The whole assortment of hundreds and thousands of propaganda stories revolve around a dozen original storylines.

To see the forest through the trees

Day after day, Russian national television stations, big news and multimedia agencies, and dozens of smaller pro-Kremlin sites churn out hours of audio and video and dozens to hundreds of stories about Belarus. Targeting a Belarusian audience, pro-Kremlin resources also communicate distinctively about events in other countries.

At first glance, it would seem that hundreds and thousands of propaganda stories, interspersed with neutral news and information, are promoting an untold number of jumbled statements. This is partly true. Even very close messages from two different sources may differ slightly and have their own traces. However, even with their myriad shades, virtually the total of pro-Kremlin propaganda in Belarus revolves around a dozen of the same storylines.

In the most general terms, the basic stories that the pro-Kremlin media sell to Belarusian audiences can be described as follows: the West in all its manifestations is bad and aggressive towards Belarus, Russia, and other countries beyond its control and that Belarus belongs to the Russian civilization, its future possible only in an alliance with a good Russia or as a part of it.

These fundamental propaganda statements can be broken down into several more specific storylines. My research “Pro-Kremlin Propaganda in Belarus: Classification of Narratives” offers a categorization of 25 specific propaganda narratives on which thousands of propaganda materials targeted at Belarusians are based.

Narratives are the original storylines that shape the message of stories. The propaganda does not try to give an objective assessment of what is happening; it already proceeds by default on the assumption that Belarusians do not exist as an independent people; that there are pro-fascist authoritarian regimes in neighboring Ukraine, Lithuania, and Latvia, and Poland; and the West as a whole dreams of bringing harm to Belarus.

The twenty-five narratives that serve as the basis for almost all of the pro-Kremlin propaganda in Belarus can be divided into four groups based on the object of the narrative: Belarus, Ukraine, Poland and the Baltic countries, and the collective West as a whole. 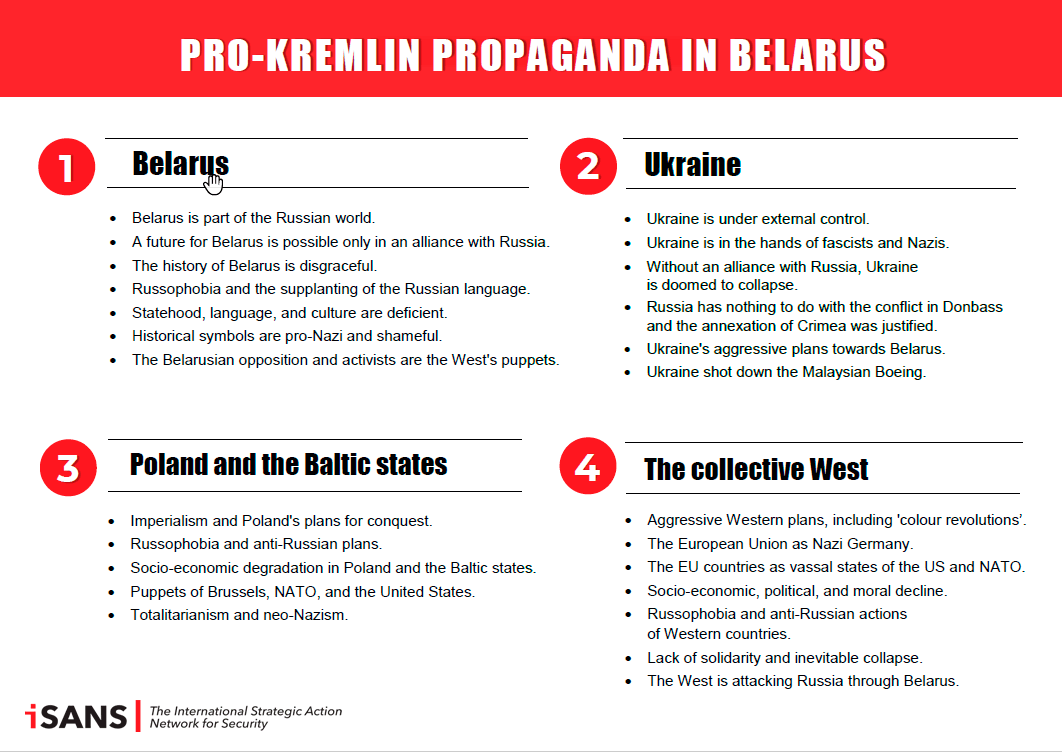 The increased attention of the pro-Kremlin media in Belarus to Ukraine, Poland, and the Baltic countries relates to plans to consistently discredit all neighboring countries of Belarus except Russia. “But the regimes ruling in the Baltics, Warsaw, and Kyiv trace their ancestry back to the pre-war regimes in Poland and the Baltics, as well as to the Banderites in Ukraine. All these regimes have shown solidarity with Hitler,” frightens readers of one of the columns of Sputnik Belarus.

The hint is obvious: since modern Lithuania, Latvia, Poland, and Ukraine have set themselves with Hitler, then Belarus has only one neighbor that is unsullied. Incidentally, parallels with Hitler’s Germany and accusations of fascism/Nazism and their support are a classic propaganda technique to discredit Western states.

As for the section on Belarus, the selection of propaganda narratives is as follows:

Based on these assertions, an untold number of stories denigrates any Belarusian political and public figures, gives an absurd interpretation of any Belarusian historical events, and discredits a range of Belarusian national heroes. Tikhanovskaya is pronounced a toy of Lithuania, Poland, and American special services, Kalinouski is declared a terrorist, the founders of the BNR are criminals, and even Francysk Skaryna is pushed into the background.

For example, one of the propaganda sites claims that “the real tradition of Slavic book publishing in Belarusian lands” originates from Ivan Fedorov rather than from Skaryna, although Skaryna’s Psalter (1517) was published even before Fedorov was born. Another online resource juxtaposes Skaryna with Vasily Koren, a Belarusian native, though his works were published 170 years later than Skaryna’s. Koren, who emigrated to the Russian Empire, “worked in his native country, while Georgiy Skaryna worked primarily in European countries,» the article explains. This, in fact, is the reason for the promotion of the alternate first printer.

Attempts to emasculate Skaryna’s image look completely absurd but are quite logical considering propaganda narratives about Belarus as part of the Russian World and its history as part of Russian history. It is from here that stem the attempts of pro-Kremlin propaganda to belittle all significant images, events, and figures associated with Belarusian statehood. Pro-Kremlin propaganda does not at all like the fact that book printing appeared on Belarusian lands much earlier than in Russia. After all, this contradicts the premise that the Russian state has invariably been the source of all technological achievements and cultural innovations for the dim Belarusian people.

In combination with anti-Western narratives about Poland’s hostile and imperialist plans and an aggressive and hostile West and Ukraine, anti-Belarusian storylines give rise to a crazy conspiracy regarding the Belarusian opposition’s plans to orchestrate genocide of the Belarusian people at the request of the West, set fire to forests in the Chernobyl zone of Kyiv, and much speculation about a “color revolution” with the assistance of Lithuania, Poland, the Anglo-Saxons, a puppet Ukraine, the Vatican, and others in league with them. By combining different narratives and proposing slight changes, the pro-Kremlin propaganda machine reconstructs the many incredible propaganda stories that are fed to a Belarusian audience.

***
This article is also available on Visegrad Insight.