The New Face of Belarus

Every year, Globsec and the Czech Euro-Atlantic Council Jagello 2000 honour personalities who have significantly contributed to the quality of transatlantic relations. This year’s Freedom Award were granted to Belarusian opposition leader Sviatlana Tsikhanouskaya as well as the former Czech foreign affairs minister Karel Schwarzenberg.

Below you can read the laudatio given by Pavol Demeš to celebrate Tsikhanouskaya and her outstanding leadership and the courage of all the Belarusian people in their struggle for democracy.

It is a great pleasure to be here giving this speech in honour of Svetlana Tikhanovskaya. GLOBSEC has made an excellent decision in awarding Svetlana this special award at a very challenging time for her and her country.

Why am I speaking today? I think that the organisers needed for this laudation somebody, who is COVID-19 negative and Belarus positive. I must admit, I simply admire Belarus and its people for a long time.

Svetlana has just arrived in Bratislava from the capital of Germany, Berlin, where she was received by Chancellor Angela Merkel, members of Bundestag, the Foreign Minister and excited Belarusian diaspora, NGO representatives and many media representatives. She was treated in Germany as a true leader, with big respect and admiration.

Tonight, on the banks of the river Danube in the Maria Theresa room of the Grand Hotel River Park, Bratislava, Svetlana will receive the GLOBSEC Freedom Award, which is bestowed upon the people of Belarus, in recognition of their peaceful and courageous drive for democracy, freedom and human rights. 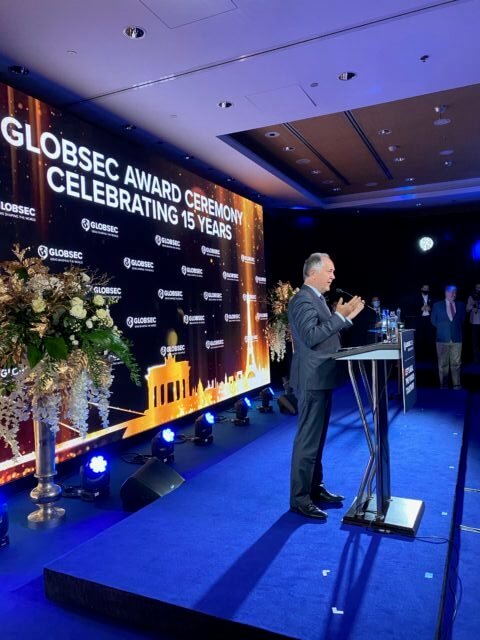 Until recently, Belarus lived an isolated and state-controlled life under the dictator Alexander Lukashenko. Throughout his 26-years of rule, many civic and political leaders tried to change the situation. Unsuccessfully. Many of them were persecuted, lost their jobs, were beaten, ended up in prisons; some disappeared and lost their lives. Thousands of Belarussians left their homeland not believing in change, forced to leave the country which they love.

Key international institutions, including the UN and the OSCE, repeatedly stated that Belarus is blatantly violating human rights and ignoring civic and political freedoms. The Lukashenko regime, based on oppressive machinery which has overgrown every aspect of life, did not care at all.

Suddenly and surprisingly, things started to change this year. Lukashenko underestimated three things – first, the coronavirus, second, Svetlana Tikhanovskaya and third, the bravery of people, particularly the young generation who are masters of social networks.

In the spring, the autocrat labelled the pandemic an “international psychosis and panic” and he selfishly exposed his own citizens to serious health risks. In the summer during an election theatre without international observers, he wanted yet again to confirm his unshakable position. He arrested two other presidential candidates, expelled one from the country, and several critics ended behind bars.

The illegitimate and brutal President Lukashenko and his followers thought that things will go as before – with pre-cooked figures and results. But he made a big mistake. He allowed an unknown brave young teacher and loving mother to run in the elections – the wife of the imprisoned presidential candidate Sergey Tikhanovsky, who remains in custody today.

Svetlana had no access to the national media to compete fairly with the dictator. But through her travels across the country, accompanied by another two remarkable women – Maria Kolesnikova and Veronika Tsepkalo, she was able to mobilise people’s hopes for freedom and dignity and became the new face of Belarus at home and abroad. She raised the prohibited historical national white-red-white flag of freedom so high that people in every corner of the country could see it. And not only in Belarus but around the world. She won the hearts and minds of people in an unprecedented manner. 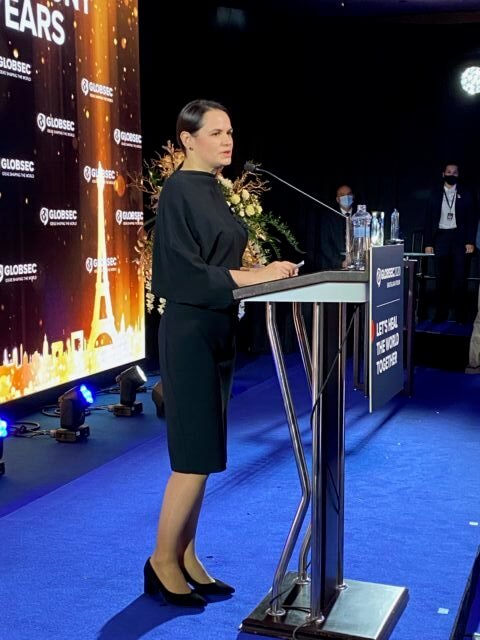 Masculine power holders, with or without masks and guns, thought that if they expelled Svetlana from her motherland to neighbouring Lithuania, after the rigged elections, she would just disappear. She would start taking care of her two children and simply disappear. And life will go on under the iron fist as before.

On the contrary. Tikhanovskaya and her exiled colleagues continued their fight with tens of thousands of brave people with newly awakened feelings of unique patriotism peacefully protesting across the country in a struggle for a new and civilised Belarus.

As a representative of Coordination Council, Svetlana now travels across Europe and mobilises also our responsibility and commitment to values and principles. Her key weapons are authenticity, modesty, bravery and dedication. People in Belarus can see that their leader is welcomed with open arms in parliaments and governments of democratic countries. They can see that their leader can walk freely on the streets of European capitals and is admired by people and is depicted by the most prestigious media.

We all know that Belarus is still too far from celebrating the victory of human rights and democracy. The Slovak and Belarusian languages have many similar words. One of them is embodied in your first name, as well as the name of your colleague – Nobel prize laureate Svetlana Alexievich. Svetlo – meaning light.

Please accept this award as a small piece of light and encouragement for you, your family, political prisoners and all the brave people of your country.

Last night accepting @GLOBSEC 2020 Freedom Award in Bratislava for leadership and courage while representing all the Belarusian people and their unceasing struggle for democracy. I am deeply touched and honored, thank you! pic.twitter.com/rI12Y3HuZj

Pavol Demeš is a former foreign minister of Slovakia and a member of the Board of Governors of the European Endowment for Democracy.

***
This article is also available on Visegrad Insight.