Inside the system: what a Belarusian journalist saw in prison

Belarusian journalist Yan Auseyushkin was arrested and imprisoned while covering the country’s pro-democracy protests. Inside the prison system, he saw beatings, humiliation and ill treatment.

As a journalist, I have repeatedly written about how people are detained in Belarus, covering criminal courts and administrative trials. Being arrested for between three and 15 days was seen as something ordinary – a routine punishment, relatively safe and harmless. I thought so myself, until I found myself in prison last month.

I was detained while covering a protest in Minsk on 8 November. Here, the nuance is that it is almost impossible to hold a public protest legally, and any street events are now outside the law. This means that everyone present automatically becomes “participants in an unsanctioned public event”. Until the Belarusian presidential elections in August, the authorities used to observe some rules regarding journalists, who would be detained and then released. But starting in September, Belarusian journalists began to be detained en masse, and deemed participants in protest actions.

That Sunday, there were reports from the start that journalists were being deliberately detained, so I hid my press badge under my jacket. When the police officers grabbed me, I managed to show it, but it didn’t help. The riot police constantly asked about my accreditation – apparently, they had been instructed that only foreign correspondents with accreditation from the Belarusian Ministry of Foreign Affairs are journalists. The simple press cards of local journalists do not concern them.

The only thing that the press card helped me with was that the police did not beat me. They only hit me once in the stomach while they were taking me to the minivan. There they demanded the password to my phone, which I refused. Then one officer threatened to beat me, but went no further. Others were less fortunate.

Physical abuse usually occurs during arrest and immediately after. As a rule, the arresting group of officers – most often riot police – throws the protesters into a small minivan and drives to the next location. The whole operation is done on adrenaline, aggression, constant swearing and insults. Interestingly, when it comes to people’s phones, police officers never remove data from the devices. They ask for passwords, it seems, for their own entertainment – a chance to delve into other people’s lives.

More than a dozen people whom I met in prison told me similar stories: a person is asked for the password to their phone, they refuse, and then police officers start beating them. A young student wound up in the same police van with me when I was arrested. He also did not give up his password at first. But they began to beat him on the back of his head with the butt of a shotgun, and after the tenth blow, he agreed to give the password. Officers rummaged in his phone, found photos from other protests, but nothing happened to him as a result. The injuries, however, turned out to be serious – most likely his hand was broken (the bone was protruding from the skin), and there were symptoms of a concussion. An ambulance took him to the police station.

Another example: an officer from an organised crime unit purposefully beat my cellmate on his leg for several minutes. Having failed to obtain the password, the officer began to break the man’s fingers, saying that he would break them and nothing would happen to him. He had to stop this when detainees were transferred to another vehicle.

There was less violence at the police station and detention centre, but it still took other forms. In one police station, my cellmates later told me, people were kept in an open-air courtyard for 10 hours until they were loaded into police vans and taken to isolation wards. They talked about how people who defied the police officers were taken to the toilet and beaten, but these were already isolated cases. Most ordinary policemen – those who filled out the paperwork – guarded us, but treated us quite calmly, without aggression or humiliation.

For people at protests, the situation in Belarus’ prisons is completely different, where the main focus is humiliation and constant inconvenience. When we were taken to the prison in Zhodzina, a city northeast of Minsk, which is known for its harsh treatment of prisoners, we were forced to trample on a white-red-white Belarus flag – a popular symbol of resistance – lying on the floor as we entered. Moreover, this kind of attitude was encouraged – we were later ordered to throw rubbish at the flag, and officers regularly laid flags for us to walk on when we were taken out for exercise.

It was in Zhodzina that the most difficult, humiliating episode of my interaction with Belarusian law enforcement took place. The different wings at the prison in Zhodzina are connected via a system of underground corridors, about several hundred metres long in total. On one evening, late at night, we were led into one of the corridors, and ordered to squat down and move forward in the same squatting position.

Considering that it was three or four in the morning, and we were already exhausted, it was extremely difficult to walk. This exercise was all accompanied by kicks and blows for those who could not walk, who got up, or were simply not in favour with the guards, as well as insults and mocking shouts. When we finally reached the end of the corridor, we were placed standing, with our legs stretched wide apart along the grate – hands on the grate, palms facing us. Anyone who twitched, twisted their head or moved could be hit. We stood like this for 40 minutes – exhausted, depressed and hardly able to stand on our feet.

Even at the stage of drawing up reports, the police officers told us directly: you can sign, not sign, agree or amend the testimony, it will not affect anything. Many had the same witness in their arrest reports, who apparently was in several places at once

I used to think that serving a short sentence in prison is when you sit quietly or lie down and read books. Every action of the guards was aimed at telling that we do not belong to ourselves. They sought to inspire a feeling of complete powerlessness and insecurity with everything they did – physical violence was used rarely, but there were constant threats. Plus, we were regularly deprived of small domestic items that your existence depends on inside those walls. You are constantly shouted at, and any rustle at the door makes you jump anxiously. This gives you the feeling that at any moment anything can happen to you.

The attitude of individual officers does not affect the overall situation. One and the same prison overseer could behave both adequately and unreasonably cruelly in different conditions. Inside the prison system, both prisoners and the police themselves are not protected equally. Far from all officers had body cameras, and a culture of denunciation flourishes among law enforcement. In the event of a real incident – a serious trauma, death of a prisoner – it will be impossible to prove that it is an accident. Just like deliberate beatings. We did not experience targeted torture, but individual officers could kick you or use their baton against a hesitant arrestee.

As to COVID, the guards were very afraid of being infected, and most of them wear masks. In addition, despite their disregard for prisoners, they would demand that we put on masks whenever we encountered a guard – when leaving the cell for a walk, search, roll call, etc. In overcrowded and densely inhabited conditions, the masks in cells were of little use. In Zhodzina, there were 17 people in a six-bed cell, where there were only three two-tier bunks (then some were taken out, and there were 13 of us left). While in Mahiliou, there were 16 people to 16 bunks in our cell, but it was very moist inside, with water running down the walls. Many fell ill, and on leaving at least three people had confirmed cases of COVID-19.

A few words about the trial. Even at the stage of drawing up reports, the police officers told us directly: you can sign, not sign, agree or amend the testimony, it will not affect anything. Many had the same witness in their arrest reports, who apparently was in several places at once. The judges did not take into account the circumstances of other detainees (age, children, first time detained or not). There were men in my cell with three or four children in a family.

The trial itself was carried out in prison and lasted less than a minute – the judge silently looked through my arrest report, read out my edits (I stated that I did not agree with the protocol, did not participate in the action and had been carrying out my duties as a journalist). She asked briefly what my suggestions were and, after listening to the answer, she fired off: “15 days”. The situation was not very different for other people, except that another judge imitated some kind of legality, offering to reduce their sentences in exchange for an admission of guilt.

What happens outside prison is, alas, also important. When you are in isolation, you cannot tell anyone what is happening to you. Relatives do not know anything, there were no official arrest lists in the first days, and they had to rely on fragmentary and unconfirmed data. In my case, my family knew that I had been transported to Zhodzina, that there should be a trial, and then they would find out exactly where I was. But after three days they had still not been informed that the “court session” had taken place. It was not clear where I was, should I be released or not, and what was happening in general. This has a very depressing effect on people.

The most important thing that I saw and realised is the solidarity of Belarusians.

Detainees got to know each other quickly and began to act together. Differences in character, financial situation, social status was pushed aside: everyone understood that they were here for one reason that unites everyone. This also helped to endure the moral pressure that the system put on us: people willingly shared with each other things that came in parcels, supporting each other at difficult moments. As to “reeducation” or “changing views” – everyone just made sure that they did everything right. I don’t know a single person who began to see the Belarusian government in a better light after everything that they went through in prison. The same applies to relatives: even people who were apolitical have changed their opinion on Lukashenka to a negative one after dealing with law enforcement.

I was much more fortunate than others. I was not beaten during my arrest, and I had no major health problems. It could have been much worse, as I later found out: a neighbour of mine received three broken ribs and fell ill with COVID. Despite this, we were still kept in much better conditions than people detained in August, immediately after the election, when Belarusian police stations and prisons were turned into torture centres, where people were given serious injuries and ambulances took them away en masse. Judging by what I saw, without major changes, this could be repeated at any time.

***
Yan Auseyushkin is a journalist for BelaPAN and iSANS investigator.
***
This article is also available on opendemocracy.net. 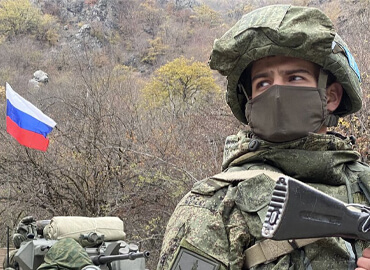 On the brink of a new Cold War 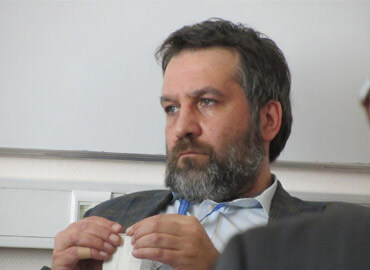 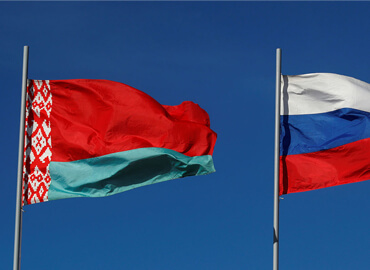 Settling up with Putin 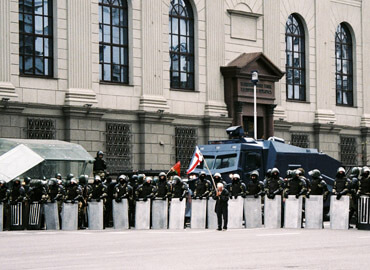 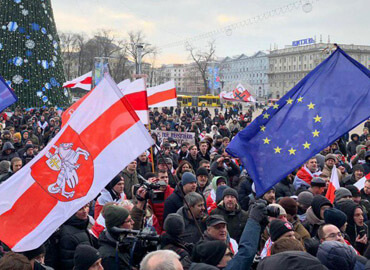 Belarus and the New Europe

Why the Belarusian protest «does not expect help from Europe» 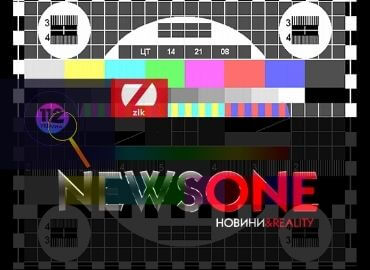 In the Face of a Kremlin Threat

What does the blocking of pro-Russian television channels in Ukraine mean for Belarus?