TikTok is rapidly gaining popularity in Belarus as a platform for the dissemination of political content. An analysis of the most active TikTok propaganda accounts uncovered interesting trends.

TikTok is one of the most popular social networks in the world. Launched in China in 2016, it is used to create and share short videos using popular music clips, visual effects, and filters. An important role in this social network is played by hashtags, which serve not only as a search tool, but also as a tool for organizing content.

According to Sensor Tower, TikTok is the most popular non-gaming service in the world. Since its launch, it has been downloaded from the Apple Store and Google Play more than 3 billion times. 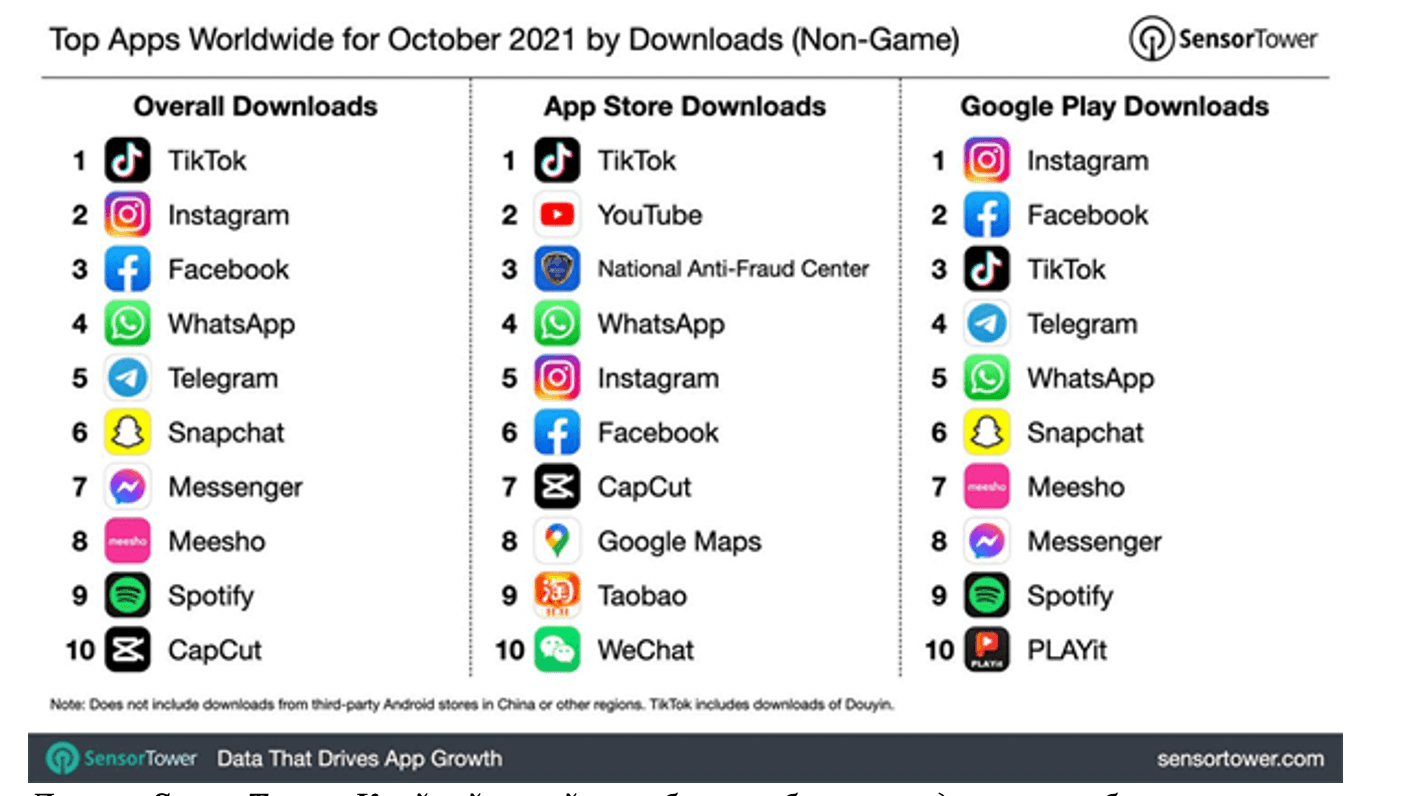 The large number of users, actively used by about 1.1 billion people, is not the only impressive achievement of TikTok. According to a recent study, over 64% of users feel they can be themselves when creating content, and 53% of users trust content created by other users. This attitude towards the social network creates trust in content and close connections between users. The same study concludes that «an average of 77% of TikTok users say TikTok is a place where people can express themselves openly.»

The wave of popularity and the trusting environment in TikTok favorably influence the promotion not only of advertisements for commercial projects, but also for the forming and dissemination of political preferences and propaganda narratives.

The growth in popularity of TikTok in Belarus

According to We Are Social and Kepios, almost 3.1 million Belarusians used TikTok at the beginning of 2022, making this social network the second most popular after Instagram. In the last quarter of 2021 alone, TikTok added about 440,000 users from Belarus. If current growth rate is maintained, TikTok has every chance of becoming the most popular social network in Belarus by the end of 2022. 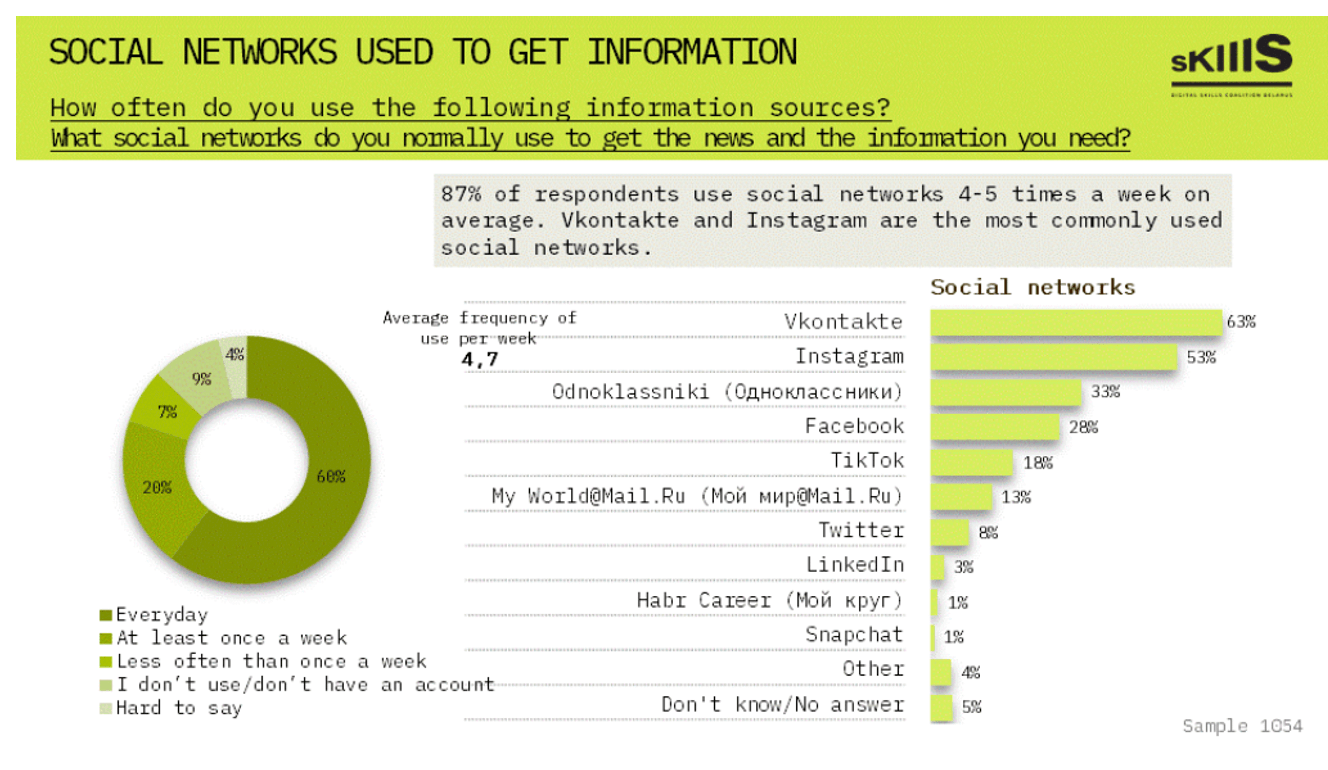 Screenshot from the study Media consumption and media literacy in Belarus in August 2021 conducted by Digital Skills Coalition Belarus. Data from August 2021.

TikTok in Belarus as an instrument of propaganda

TikTok’s audience in Belarus is predominantly young people aged 15 to 24. The age groups 25-34 and 35-44 make up a slightly smaller part of the audience. Men and women among Belarusian TikTok users are almost equally represented. This social network then can be a very effective platform for broadcasting various kinds of messages to a wide and socially active audience. It is not surprising that since the summer of 2020, in sync with the growth of protest sentiment in Belarus, TikTok content within the country began to rapidly become politicized.

The politicization of TikTok in Belarus is not an exceptional case among the Russian-speaking segment. TikTok was widely used earlier for political campaigning in Russia. This social network was a prominent element of the digital infrastructure during the elections to the Russian State Duma in 2018, the backing of amendments to the Russian constitution, and the return of Alexei Navalny to Russia. Since 2018, TikTok has been systematically used in Russia to promote pro-government commissioned videos, according to one study. Opponents of the Russian government often become victims of persecution for political statements made on this social network.

The study of the Belarusian segment of TikTok since the beginning of 2021 has made it possible to identify the 50 largest propaganda accounts. Most use a set of similar hashtags to promote content.

Types of pro-government accounts and the specifics of their content

As with Instagram, propaganda accounts on TikTok can roughly be divided into two broad categories: «collective propaganda» and «regime supporters.» In the first group of channels, the author (or group of authors) of the content and the owner (owners) of the account are unknown. In the second group of accounts, the authors do not hide their identity and present themselves as recognizable «opinion leaders.»

«Collective» accounts most often use video clips from propaganda programs of state television channels for content as well as materials from law enforcement agencies. Among creators of individual TikTok accounts, videos in the form of video messages from creators are very popular, as this is an easy and cheap format for creating videos. Owners of individual accounts address questions left as comments and speak out on current political events.

Often, videos are used to dehumanize certain social groups and promote manipulative messages. For example, one video explains who zmagars are. A popular pro-government blogger interprets the Belarusian word zmagar, which propaganda sources uses as a marker word for political opponents, as follows: «For those who don’t know, these are people who are glad that artists won’t come to Belarus and won’t perform for Belarusians. They are happy that sanctions are being imposed against Belarus.» Using labels and stereotypes replicated by propaganda, the image of «enemies of the people» is created relative to political opponents.

Bloggers with TikTok accounts in the «regime supporters» category often maintain personal accounts on Instagram, duplicating content. This is a common practice, given that creating original posts for multiple social networks can be quite a complex and costly task. Many are members of the pro-government associations Union of Bloggers of Belarus (Aleksey Golikov, Tatyana Sidorovich, Dmitry Empat, etc.) and the Center for New Media (Yulia Khomich, Styusha Time, Anton Shabashov, etc.). Some members of these two groups combine their TikTok videos and Instagram posts with work in state media outlets or by speaking at advocacy events.

Like with Instagram, TikTok advocacy accounts are often forced to change their names to avoid being banned due to massive complaints from real users on TikTok. For example, in 2021 blogger Anton Shabashov kept his account under the nickname yashabash, but at the beginning of 2022 he changed the name of his profile and started using a different nickname (antohakrasava1), and blogger Styusha Time changed the nickname styusha_time to styu_time. This practice makes it difficult to keep track of their posts, including for their subscribers.

Although the conflicting sides occasionally use the hashtags of their political rivals to expand their reach and broadcast their messages to political opponents, this phenomenon does not significantly affect overall performance.

The number of subscribers and level of audience engagement of the most popular pro-government TikTok accounts are slightly lower than those representing democratic forces and independent media. 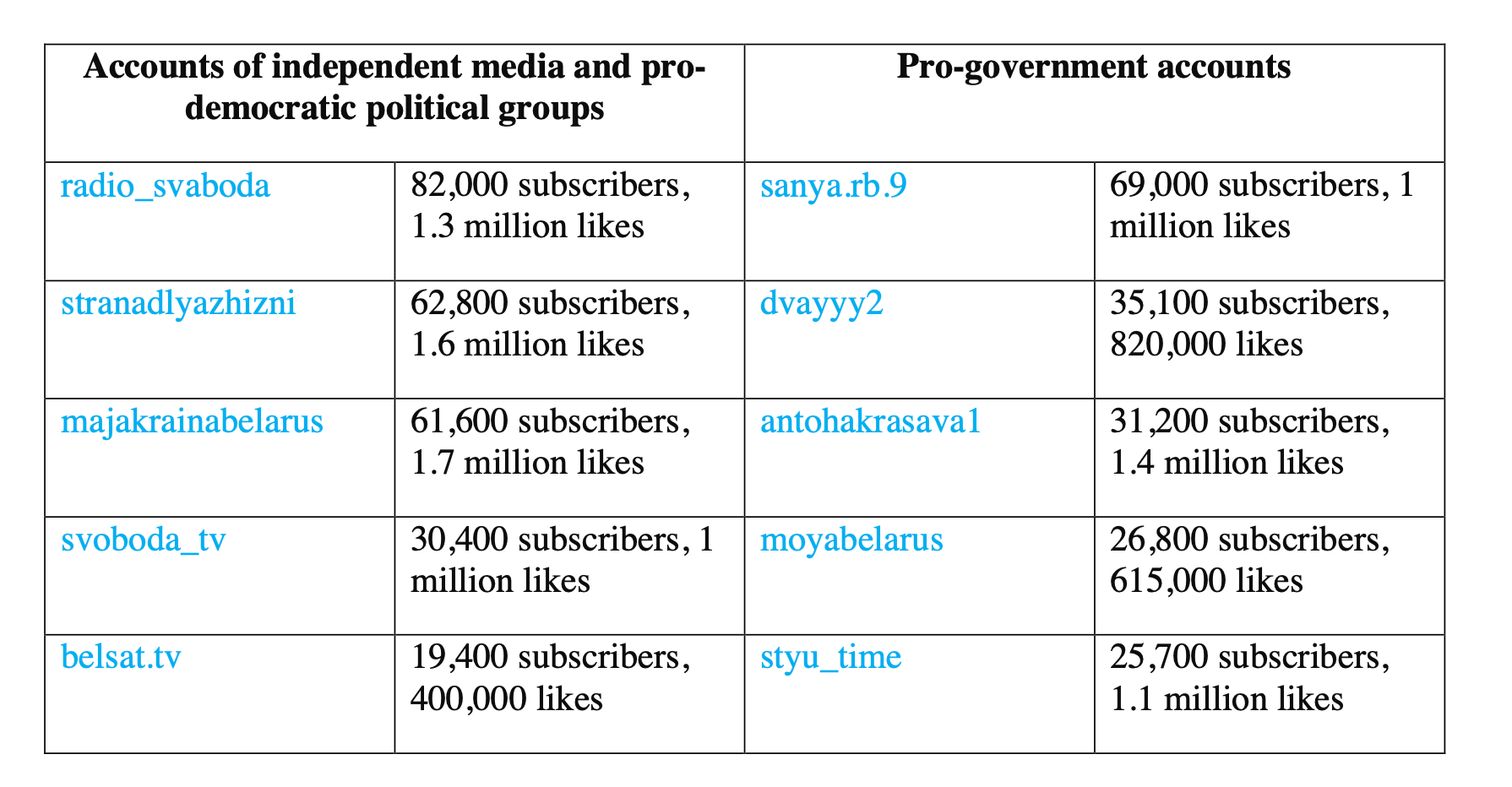 At the same time, the difference in the number of subscribers in favor of pro-democratic forces in TikTok is noticeably smaller than observed in Instagram. Likely, many representatives of democratic forces and independent media still underestimate this social network as a platform for more active promotion of their content.