Just before the presidential elections in Poland, the portal Obserwatorpolityczny.pl resumed its activity, which in 2014 became famous for the fact that it became the official partner «in the great work» of the «Russkij Mir» foundation, established in 2007 by decree of President Vladimir Putin. The Foundation Council includes, among others, the Russian Minister of Foreign Affairs and the Russian Minister of Education. The portal publishes not only in Polish, but also has a Russian and English version. The Observer’s page on Facebook is watched by over a thousand people. For now – as Facebook statistics show – most of the viewers’ profile readers come from Moscow. The Polish editors like profile of «Spetsnaz – special units of the Russian army» and «Vladimir Putin – official website». 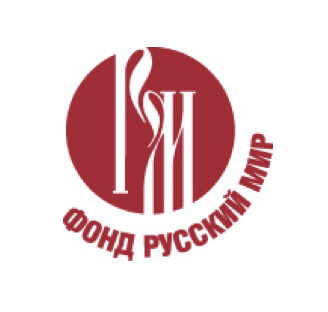 Messages typical of the pro-Kremlin propaganda can be found here in many articles.

Tuesday March 4, «Observer Polityczny» writes on its website
«The West must finally learn Cyrillic enough to understand that Putin is not Yeltsin or a flaw in honour – Gorbachev. The times of soft politics are long behind Russia; if it wants to, it can attack Europe today and nobody will have it. oppose – these are the facts! Meanwhile, the compromised USA, NATO and the EU may kiss the Russian bear in …! «.
It was the thesis that NATO and the EU failed the test that was picked up by the propaganda station Russia Today and quoted the comment of the «Political Observer» as the independent voice of the Polish media.

On September 7 the article «The West will never abandon Belarus» was published . The author, signing the krakauer writes: ”… There is also a Polish neighbor, who suffers from total amnesia and pretends that the reality in the West is pink — he is waiting there for Belarusians with open arms. The only thing that is not said is that it is about picking strawberries, working 16 hours a day without insurance and other forms of extreme exploitation, which is beyond the limits of serfdom and slavery. Therefore, the Polish neighbor encourages to rally, protest, sing songs, without giving any conclusions from his own history, from his victims, from his own mistakes. This is not shown to Belarusians, it is not told. It’s a pity, because a film about Łódź, Wałbrzych, or the state farms (PGR) of Western Pomerania could help them a lot, especially to show what the road to the West looks like, how much it costs and what the consequences are».

“Such West has nothing more to offer Belarus than to be a buffer place between East and West, which produces a whole range of useful things and exports to the West a humble and undemanding labor force.”

“In the age of electronic media (no mistake here), many have allowed themselves to be manipulated. Reaching the majority with an objective message, showing the consequences of the revolution — because we are talking about it — will surely make the Nation not only reflect, but also make the troublemakers and those who wanted to set fire to their peace on fire.”

Monday, September 28th, an article was published: Why won’t «Majdan» in Belarus?”. The author Mikołaj Kisielewicz writes, among others… “The pronunciation of the youth present, who are demonstrating mainly young people, including many women, takes on a different meaning. The fact that there are people in Belarus who are dissatisfied with the government and the president, especially young people, does not mean anything extraordinary. Today it is difficult to find a country where there are no dissatisfied citizens. I don’t mean only France (yellow vests) or the United States (Black Lives Matter), but even in Switzerland, Germany, Norway and Sweden some citizens are dissatisfied with the way the state is governed. There are demonstrations in the world, there will be demonstrations in Belarus. These are the times.

All that remains is to find an answer to one more question, rhetorical, which applies to us and other neighbors of Belarus. Doesn’t dealing with the internal problems of another state distract too much attention from your own problems? Won’t the proverb saying that «he who reigns by sword dies by sword» come true?”

However, interesting are comments of Internet users, which prove that the Obserwator Polityczny has its own recipients who share their opinions. Here are some of them:

“Non-electionists: I fully agree with what the author wrote. I have only one remark – the destructive role of our country [Poland] has been clearly diminished, both in Ukraine [the Orange Revolution and later Maydan] and now in Belarus.
One can only wonder to what extent our «Eastern policy» is the result of orders issued by a certain embassy [USA], and to what extent it is our own stupidity, i.e., messianism and a Giedroyć vision of the federal East. I wish the Belarusians did not end up like the Ukrainians on the apex-radiated UPAland [they lost their jobs and in return got the cult of Bandera].” 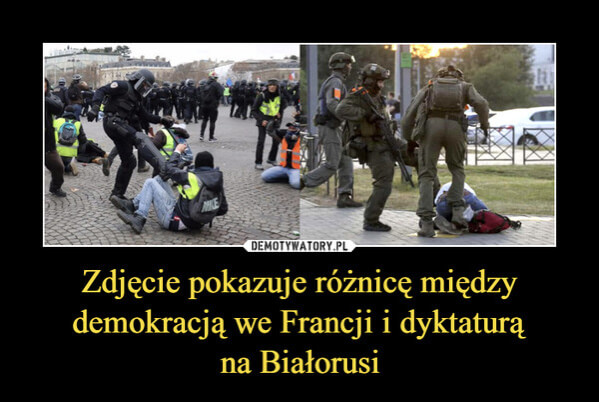 The Russki Mir phenomenon is a concept much broader than just the activities of the foundation of the same name. In public discourse, the policies of Russian President Vladimir Putin are primarily based on the ideology of the Russian World, which is a prerequisite for building a new Russian Empire as a bloc of countries historically and culturally connected with Russia or countries that do not interfere with building such an empire. One tool for implementing such soft power policies is the media. That’s the role Sputnik and RT play.

Sputnik Polska is an officially financed editorial office by a Moscow-based foundation. On Facebook, Sputnik’s website is watched by 5,500 users.

In an article from September 9, entitled «Lukashenka: wait a week and see what happens in Poland,» the author writes: “Poland, which criticizes the «unfair elections» in Belarus, should deal with its presidential elections in July. Why are the Lithuanians, Poles and Ukrainians coming to us? Because they have a catastrophic situation, it is necessary to distract the attention of the inhabitants, and it is best to show with a finger that we are responsible for it. So, a little more patience — soon people will take care of them…”

On October 15, 2020, Sputnik Polska, based on the Moscow Radio Sputnik, quoted Sergey Lavrov (Russia’s Minister of Foreign Affairs), who gave new instructions on the development of the situation in Belarus. Lavrov said “As for Belarus, I am convinced that our line of support for the constitutional reform first proposed by President Alyaksandr Lukashenka, which we consider a good reason, a good opportunity to start a truly national dialogue with all the political forces of the country, seems to me that this line is now the most optimal. ” Lavrov also commented on Svietlana Cihanouska’s meetings with Western leaders: «No one even pays attention to the fact that this is also an interference in Belarus’s internal affairs.»

Witold1: “The talks between European politicians and the real President of Belarus, Cichanouska, are a necessity to restore the rule of law in Belarus and deprive the Lukashenka regime of the possibility of harming and defrauding its own citizens, while the murmurs from the Kremlin no one in the west cares about what they prepared their own opposition like the killed of Niemcov or an attempt to kill Navalny.”

Sputnik Polska draws not only from the resources of the Russian Sputnik. We often see two Russian global broadcasters — Sputnik and RT — produce similar information. On September 8, President Lukashenka gave an interview to four Russian media. Sputnik Polska reprinted the interview and photos from this meeting for RT. Lukashenka stated that he absolutely did not intend to resign as president and added “I will not just quit. Moreover, if I leave, my followers will be murdered! ” The Belarusian politician also pointed to the «guilty» of the actual situation in the country. In his opinion, it is primarily the Americans who operate through the centers in Poland and the Czech Republic.

Both editorial offices are seen as the Kremlin’s media tools. More and more countries are blocking the broadcasting of RT and Sputnik. RT and Sputnik are aware that we know about their activities, but they do not care about it. Moreover, they even joke about it. Advertisements of RT were suspended in London and Paris underground stations: Missed your train? Did you lose your voice? Blame it on us! Watch RT and find out who we are. 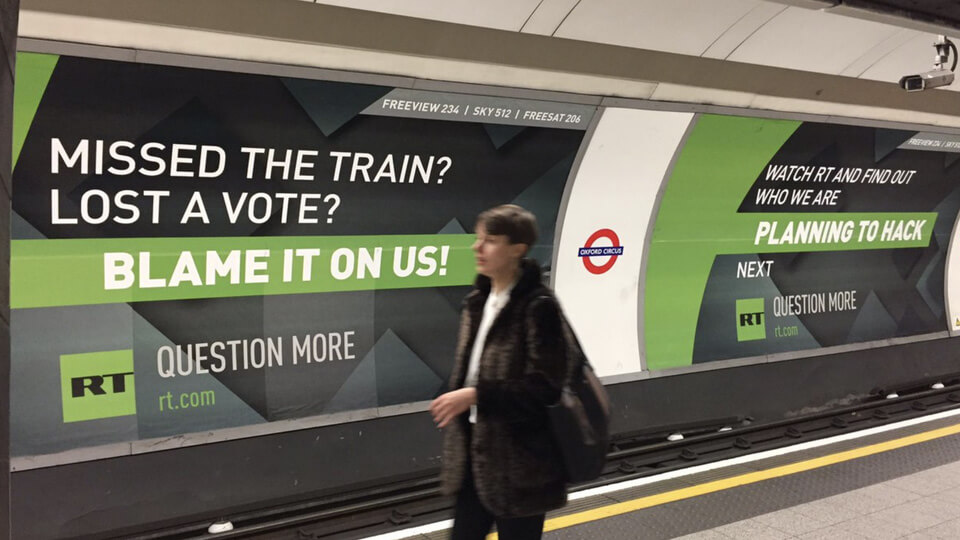 According to Russkiy Mir, its a generous donor with a budget of $ 10 million annually. On the foundation’s website, you can find a dozen Polish institutions and associations officially financed by Russkij Mir. Among them are universities, associations, language schools from various places: Warsaw, Kraków, Gdańsk, Wrocław, Słupsk, Rzeszów…

Russkij Mir actively supports the creation of Russian language centers in Poland, e.g. in 2008, at the Pedagogical University in Krakow, he renovated and furnished the premises of the Center for Russian Culture and Language.
The Moscow foundation also established centers similar to those in Kraków at the Maria Curie-Skłodowska University in Lublin and at the municipal library in Słupsk.

With the money from the grants, Russia builds a zone of favorable influence and finds recipients also in Poland. The texts of the two broadcasters above find their recipients, and the discussions below show that they also have supporters.

The concept of the «Russian world» includes not only the community of the Russian language and culture, but also the preservation of conservative values ​​and a cultural confrontation with the supposedly godless and dissolute West. Hence the fight against LGBT, close cooperation with the church on the «spiritual renewal of the nation», the attitude towards the European Union, and even 5G masts! With this approach, Russian soft power also finds supporters in Poland.