Features of the development of regional propaganda Telegram channels in Belarus

A surge in the number of local Telegram channels: Connection with Veyshnoria?

Over the past year and a half, the judicial authorities of Belarus, on the one hand, have included hundreds of independent Telegram channels in the category of «extremist,» while on the other hand, the number of pro-government Telegram channels has increased many times over. Their number at the end of 2021 was close to 150. Among them, more than 20 are propaganda channels which, in their name, description or agenda there is a link to a particular region or regions of Belarus.

Most of all local propaganda Telegram channels were found in Vitebsk (9) and Grodno (8) regions (Glubokoe, Zelva, Ivye, Lepel, Postavy, Ushachi, Sharkovshchina, and other regions). They began to be created en masse in late August to early September 2020, when the enormous role Telegram played in informing the population became clear. Most channels in the Vitebsk region were registered on August 21-24, 2020, and in the Grodno region on September 2-4.

Perhaps the concentration of local propaganda Telegram channels in these regions is due to residents living in several densely concentrated areas of predominantly Catholic faith. In approximately the same regions, the command of the Belarusian-Russian military exercises Zapad-2017 identified the virtual country of Veyshnoria as a potential hotbed of separatism. That said, among provincial propaganda Telegram channels there are quite a few cities and districts that extend beyond this virtual region.

It seems that compared to several «nationwide» Telegram channels, local channels are deprived of access to resources and specialists in promotion and content formation. They receive minimal advertising support from their more massive «national» counterparts and have a limited audience. It seems that most were created to order in the shortest possible timeframe and stuck to the same pattern: mass reposts of stories from official pro-government media and large propaganda channels, such as «Pul Pervogo.» An additional similarity is that most have practically no original content.

The largest regional Telegram channels (those with more than 1000 subscribers)

It should be noted that the number of subscribers, judging by the sharp jumps in audience growth of many regional channels, in many cases is associated with artificial «pumping up» rather than natural growth.

Most local Telegram channels are unable to boast of having more than 200 subscribers. However, many of them are extremely active, judging only by the number of posts. For example, the «Korelichi#raZAm» channel, created in September 2020, had only 81 subscribers and about 30 views on average as of early December 2021. However, it publishes 30-40 posts daily, most of which are reposts. It seems that the «gross indicators» for the channel have been identified, but there is no way to judge its effectiveness yet.

The channel contains links to posts from the channel of the local regional newspaper «Polymya» and is called «Korelichi Online» (90 subscribers). The style and themes of these channels are fundamentally different. If the regional channel writes more about local official news, then the propaganda channel is mostly focused on pro-government, anti-democratic, and anti-Western propaganda.

A similar situation exists in some other regional centers, with an official channel of regional news and an anonymous openly propagandistic resource that has relatively little connected with regional news. For example, in the city of Glubokoe, Vitebsk region, the Telegram channel of the local authorities is «Glubokoe district. Officially» (170 subscribers and formerly called «Glubokoe For Belarus!!!»). Posts are written in an official, relatively reserved language and the channel is dedicated mainly to regional news.

The «Vyshnevaya sgushchenka» («cherry-flavored condensed milk») channel, which also positions itself as a deep resource, mostly reposts «nationwide» propaganda Telegram channels and often employs hostile rhetoric. Attention is drawn to the jumps in the number of subscribers to this channel, which are unnatural given the small population of Glubokoe and the region. During February 2021, there was a rapid increase in the channel’s subscribers from zero to almost 1,500. Then there was a gradual drop in the number of subscribers to about 600 by the end of the year. The low engagement index (around 16%) also indicates that a large proportion of followers are likely non-authentic users. 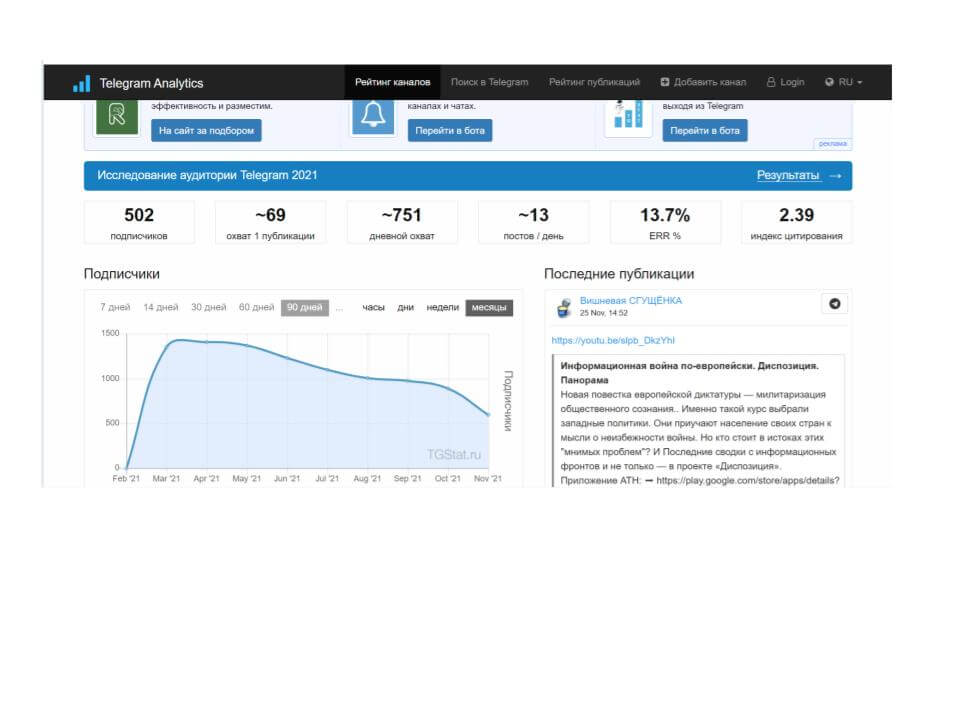 Similar trends are typical for many other regional channels. Only a few regional Telegram channels showed an increase in the number of visitors and views for December 2021. One of the rare exceptions is the «Lidchina#ZABelarus!» channel, which demonstrates a positive dynamic. However, the statistics for this channel also show signs of an inorganic, almost doubling in the number of subscribers in the last quarter of 2021. 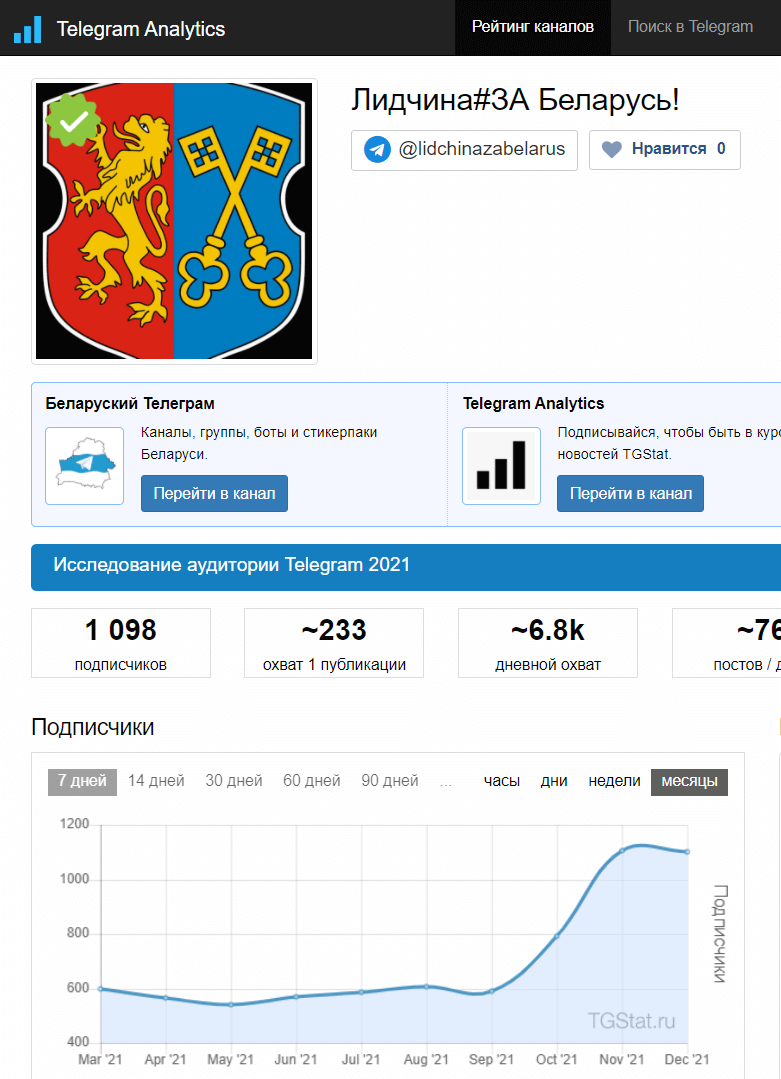 The inorganic growth of subscribers to the Lida channel is also indicated by the steady, sharp decline in the engagement index (the share of those who read posts from the total number of subscribers) over the same period, which decreased to about 20%. 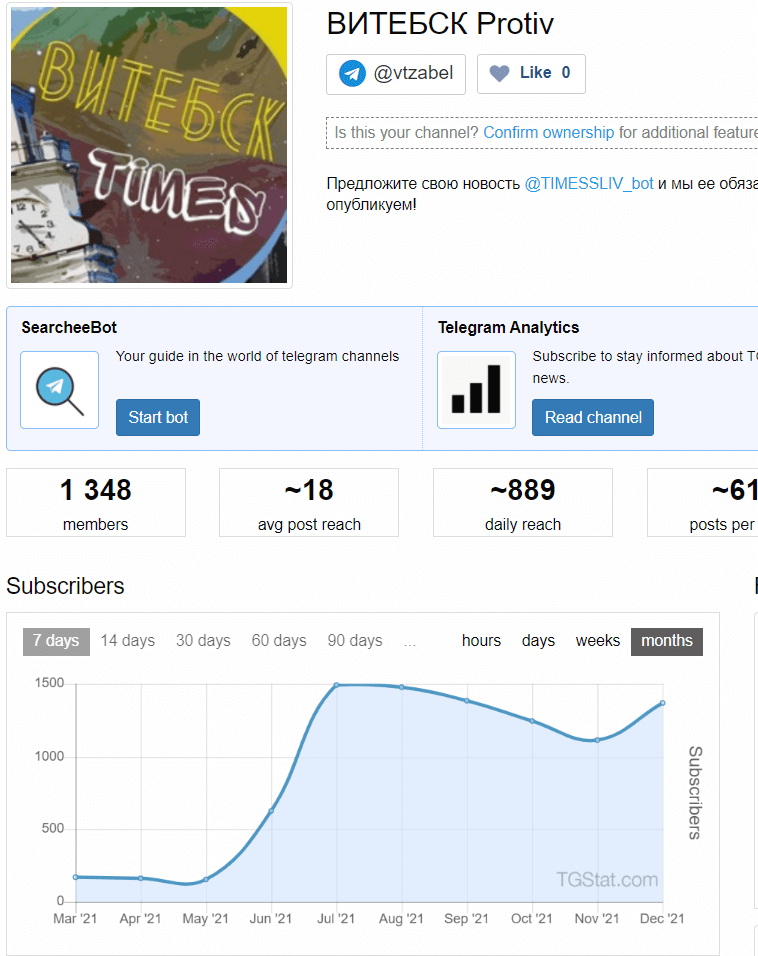 In around the same period, the same trend, albeit to a lesser extent (a sharp increase of an additional 500 subscribers), was also characteristic of the largest regional Telegram channel Reshod Reality. 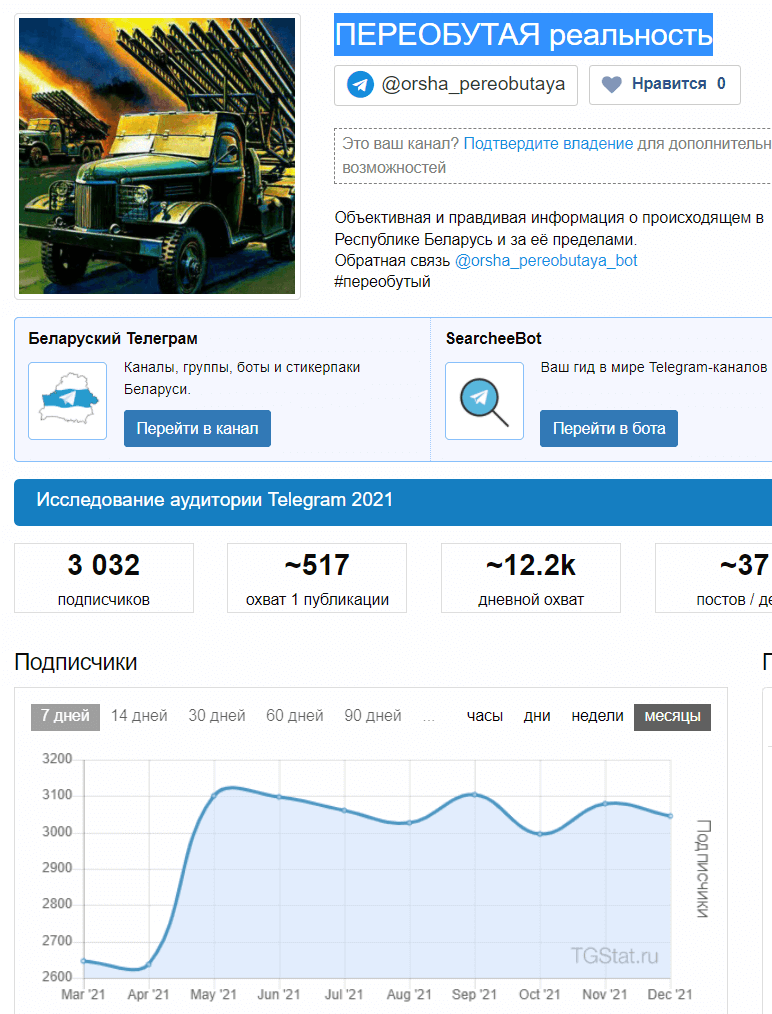 The propaganda machine is faced with a lack of resources to maintain many Telegram channels, specifically regional channels. For most of them, there is no regular local original content. Apart from several of the largest channels, which, apparently, use bots to cheat statistics, regional Telegram channels are characterized by gradual degradation rather than progressive development.