After the August 2020 presidential elections there have been many recorded incidents involving the use of hate speech by state media. Although there is no internationally recognized definition of the term «hate speech» (another common name for this phenomenon is «language of enmity»), in general, it refers to a set of linguistic means that impart sharply negative characteristics to various groups of the population on national, political, and other grounds.

On April 29, the television channel STV aired an interview with deputy head Nikolai Karpenkov in which he denigrated opponents of the government and generalized opposition members as increasingly «looking like mad dogs» and international terrorists who have, therefore, put themselves outside the law.

The alleged (and not yet proven by the court) plans of a small group of people accused of preparing a coup were applied to a huge political group of the population, indiscriminately called the «opposition.» In other words, against all opponents of the current government.

By October 2020, Belarusian propaganda had settled on the label of «zmagars» in relation to political opponents and began to systematically attribute to them various offensive connotations, base feelings, and derogatory characteristics. Denigrating techniques have included:

Order of Judas and references to Nazi orderliness

The Order of Judas segment on STV catalogs various cultural figures and political and civil activists in a list of the most desperate sinners who allegedly «disgraced the Belarusian name.»

The segment host, Grigory Azarenok, calls the nominees for the Order of Judas nothing more than «a society of people united by the sin of betrayal who hate our state more than anyone.» And he depicts them not only with the «order» caption, but also against the background of hangman’s noose. Azarenok bestows the protagonists of the programs with various offensive epithets. For example, he calls the singer Margarita Levchuk an aphid and the politician Pavel Latushko «plump and rotten» and an «alcoholic bum.» 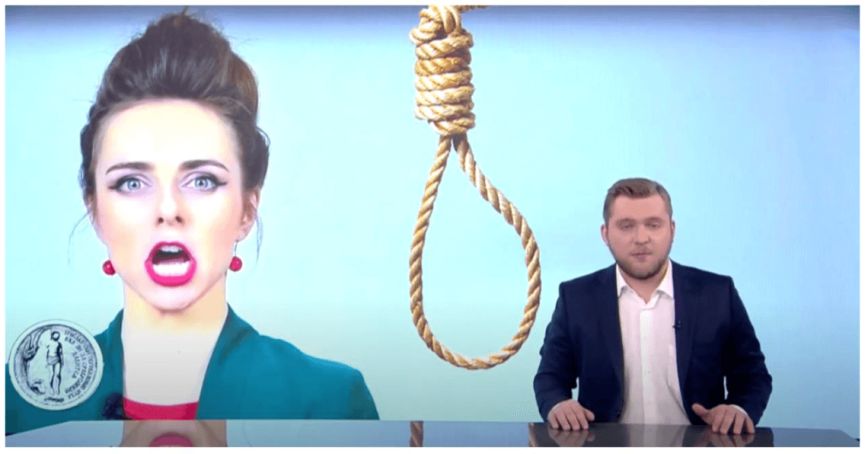 His partner at the television station Alexei Golikov, in one of their stories, spoke approvingly of the Nazi occupation and the execution of women and children for the slightest reason, saying the following about the barbaric military history:

«Everyone bought tickets, except for one woman and her granddaughter who was traveling with her. They were taken out of the train and in front of everyone they were shot right on the slope… In Belarusian society, in contrast to the post-election riots, the demand for order turned out to be quite high… I will say openly: I am a supporter of unpopular, undemocratic measures to preserve order.»

In the same report, Golikov compares the protesters with animals and thereby justifies the inhuman conditions in places of detention.

In February 2021, more than seven thousand people signed an electronic petition on the website petitions.by, appealing to the Ministry of Information to consider issuing STV a warning and to the Investigative Committee with a request to conduct an investigation of Golikov for violations of the Criminal Code for inciting social hostility and the rehabilitation of Nazism. The Ministry of Information replied that «there is no basis for resolving the issue of taking response measures» and there was no reaction from the Investigative Committee. In another of his stories, Golikov declares that the year of national unity does not imply «the unity of society with the marginalized, criminals of the law and traitors» and says this about the protesters:

Hate speech in the form of derogatory comparisons can also be found on other state television channels. For example, in a report on Belarus Channel 1, host Maksim Osipov calls some of his fellow citizens rats, describing an incident at a book fair where the «incredible people» supposedly stole a microphone in an attempt to disrupt the presentation of his colleague’s book:

«For a book exhibition, the situation is understandable: where there are books, there are often rats… Honestly, the truth cannot be drowned out by the screeching of rats or their foulness.»

The publicist of the newspaper Soviet Belarus – Belarus Today and laureate of the national creative competition «Golden Pen 2020» Andrey Mukovozchik, also uses insults against various cultural and sports figures, researchers, journalists, as well as political opponents or public activists in his articles. This is the kind of address Mukovozchik makes to the two-time vice-champion of the Olympic Games, Alexandra Gerasimena:

«So, you really are a rotten fish, Alexandra. Or maybe you were just tortured by nematodes[roundworms] and trematodes? Or will you in any way forgive them for not being allowed to be a ‘mistress of the radio station,’ a column noblewoman? So, after all it was right that you were not allowed into the kalashny row [a place where you do not belong], you must agree.»

In his articles, Mukovozchik disparagingly calls Svetlana Tikhanovskaya a «guaydikha» [a reference to the Venezuelan politician Juan Guaido], and compares the convicted Belsat journalists with enemy «scout-spotters of artillery fire,» considering the prison terms awarded them too humane:

«Note that two years in prison for such a crime is very humane. Even if these girls only learn to sew it’s already a benefit.»

Along with denigrating individuals, Mukovozchik demonizes and discredits large social and political groups – generally, all those who disagree with state policy in any area.

«All our utsekaches [refugees], protestors, zmagars [combatants] – they are all descendants of [WWII] collaborators. Spiritual heirs at least. Mankurts without a homeland, without memory, without anything sacred in their souls,» Mukovozchik writes in one of his articles.

Or another phrase from a different publication: «After all, the white-red-white, and this has already been said, is more dangerous than the coronavirus. Therefore, if a person is indeed sick you need to call the doctors.» Mukovozchik here correctly expressed the authorities’ priorities, because the danger of the coronavirus epidemic was very much downplayed and more efforts was made to combat white-red-white color combinations not only on flags, but also on factory pipes, pants, or even jelly candies.

Hate speech, especially in the form of explicit or implicit calls for violence, is dangerous. Its systematic application can increase tensions in society and enmity among groups with different political views. Hate speech is carried on Russian national television stations, however it is almost exclusively in the form of statements by invited guests. Its use in original programs on leading television channels and other state-owned media as an element of hostilely engaging with opponents of the authorities is something of an «independent» Belarusian phenomenon.

A pretend victory and a pretend democracy

The Russian-Ukrainian war has not forced the Kremlin to abandon...

The war is being discussed in every home, at every...

Current Belarus and Soviet takeover of the Baltic states in 1940: Similarities and differences

The annihilation of Belarus’s sovereignty bears a resemblance to the...