Until the spring-summer of 2020, the content of the Instagram social network in Belarus was much less politically colored than the posts of Facebook, Vkonakte or Odnoklassniki users. However, the intense presidential campaign of 2020, and especially its direct consequences, significantly influenced a change in content in the Belarusian Instagram segment. Along with a growing interest in politics and the continuing political activity in the country, posts in the accounts of Belarusians have also changed.

Quite unexpectedly, in the summer of 2020, Instagram turned into another digital platform for both Belarusian civic activism and the channeling of propaganda for the Lukashenko regime.

Just five years ago, Instagram was not even included in the top five most used social networks in the country. But since the beginning of 2019, the service has consistently held the second most popular position in this segment (second only to Vkontakte and excluding YouTube as a social network). At the same time, from August 2019 to November 2020, the number of Instagram users in Belarus increased from 29 to 44% (according to research conducted in November 2020 by #DB3 for IAB Belarus – «Use of social networks and instant messengers in Belarus»). 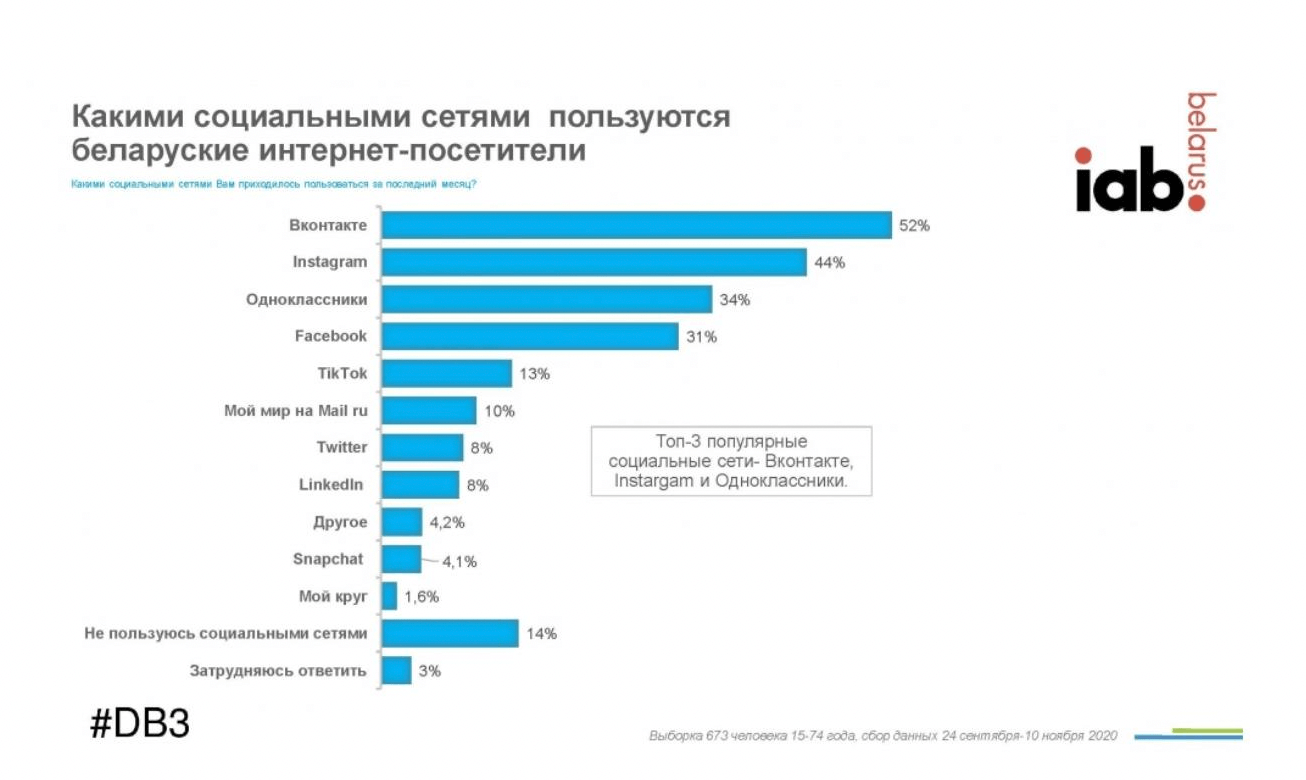 At the very beginning of the 2020 election campaign, Instagram became a popular mobilization tool for leaders of the movement for democratic change. The most successful political Instagram campaign in the electoral race was conducted by the team of Viktor Babariko. Since mid-May 2020, the account of the reputable banker (and an aspiring politician who, shortly before the launch of his political profile on Instagram, announced his desire to run for president), began to rapidly collect followers. The @viktar_babaryka account quickly reached the 100,000 mark, and in January 2021 it is close to surpassing 300,000. True, Viktor Babariko himself is still in jail, but he retains his political ambitions despite his detention.

If supporters of changes have been actively working with the audience on Instagram for a long time, then the vertical of propagandists, accustomed to forced subscriptions and the state plan, came to their senses only when the elections were already over. That is, precisely when Belarusian society was shocked by the shooting of peaceful protesters and publications regarding the torture of protesters in isolation wards and prisons.

Lukashenko’s followers began to systematically promote anonymous propaganda accounts on Instagram only after the August 2020 events (which suggests admittedly humiliating results for Lukashenko’s small group of supporters). The only exceptions in this case were the accounts of state television channels. They appeared much earlier than the elections, but until August 2020 they did not systematically publish materials consistently that would have been sharply politically colored.

As in the case of activity in the «physical world» – car rallies, marking residential areas with green and red flags, and forced participation in rallies (so-called «yabatingi») – Lukashenko’s followers in social networks were forced to react, taking their first steps after the elections. The actions of state propagandists and Lukashenko’s supporters on social networks, as a rule, were an attempt to bridge the gap. It turned out to be impossible to form an “illusion of the majority” where there was none.

In December-January 2020, the iSANS monitoring group conducted a study of propaganda accounts with more than 500 subscribers on Instagram. Accounts with fewer followers were not considered due to their insignificant influence on social processes in Belarus. However, this does not mean that small propaganda accounts with few subscribers are not unsafe through their spreading of misinformation, hate speech, bullying or in trying to create an «illusion of the majority» in an imitation of massive support for Alexander Lukashenko.

«Collective propaganda» and «supporters of the regime»

As part of the study, our team identified 45 of the largest propaganda channels, the content of which is entirely (or in the vast majority of cases) devoted to supporting the dictatorship or promoting the ideas of Lukashism (Lukashenko-ism) using a popular set of relevant political hashtags and narratives.

All these accounts can be roughly divided into two broad categories: “collective propaganda” and “supporters of the regime.” In the category of “collective propaganda” we classified 25 profiles, which, as a rule, first began posting publications after August 14, 2020, were registered in the form of business accounts (and not private profiles), do not position themselves as accounts for specific people, and on behalf of which posts are made (or are anonymous).

Often, the creators of such channels are employees of the ideological «vertical» – activists of the Belarusian Republican Youth Union and other associations created to administratively support the dictatorship. Another notable category of dictatorship promoters on Instagram is that of “professional” mothers and “professional” wives. It is curious that to increase number of views and virality of posts, the creators of pro-Lukashist accounts often use the hashtags of their ideological rivals: #BChB (#бчб), #zhivebelarus (#жывебеларусь), #tikhanovskaya (#тихановская), #freedombelarus, #tihanovskaya, #yagulyayu (#ягуляю), and #radiosvoboda.

At the same time, pro-democratic activists took an active position and systematically «sawed off» the accounts of propagandists from Instagram (in some cases new profiles were successfully blocked, which they created instead of the deleted ones). Some of the large accounts of the propagandists were blocked by Instagram administrators because the owners of these accounts violated the terms of use of service. Up to ten large accounts were deleted in the short time our monitoring group was conducting research.

A similar fate befell the accounts of both representatives of the «collective propaganda» category and the owners of private accounts of «supporters of the regime». During this time, the profile of the state television channel ONT (which called the blocking of their account «an ordered attack from the destructive opposition»), the page of the court minstrel Alexander Solodukha, the account of the freak duo of the Gruzdev sisters, and accounts of other lesser-known supporters of the dictatorship were deleted.

We also noticed that the first posts on the pages from the «collective propaganda» category promoting the interests of Alexander Lukashenko appeared just 5 days after the start of mass peaceful protests in August last year. Moreover, the content of these posts often overlapped or were duplicated, which suggests a possible unified coordination in the creation and management of these groups. Duplication of materials occurs both due to the repost of downloads from one account to another and on account of the use of the same materials. Signatures under such publications are either the author’s or are completely absent.

The predominant portion of the content of the largest propaganda Instagram accounts, which were studied during the monitoring process, is made up of short and longer videos. In most cases, these materials are not copyrighted (or the account owners most likely do not own the copyright for these videos).

Among the most popular sources of content for these accounts are the official Telegram channel of the press secretary of the Ministry of Internal Affairs of Belarus Olga Chemodanova, the Telegram channel «Pool Pervogo», the news Telegram channel @ZhivetZheBelarus, the Belarusian television stations ONT, Belarus 1, CTB, the Russian station Russia-1, and the news agency Sputnik (MIA Rossiya Segodnya), as well as news agencies Belta and News Front (the latter of which is part of the Kremlin’s propaganda pool, created after the seizure of Crimea with the aim of aggressive propaganda, initially as a Russian alternative to the Crimean bureau Radio Liberty).

In addition to promoting the cult of personality of Alexander Lukashenko and popularizing the manipulative connection between the very existence of Belarus and the personality of Lukashenko, these accounts disseminate false or distorted news, bits from videos of Russian and Belarusian state television channels (for example, from the programs of Vladimir Solovyov), pseudo-exposure of protesters with a light (and sometimes not) touch of conspiracy theories, and other similar materials.

The five most popular hashtags in this category are #Belarus (#Беларусь – 350+ mentions), #yamybatka (#ямыбатька – 330+), #Minsk (#Минск – 320+), #forBelarus (#заБеларусь – 260+), and #Lukashenko (#Лукашенко – 220+). That is, two of the five most popular hashtags of state propagandists are popular geographic locations, not original hashtags. A similar situation is found with private profiles – the only difference is that the hashtag #Vybory2020 (#Выборы20200) has overtaken the hashtag #Minsk in popularity and pushed it out of the top.

The resource that is in second place in the ranking of «supporters of the regime» (@alexey_talai, 21,900 subscribers – Paralympian Alexey Talai) has its main audience not in Belarus, but in Russia. More than 50% of subscribers to his account are Russians. Another active «supporter of the regime» is Styusha Time. This woman has collected many suspicious (scam) accounts and mass followers among followers of her Instagram account. These form their own audience through mass mutual subscription and do not interact with each other’s content. At the same time, the Belarusian audience among the subscribers of her account does not exceed 1000 people (no more than 18%). The situation is similar with the rest of the accounts from the top «supporters of the regime», the number of subscribers which varies between 600 and 3,000.

The small number of subscribers from Belarus significantly narrows the possibilities of influence of «yabatka influencers» on people who live in Belarus through Instagram. Instagram users from Belarus, as a rule, either are not interested in such content or watch it as entertainment (for example, posts of supporters of the dictatorship are popular in the thematic Telegram page «Elekhtarat», which collects and ridicules the work of «yabatki»).

The bulk of the political content of personal accounts with a «patriotic» (read: pro-regime) reference point is made up of posts and stories with photographs from events in support of the dictatorship or security forces. Often there are illustrations of the green and red flag, short videos for the social network TikTok, and posters of planned propaganda events.

In the accounts of «supporters of the regime», the content, as a rule, is unique and personally created. Most often, each post is accompanied by a long text description. Ideas for texts are often drawn from state television scenarios and programs. From these, apparently, come propaganda themes in the style of «will not give up our beloved», «protesters rally for money», «the green-red flag is the only real flag for Belarus,» «the white-red-white is the flag of fascists», «we must thank the security forces for the peaceful sky overhead», and other popular memes from the green-red patriots of Lukashenko.

To create videos, songs are often used: Rockerjocker’s «Sanya», Badya/svist’s «Mamabelarus», A. Solodukha’s «They won’t give up their beloved», Timur Pryakhin’s «For Belarus», and other melodies from the officially approved playlist.

As with other social networks, over the past six months supporters of the dictatorship have not been able to achieve any kind of leadership on Instagram. The @pulpervogo account (which is controlled by Lukashenko’s informal PR service, headed by his press secretary Natalia Eismont) has managed to gather only 4,400 subscribers since its first post on September 16, 2020. For comparison, during the same time, more than 145,000 people have subscribed to the @prezident.sveta account, which is maintained by Svetlana Tikhanovskaya’s team. By some mystical coincidence on Instagram, the follower ratio for these two accounts was 3 to 97%.

This article is published as part of the Prospect Foundation project “Online Media Literacy for Editors and Administrators of Social Media Public Pages”, managed by iSANS and supported through grants from the International Visegrad Fund. The article is published on the partner’s site @visegradinsight. A Russian version of this article will soon be available on Reform.by.