Who Is Responsible for the Free Press

Over the summer the biggest online portal in Hungary has seen its top editor sacked and most of the team leaving in protest. Signs of solidarity displayed by the European press with the colleagues from Index.hu are a bare minimum. They will not suffice to ward off domestic or foreign pressure by autocrats.

The democratic public space is at risk of losing information sovereignty not merely in the Hungary of Viktor Orbán. The ongoing subordination of press to the illiberal paradigm puts the whole European project at risk.

As the COVID19 pandemic continues the worrying trends that impact media landscape in Central Europe are accelerating. The challenge to information sovereignty – which translates to the independence and pluralism of media from autocratic control – comes primarily through the sharp power pressure exerted by China or Russia.

But the current situation displays the structural economic processes that undermine plurality and resilience of the democratic ecosystem. Just like in 2008, the press is the silent victim of the economic crisis.

Today, the pandemic has infected the advertising revenues that in turn undermines the fourth estate. This creates an opportunity for the illiberal schemes to exploit the weakened sector further.

The coronavirus is a perfect excuse for autocrats to carry out their agenda. New pressure points come now in a disguise of the emergency packages. For instance limiting access to public information and at the same time introducing penalties for countering government narratives.

Autocratically minded governments introduced fake news laws that will stay put beyond emergency situations. For the free media this ‘help’ might be as useful as euthanasia – facing extreme financial hardships they desperately need a real democratic shield to continue their mission.

The illiberal takeover of media – if it were to happen – was expected to take years but now the pace has changed. Scenarios of centralised media space and hollowed out media space were outlined in a Visegrad Insight report on information sovereignty futures in Central Europe in early March, are becoming reality, urging action from different actors.

In all of the scenarios, the report underlines that changes in the advertising market, including rapid rise of revenues from digital ads but also ownership concentration and new digital trends, are already more advanced in CEE than in many other countries of the EU and are likely to be blueprints that highlight systemic challenges to democracies.

As expected, it is now being confirmed in Hungary and some new reports by independent journalists in the region.

In late July one of the biggest media portal in Hungary Index.hu has seen its core staff leaving after the editor-in-chief was not complying with reconstruction of the editorial team – a first step towards self-censorship.

More than 80 members of the editorial team followed, abandoning the sinking ship, that was once the biggest online portal in the country and one of the very few left on market that would not be subordinated to government proxies. 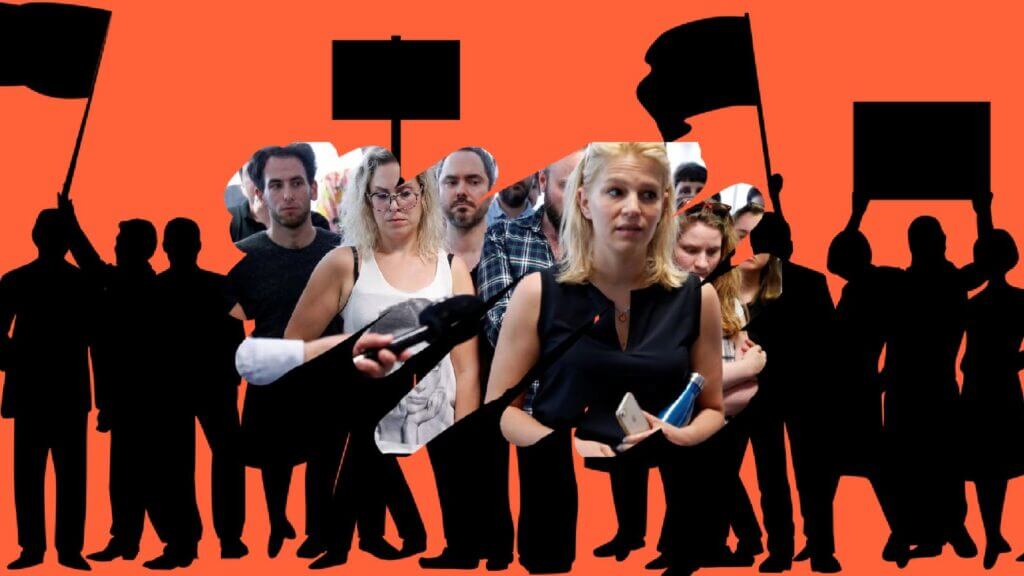 Picture of Index.hu team standing up against violation of their journalistic integrity

A peculiar ownership structure of this media outlet allowed earlier this March to dictate its editorial course by economic means. Although Index.hu ownership remains in the hands of an independent foundation its incomes were not anymore.

The purchase of the shares of Indamedia Network, a company that provided advertising revenues to the Index.hu, by Miklós Vaszily, a private businessman who is in fact the long arm of Viktor Orbán, allowed to exert direct influence on the portal’s employment policy.

Mr Vaszily’s takeover of once popular and critical media outlet Origo in 2014 led to corruption of its editorial integrity and subordinating it to the political interests of the government.

The editorial team of Index.hu was raising the alarm bell when first signs of pressure came just a couple of weeks ahead of the denouement. But in reality this process was anticipated earlier and economic impact of COVID-19 merely rushed it.

The collapse of the advertising market is a potential trigger for a systemic change much deeper than on the level of national outlets. Autocrats favour centralised systems and take every opportunity for an overhaul in the media sector. Crisis conditions expose independent business models to predatory instincts of those who operate with lesser economic risk under the government umbrella.

This process undermines democracy, which thrives only with subsidised models of ownership and decentralised governance. That is why the condition of the local media sector, currently under a severe stress test, is so critical.

After the presidential election Poland, like Hungary before, may see government taking over the local and regional media market. This would try to seal off the PiS constituency from a pluralistic media space.

The collapse of the advertising market in Central and Eastern Europe has been especially severe and disrupted distribution in the paper media sector put many outlets on the verge of collapse as documented in a recent report A lockdown for independent media?.

Furthermore, several other countries in Central Europe governed by illiberal minded politicians already take first steps to curb operations of independent media – like in the case of Poland and Slovenia.

At the same time, those governments not only learn from each other but initiate mutual friendly business operations, for instance when Hungarian government proxies help take over and establish several illiberal outlets in Slovenia.

It is no surprise that the recent European University Institute CMPF report on media pluralism in Europe highlights risks to most of Central European countries along with Turkey in all four benchmark criteria: basic protection, market plurality, political independence and social inclusiveness.

Moreover, the report indicates that in the two years prior to the pandemic the situation was continuously deteriorating much due to the disruptive consequences of digital giants’ operations.

A positive example of hi-tech knowledge and capital investment

Here the tech giants bear part of the responsibility and need to choose sides in a future struggle for information sovereignty in the region. Slovak DennikN online daily brings a positive example of how hi-tech knowledge and capital investment can jump start new media outlets.

The editorial experience is matched with resources from ESET, a successful global antivirus company from the region. Together, they have proven to be a resilient and growth-focused media business model reaching new subscription revenues records under the pandemic and levelling up on internet traffic with the most popular sites in Slovakia just four years after the launch.

With the level of investment in the region coming from US-based companies such as Microsoft, Google, Amazon or Facebook, they need to demonstrate commitment to building up free and pluralistic media space.

While investing and operating in countries ruled by illiberally-minded politicians their special dedication to information space should be backed up by concrete steps to reinforce democratic media space – currently exposed to high risks.

The ESET example shows that even a small capital and tech investment may result in fantastic results unmatched on a global scale.

American companies bear also special task for upholding American values which enabled their growth in the first place. It is especially valid when the US government is undermined by a divisive president.

Donald Trump nominee at the Agency for Global Media recently had recalled the leadership of Radio Free Europe/Radio Liberty and other media across the world safeguarding information plurality, inducing fears that he wants to use them in channelling his own agenda instead of the American creed.

The leadership of tech giants should equally recognise threats to the environment where they locate their multi-billion investments and consider it a bare minimum to develop and test viable new tech-business models that can be replicated elsewhere.

Finally, it should be recognised that the old rivalry with the eastern style autocracies remains not only relevant but has been shifting to a higher gear by a post-modern culture of doubt and ‘questioning’ in volumes that prevent the verification of facts and allow for the build-up of conspiracy theories.

Most of the Kremlin-sponsored media are developed based on that principle. Once more this was exposed during the COVID019 pandemic. In order to mitigate this influence EU institutions and governments have a special task ahead of providing better and more ubiquitous media literacy training.

Facing a multitude of largely irrelevant information in the media and social media, an Ockham’s razor principle should be considered as a supplementary anti-disinformation training for journalist and students of media literacy programs.

The principle, if not applied dogmatically, helps in the critical evaluation of fact-based, probable, faked and less probable theories and is considered as a viable heuristic model.

The deafening silence in the media cannot remain unnoticed. Social media buzz and new digital start-ups have too great gap to fill in order to save media and democracy on their own.

A response needs to come with policy and subsidy intervention from EU, to save also what is left from the local media market and prevent hostile takeovers that would hollow out the public sphere based solely on the economic rationale.

***
This article is also available on Visegrad Insight.
***

This article is published as part of the Prospect Foundation project “Online Media Literacy for Editors and Administrators of Social Media Public Pages”, managed by iSANS and supported through grants from the International Visegrad Fund.