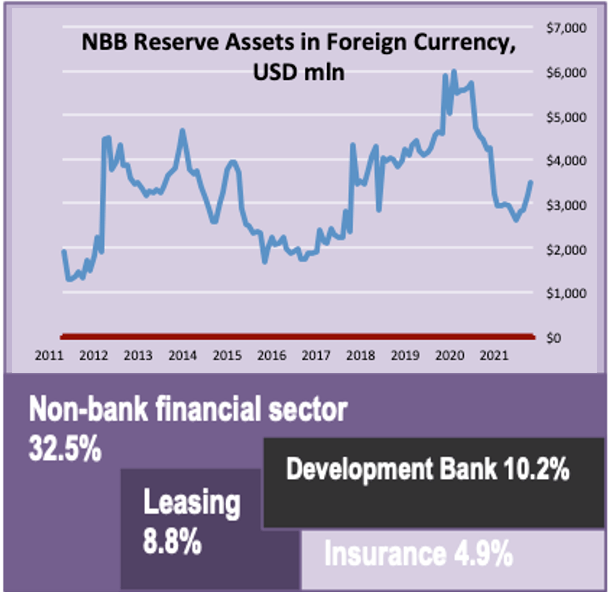 Key challenges for the economy

However, the comparatively good results of the Belarusian economy do not seem to be convincing enough in terms of sustainability, while its full recovery is still ahead. The officially forecasted nominal 2021 GDP in US Dollars is expected to be 5% below the 2019 GDP. The political crisis in the country after the presidential elections in August 2020 put a serious threat for the economic prospects due to the most recent EU, US, UK, and Canada economic sanctions, massive migration of employees and businesses, as well as general downturn in business activity as a result of politically motivated business check-overs and closures. Economic sanctions among others include ban on export for key state-owned companies and ban on capital support to Belarusian state-owned banks from Western financial institutions.

The political crisis and sanctions amplify two structural weaknesses of the Belarusian economy that seem to be crucial for a fast recovery in post-COVID world:

The above challenges indicate that significant financial resources will be needed for the recovery coming from the financial system of Belarus. The main challenge for the financial sector in the country thus will be to ensure increase in lending and general stability of financial institutions despite potential effects of the Western sanctions ever-coming as decreased flows from export and limited capital support from the Western banks. To ensure the stability of banks and financial stability in general, the quality of the prudential policy of the National Bank and its independence in decision-making will play a key role. The Belarusian banking sector will have to channel most of the funds for the economic recovery. Non-banking financial institutions, primarily the Development Bank and leasing companies, will be important financial players in providing investments, including for small and medium-sized businesses and entrepreneurship.

The National Bank of Belarus

Ensuring the macrofinancial stability in Belarus seems to be the key goal for the National Bank of Belarus in coming months. Keeping monetary policy countercyclical is a challenge in an authoritarian country, like Belarus, where a central bank is only formally independent. Chasing stability in case of Belarus will require from the NBB combination of both traditional monetary policy tools and special considerations: 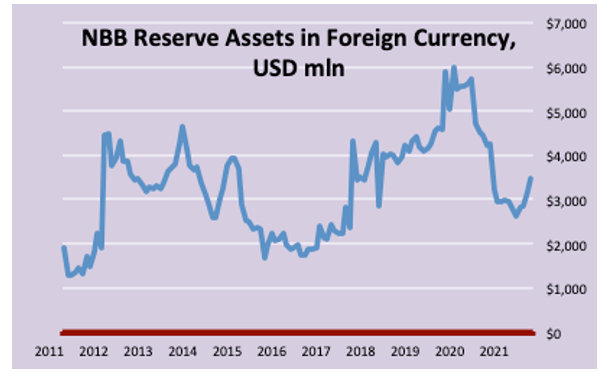 Banks remain the key channel of borrowing in the Belarusian economy, both for the private sector and the state-owned enterprises (SOEs) that are equal in size and each making around half of Belarus’ GDP. However, the financial condition of SOEs is the key threat to the financial stability of the banking system in Belarus, and this has not changed since the previous crisis in 2015. The deterioration of financial condition of companies controlled by the state directly influences the level of non-performing assets (NPA) in the banking system. Although in the banking system as a whole NPA indicator is below the critical level of 10%, the share of non-performing assets issued to enterprises in foreign currency among state-owned banks is above banking system’s average. Due to an impact coming from ever-increasing volume of the EU, US, UK, and Canada sanctions targeting large state-owned companies in Belarus[1], the risk of deterioration of banking assets remains high.

Vulnerability of Belarus banks’ funds is another issue for the country’s banking system. Deposits show negative dynamics in 2021. For the first half of 2021, total deposits decreased by 3.8%, while the value of individual foreign currency deposits slumped by 13.4%. The share of foreign currency deposits in the banking system exceeds 50%, with a significant part of these deposits held by individuals, who are more susceptible to panic during the crisis. In this regard, de-dollarasation comes out to be an important direction for the general stability in banking sector in the nearest future.

As sanctions will be evolving their impact in coming months, safe level of liquidity of banks in Belarus will be correlated not only with the prudential policy of the National Bank of Belarus, but also with access of banks to new capital on the open market as well as financial guarantees of the government for anti-crisis credit programs implemented via state-owned banks.

Non-bank financial institutions will play an important role in the economic recovery in Belarus, primarily due to the greater flexibility of their instruments, as well as due to the widespread availability of products for small and medium-sized businesses, micro-organizations, entrepreneurs and individuals. 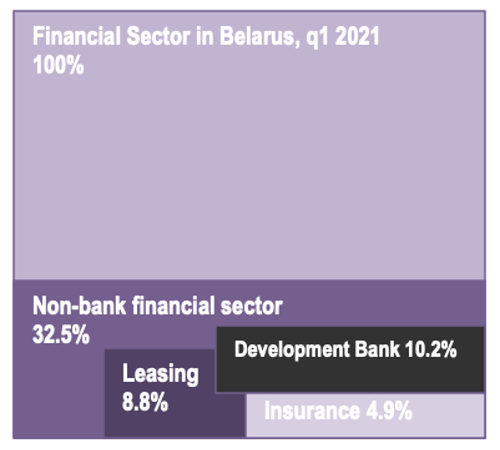 In Belarus, a market for so-called quasi-bank financing instruments or shadow banking doesn’t exist, therefore, among the available non-bank financial intermediaries, the Development Bank of Belarus (DBB) and leasing companies will become the most demanded for investments. The DBB volume of penetration into the economy is directly related to the volume of anti-crisis governmental programs. The amount of DBB bonds in remaining months of 2021 has been tripled in June 2021, which indicates the high level of desperation of the government to maintain economic growth, but with little details on where this money will be spent and their impact on the general financial stability.

The level of penetration of leasing into the economy (the volume of financing for new businesses) currently stays at a decent level of 2.4% of GDP being an important source of investments for companies and individuals. The role of microfinancial institutions in Belarus remains relatively small (the size of loans issued is 0.3% of the size of the financial sector in 2020). In post-pandemic recovery microfinance will remain an important channel for maintaining liquidity for entrepreneurships and individuals. However, the key precondition for non-bank financial operations growth is whether the general macrofinancial stability will be kept at the times of the Western sanctions later in 2021 and in 2022 if no political dialogue begins.