Responding to repression and violence: changes in the editorial policy of toxic Vkontakte public pages

The violence against peaceful citizens in Belarus in the post-election period was so egregious and widespread that it affected the teams of several toxic Vkontakte public pages and began to influence their editorial policy.

Post-election violence and a change in the agenda

The editorial policies of several toxic Vkontakte pages directed at Belarusian audiences have obviously undergone changes in connection with the latest events in Belarus. In this case, toxic pages are those in which the publication of posts containing propaganda, misinformation, and hate speech against various individuals or groups is a part of their editorial policy.

The editors of the large public page Our Country – Belarus (with more than 24K subscribers), on account of the post-election violence, called into question the legitimacy of their editorial approach. A few days after the election, the page published a lengthy post in which was written, among other things, the following:

“We are now receiving conflicting information and we do not know how to react to it. We are humbled and feel guilty for our inability to do at least something good, because we do not know how. A few days ago, we were sure that we knew. but we just learned that a few days ago our comrades who were simply returning home from work were detained. They were treated brutally and the fate of one of them is still unknown to us.” 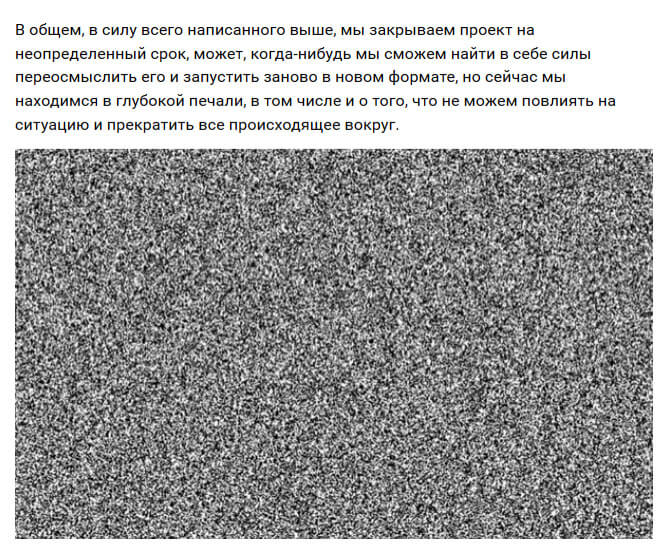 “In general, considering everything written above, we are closing our project for an indefinite period. Maybe at some point we will find the strength to reassess it and run it again in a new format, but now we are in deep sorrow, in part because we are unable to influence the situation and stop everything that is happening around us.”

In the same post, the page authors announced its closure for an indefinite period until they were able to reassess events. However, the period of uncertainty ended in mid-October and since that time the page has resumed its publication of posts discrediting Belarusian history, national symbols, Svetlana Tikhanovskaya, and the protest movement.

A more enduring ideological transformation took place with the page Opposition Movement “Our” because of the political crisis in Belarus. Before the election campaign, it took a clear pro-Russian stance, ridiculing Lukashenko’s opponents and the independent media. The page took a conciliatory stance towards the Belarusian authorities, without harsh criticism or explicit approval. 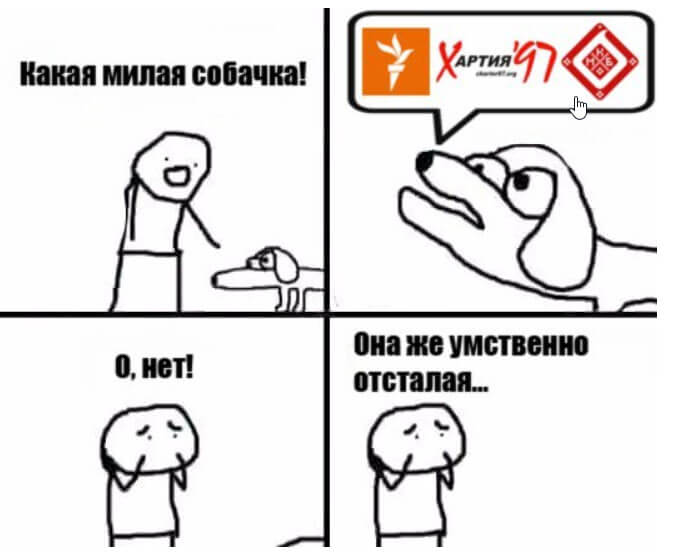 The publication style of the page following the elections and the August round of repression has changed a lot. The titles of several posts published in recent months give an idea of the page’s current position relative to the Belarusian authorities:

Prior to the active phase of the election campaign, the editorial policy of the Politring page could be described as moderately pro-Russian and neutral towards the Belarusian authorities. Since the beginning of autumn, against the backdrop of ongoing repression, the page began to publish posts with a clear critical message towards government agencies. Here are some excerpts from posts from recent months:

The page also publishes statements by leaders of the Belarusian opposition without a negative context.

The pro-Soviet page History of Belarus, which tends to idealize the times of the USSR, following the August events began to regularly publish content critical of the Belarusian authorities.

“Now the Ministry of Internal Affairs, demonstrating strength, is conducting mass arrests, putting to use its entire force, attracting all sorts of non-uniform titushky [mercenary agents] from the Organized Crime Unit, rolling out a huge column of water cannons, paddy wagons, and armored vehicles with machine guns around the city,” says one November public post.

In another post, the page harshly criticizes the actions of security forces and the Belarusian authorities, comparing the statistics of those killed and injured during the protests:

“In my opinion, it’s obvious who is who. Who is the fascist and who is the terrorist (the one who brings “fear” and “horror”). Although yes, I forgot, the only argument of Lukashenko’s supporters is the “fascist” BChB-flag (White-Red-White), because if you kill, beat, and detain people under the red-green flag, from which you have prudently removed the hammer and sickle, then you are not a fascist but a good person. In fact, it does not matter who is doing what under what flag. What is important is the actions carried out RIGHT HERE AND NOW, and not hypothetical actions that could be done as a possible option.”

However, the position supporting the white-red-white flag is compensated by the sharply galvanized toxic pages that have been dormant until recently. 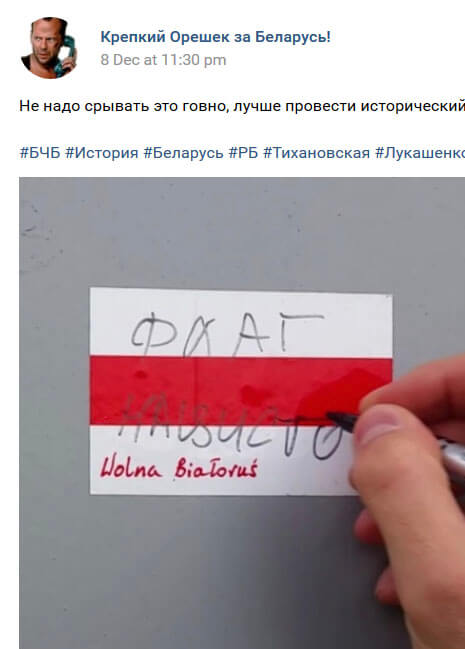 You don’t need to tear down this shit. Better to conduct a historic(al) […]
NAZI FLAG

The day after the presidential elections, the page “Likes from Bat’ka! Lukashenko Approves,” which had been inactive since August 2019, resumed its activities with the publication of regular posts containing anti-Belarusian and anti-Western propaganda and soon changed its name to Tough Guy for Belarus!

The large scale of repression, which affected very diverse segments of the population, even affected the editorial policy of some toxic pages and is likely indicative of a further drift of many pro-Russian forces from a positive or neutral position regarding Lukashenko towards a skeptical and openly negative position.