Mikhail Doroshevich, a well-known «Internet veteran» in Belarus, media analyst, marketer, and organizer of many studies on the Belarusian media audience, with the onset of the political crisis, began to publish interesting data on his Information Policy blog on how networks respond to the information agenda created by Alexander Lukashenko, on the one hand, and Svetlana Tikhanovskaya and the Coordination Council, on the other.

Alexander Morozov, a researcher at the Boris Nemtsov Academic Center for Russian Studies at Charles University (Prague) and iSANS expert, asked him a few questions.

Mikhail, there are many answers to the question of why the Belarusians, about whom people have written ironically for a long time that this is a «potato nation», suddenly turned out to be a civil nation capable of extraordinary solidarity and mobilization. How did this transition from a depoliticized state of society to this kind of awakening happen? What is your opinion on how this took place?

Great question. We were thinking about it here. There are several factors that differentiate the summer protest campaign from what we had in the past. The trigger was the spring situation with the pandemic. In terms of media consumption, the most important source of information for Belarusians is television. The second source is word of mouth. Internet and social media are the third points. Newspapers in Belarus, unlike some other countries, have degenerated radically, although they still exist due to the Soviet tradition.

For the first time we recorded that there was a change in media consumption and a sharp increase in solidarity and mobilization of the Belarusian internet audience, primarily to Onliner and tut.by, during snowstorm Javier. This was in March 2013. At that time, a huge number of people turned out to be blanketed in snow in different places – in cities, on the roads – and they began to negotiate support through forums. And the same story happened in the spring of 2020, even before the elections, when the pandemic began and the authorities ignored it. There was a tremendous surge of interest in news in April, and discussions began in city chats. The authorities let this pass. People realized that the government would not help them, the authorities were misinforming and deceiving them. The official picture was at odds with what people saw on the networks and in real life. The system is arranged in

such a way that the chief doctors were afraid to publicly tell what they lack, what problems they have, because they would find themselves “at fault.” But thanks to social media, real information was quickly exchanged: where hospitals are overcrowded, what equipment is in short supply, and so on. And already here an environment that felt independent was manifested. Volunteers appeared. And along with it the solidarity of people independent of the state.

And when, at the beginning of the start of the official presidential campaign, I traveled to several cities to see what kind of people were going to the meetings of the joint headquarters, I saw that these “tough guys” who were used to working were coming. Truckers, representatives of small business. It was clear that Tikhanovsky turned out to be an important trigger for a large segment of the population. And Tikhanovsky, as you know, was a blogger. That is, he was entirely a person from social media. And it turned out that social media among Belarusians rose to a new level of trust.

And hence the rise of NEXTA?

I have exact numbers. I conducted research in August 2019 and in October-November 2020 on what messengers and social networks are used in Belarus. In 2019, a study showed that the most popular messenger in Belarus is Viber. 70% of respondents used it and Skype and WhatsApp were in second and third place. Telegram was in fourth place and only 23% used it. What do we see in 2020? For Telegram, this figure for November 2020 is 43 percent. It became number two. Viber has grown to 74 percent. Yes, for Telegram this is almost a twofold increase. It has become an important media tool. But do not overestimate it. We still have to think about this trend.

The second important factor, which is much discussed, is the influence of Russian media. Is it exaggerated?

The influence of the Russian media is enormous because the Belarusian media system has been destroyed.

We talked about the rigidness of Belarusian television, and the same thing happens with online resources. The sites for ONT, «SB» [Sovietskaya Belarus], regional media with a form of state ownership – these are all irrelevant today. And it turns out that Russian news resources are actively read, especially by older audiences. These include RIA Novosti, RIAFAN, Ukraina.ru, Lenta.ru, Meduza, and so on. Of course, Belarusian portals are still leaders in terms of popularity – tut.by and onliner.by, which have worked and are continuing to work very effectively. But many independent media outlets that have been blocked – Naviny.by, Euroradio.fm, kyky.org, the-village.me, svaboda.org, belsat.eu, gazetaby.com, afn.by and so on – must move to other domains or change names, leading to a loss of a part of their regular audience. The authorities suppress independent media, and the audience leaves for instant information in Telegram. But you need to understand that this is a tool for delivering news – not a replacement for “traditional” online media. Of course, the large numbers for popularity of Russian media do not signify support for what they write. People can be critical of what they read. But the fact remains that the weakness of official media and the defeat of independent Belarusian media works in favor of the popularity of Telegram and Russian media.

There is also a moment of novelty here. The fact is that before the political crisis, the Belarusian media did not build an active promotion strategy on YouTube. It was here that Tikhanovsky and other “people’s bloggers” played. They racked up a lot of views. They were detained. They were steamrolled by repression. At the same time, the videos that Onliner and tut.by produced – that is, the classic independent editorial offices – saw more views than YouTubers. I would say that personal YouTube channels have not developed as much in our situation as they could have. Yes, during the crisis Maxim Katz, MINSKI “Malina” and a couple of other names were talked about. But it is difficult to name something popular other than these. It is important to note that the authorities fight the “independent picture” roughly. They take away media accreditation and as a result Belarus is poorly represented in European news. Even in the most horrible countries in the world people have the right to work with accreditation. That is why there has been a significant decrease in the number of views on the most popular Belarusian YouTube channels compared to the beginning of autumn. Because it is simply impossible for YouTube to work where the events are occurring.

And Svetlana Tikhanovskaya? She is very active and keeps her agenda. How successful is this in terms of audience numbers?

I conduct a monthly monitoring of the audience’s reaction to media occasions created by Lukashenko and Tikhanovskaya. It shows that Tikhanovskaya is successfully competing with Lukashenko. 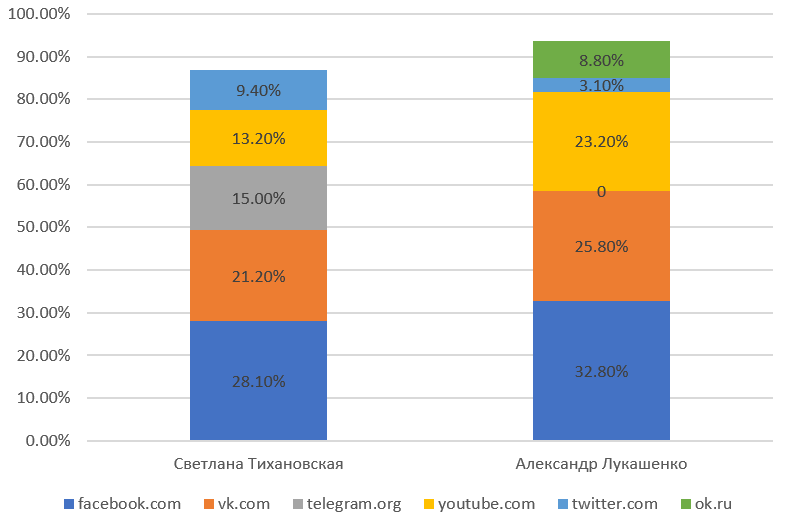 It is clear that the video of Lukashenko is being viewed, if only to make a negative comment. Moreover, these statements of Lukashenko are also watched by audiences in neighboring countries. Tikhanovskaya is very active in Telegram, but it was only in December that she started acting as a YouTube blogger. Let’s see how this channel’s audience will expand. But at the same time, as the numbers show, the 10-12 key statements she makes a month create a competing agenda for Lukashenko’s statements. And it should be noted that despite the great efforts of the Kremlin media to create a negative image of Tikhanovskaya, it has not worked.

This article is published as part of the Prospect Foundation project «Online Media Literacy for Editors and Administrators of Social Media Public Pages», managed by iSANS and supported through grants from the International Visegrad Fund. The article is published on the partner’s site @visegradinsight. A Russian version of this article will soon be available on Reform.by.