27 years ago, Belarusians made a historical mistake. They elected a man who promised a return to the USSR. Since then, we hear from him, «I will not lead my country to follow the civilized world.» He also says constantly that we do not need any reforms, we just need to keep what we have. And that what we need is stability. But after the last elections, he promised disloyal private business that he would «cut them out with a hot iron.» However, the attitude of the current government to business has always been not very friendly and suspicious.

What are the results of this policy over 27 years?

I will explain this with the example of Belarus and Poland – this very country that the USSR was talking about when they said, «a chicken is not a bird, and Poland is not abroad.» 30 years ago, Belarus and Poland were close in terms of socio-economic development. According to some indicators (including GDP, household consumption, the number of medical services provided, the human development index published by the UN), in the late 1980s the Belarusian economy was even more successful than the Polish economy. However, since the early 1990s the two countries have chosen completely opposite transformation models. The Polish economy quickly moved close to a market economy and today is considered one of the most reformed and successful post-socialist countries. The Belarusian economy, on the contrary, has always been and remains the least reformed economy in Europe (according to the European Bank for Reconstruction and Development).

First, I will start with salaries. In January 2021, the average monthly salary in Belarus (before taxes) was 1,290 BYN, or 503 USD. Remember, back in 2006 the leader then of Belarus promised 500 USD salaries by the end of the five-year plan; that is, by the end of 2010. 15 years have passed, and Belarusians are still dancing around this figure. And every time when we somehow manage to get closer to this cherished level, an economic crisis occurs, which throws our earnings back. Because the Belarusian economy with a large and uncompetitive public sector cannot maintain this level of wages. This was the case after the devaluation in 2009, the threefold collapse of the ruble in 2011, the currency crisis at the end of 2014, and the recession in 2020. At the same time, 500 USD in 2021 has a significantly lower financial capacity than in 2006.

For comparison, in Poland the average monthly salary in January 2021 was 1,484 USD – three times higher than in Belarus. Incidentally, in terms of wages, Ukraine has almost caught up with Belarus. In Ukraine, salaries in January totaled 437 USD, and in February 450 USD (while in Belarus, on the contrary, the average salary fell to 491 USD in February). This year not only Ukraine, but also Moldova will be able to overtake Belarus in terms of average salary (495 USD in the 4th quarter of 2020), and then Belarus will become the poorest country in terms of average salaries in Europe.

It would be interesting to know how long Belarusian state propaganda will ask, «Do you want it to be like in Ukraine?» and to boast about the supposedly social orientation of the Belarusian economy. The Ukrainian economy, despite the war, all the vices of the oligarchy, and other problems, has been developing in recent years, and our stagnation has been going on for ten years. During this time, Belarus has already become the country with the lowest minimum wage in Europe. 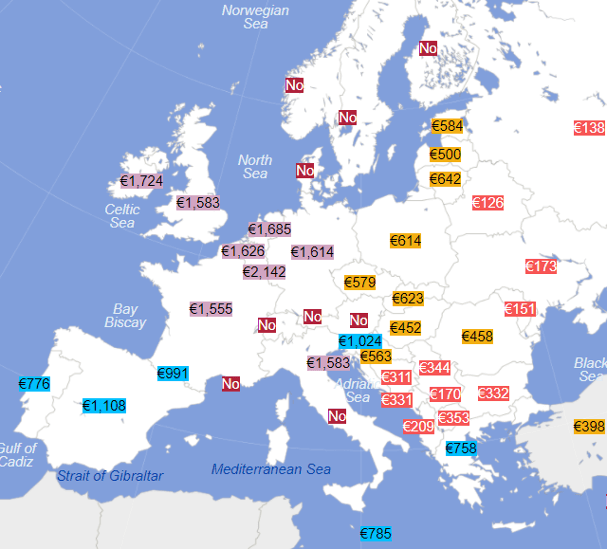 Then, maybe, at least pensioners in Belarus live well? With the latest increase in pensions in Belarus, since February 2021, the average senior pension has been 513 BYN, which is 197 USD (at the rate in February), while in Poland it has been 681 USD (in December 2020, at the December rate) – almost three and a half times more. The same is with the minimum pension. Since February 2021, a pensioner in Belarus receives at least 274 BYN (together with additional payments), which is 105 USD, and in Poland it is 323 USD. And there are not many of them – only 5% of pensioners.

You can also compare the size of student stipends, unemployment benefits, and other social benefits and income. But this will not change the general background: Belarus is very far behind Poland in income and is becoming one of the poorest countries in Europe.

Let us now look at the cost of living. Some would probably argue that in Belarus it is much lower than in Poland. But this is not true!

If this were the case, Belarusians would not go to Poland to buy clothes, shoes, washing detergent, electronics, jewelry, and many other goods.

Lack of reforms has political, economic, and social consequences

Firstly, Belarusians want to live in a democratic country. There are no democracies in the world where the economy is dominated by the state. But there are authoritarian countries where liberal economies and a large private sector remain. The best example is China. Therefore, the market economy itself is not a panacea for building democracy. But if we want to live in a free country, then it is impossible to do so without increasing the share of the private sector in the economy and without institutional reforms (such as an independent judicial system; changing the role of the state in economic development; creating equal and favorable business conditions for all enterprises, regardless of the form of ownership, size or industry; reform of the SOE sector; and improving the efficiency of the social safety net). More details about the vision of structural reforms needed by Belarus can be found in the «Open Letter of Economists to the Public of Belarus».

Secondly, the Belarusian economy has essentially stopped growing over the past ten years. The internal potential of the economy in its current state is very low, and external conditions are unfavorable for Belarus (stagnation in Russia, a tax scheme in the oil industry in Russia, and economic sanctions against the regime). In 2011-2020, the Belarusian economy grew by an average of 0.9% per year (in comparable prices) – 3-4 times slower than the world economy. For comparison, Poland’s economy grew by 3.0% annually. And forecasts for the medium term remain not in Belarus’s favor. Our country’s economic growth prospects remain the worst in the region.

Worse still is that even this meager economic growth is not sustainable.

Short periods of slow growth alternate with economic crises. Over the past ten years, Belarus has experienced three crises: a threefold depreciation of the Belarusian ruble in 2011; the currency crisis at the end of 2014 and the recession in 2015-2016; and the 2020 recession.

Third, the lack of reforms has economic and social consequences. The propaganda frightens Belarusians with reforms leading to unemployment and liquidation of state-owned enterprises. This is a lie! On the contrary, degradation awaits Belarus without economic reforms. See what is happening with our industrial giants (data for different years, since the information is not always available to the public for a longer period):

These are just a few examples of the ruining of large Belarusian state-owned enterprises under the current government, even though our factories have had the opportunity to establish good cooperation with industrial leaders from both the West and the East. But for today’s government, it is more important to keep enterprises and their teams under control than to give them the opportunity to develop.

There are, of course, positive examples, where the number of employees at some large state-owned enterprises has increased in recent years, for example, the Mozyr Oil Refinery, Grodno Azot, and Mogilevliftmash. But in general, the situation at state-owned enterprises is very depressing. According to calculations made by the IPM Research Center, over eight years from 2012 to 2020, the average number of employees in commercial enterprises with any share of the state decreased by 477,000 people (-28%) to 1.24 million. Employment in the public sector also decreased, but less – by 40 000 people (-3%) to 1.11 million. But in private enterprises the number of employees increased by 220,000. (+ 13%) to 1.95 million people. The state has long ceased to be the «employer of last resort» and is no longer able to maintain high employment in the public sector.

Without economic reforms, we will not be able to live in a free and successful country that people will be proud of and that will stop them from going abroad en masse to realize their potential there. Therefore, do not be afraid of change. Without it, we will not have a future, but there will be degradation which the «authorities» falsely call stability.