The project «New Propaganda and Disinformation Challenges for Visegrad/EaP states in the Changing Environment» has been carried out by iSANS – the International Strategic Action Network for Security in cooperation with its partners, the Institute for Public Affairs (Slovakia), European Expert Association (Ukraine), Prague Security Studies Institute (Czech Republic), and Res Publica Foundation (Poland, in cooperation with ABT Shield), and supported by the International Visegrad Fund. All organisations participating in the project have strong track record in the research of Russian propaganda and its malign influence operations in the region of Eastern and Central Europe.

The idea of the project has been to study changes in the Kremlin’s propaganda methods and disinformation narratives in Eastern and Central Europe and to fill in the gap in comparative regional studies focused on analysis of pro-Kremlin disinformation narratives and their evolution. The project has focused on three Visegrad countries – Czech Republic, Poland, and Slovakia, and two Eastern Partnership countries – Belarus and Ukraine. All of them have been targets of Kremlin’s malign operations and extensive pro-Russian propaganda influence.

When the project was at the planning stage in the summer of 2021, we spoke about a «changing environment» and discussed a likely metamorphosis in the Kremlin management system, including changes in methods of its external influence and narratives of its propaganda. We expected that «by autumn 2021 we will face a modified system of proKremlin disinformation narratives targeting CEE countries» that would pose new challenges for them. However, we could not expect that just a few months later the situation in the region would change so drastically.

With the start of the large scale Russian military invasion of Ukraine and the Lukashenka regime’s complicity in the aggression, the focus of the pro-Kremlin propaganda has changed. While its ultimate goal remains to undermine democracy as a concept, destroy the unity of European countries and NATO, to weaken sovereignty of neighboring states and to justify Russian imperial ambitions, its narratives have shifted to war propaganda, justification of the aggression against Ukraine, and disinformation about the war, including denial or silencing of massive war crimes committed by Russian troops and dissemination of «fake news» about actions of Ukrainian armed forces and allies supporting Ukraine.

More than a dozen research articles produced in the course of the project demonstrate this historical evolution of Russian and pro-Kremlin propaganda and help raising awareness of wider audiences about malign influences and security threats the countries of the region are facing. Five case studies included in this report review major Russian propaganda narratives and malign influence channels before the invasion of Ukraine and in the first months of the war. We hope that the research findings will allow suggesting more effective ways to counter Russian malign influence, including setting up counter-narratives, developing more efficient policies, and working on enhancing society’s resilience to disinformation. Sharing experiences and expertise, and cooperation at the regional level appears to be a much needed response to common security threats.

We hope that the report would be useful to policymakers, experts in information security, media professionals, civil society groups, and will ultimately contribute to the strengthening of resilience of states and societies to pro-Kremlin’s malign influences in the region of Eastern and Central Europe and beyond. 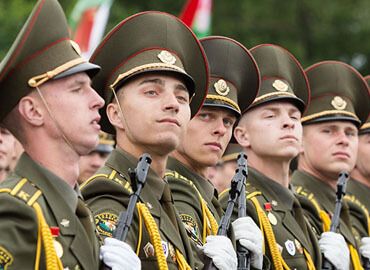 Military education in the republic of Belarus

Throughout the last decade, the Belarusian authorities have managed to...