Thank you for being with iSANS team. We appreciate your interest in Belarus Review Daily, and seek your feedback to tailor this product so that it fits your interests even better. We hope you will share 120 seconds of your precious time with us to complete THIS FEEDBACK FORM, and help us improve this service.

Same day, over 100,000 people joined the 64th protest rally in Minsk despite heavy rain. The militants of Lukashenka’s regime, often in civil clothes and with no markings, acted in extremely brutal fashion since early afternoon. According to Viasna Human Rights Center, at least 586 people were detained on Sunday (including minors and up to 50 journalists who were later charged for alleged participation in rallies although they were performing professional duties – with 14 journalists having spent a night in custody, and at least one transferred to Akrestsina detention center).

Groups loyal to illegal “president” Lukashenka used shotguns, assault carbines, tear gas, pyrotechnics (in at least one case reported in local media, an unexploded grenade used by militants was later exploded with the use of trotyl / TNT), and water cannons to disperse peaceful crowds. A few military convoys with armed with heavy machine guns were spotted within the city. Many protesters suffered severe health damage, dozens of people were transported to hospitals by ambulance from police stations after they were brutally beaten in the aftermath or in the process of illegal detention. In the evening of Sunday, groups of Lukashenka’s followers from among the Ministry of Interior drove across residential areas in Minsk and shot their guns targeting groups of peaceful protesters. It remains yet unknown, if there were any casualties or whether someone reported injuries following evening attacks.

In response to violence against the protesters, residents of Minsk blocked Minsk Beltway (MKAD) and other major roads on Sunday evening. Protest activity continues in Belarus for over two months, and seems to be growing. In the last two weeks, pensioners are becoming a new visible force to join the protests. The elderly and pensioners are becoming more active in protecting and reclaiming the victims of Lukashenka’s militants in the streets.

On Saturday, self-declared “president” Lukashenka arrived to KGB internal pre-trial jail and met with a group of political prisoners and an unknown man who was present in the meeting (presumably – to stage the role of Siarhei Tsikhanouski who did not appear in any videos from the room). State propaganda claimed Lukashenka initiated “a dialogue on constitutional reform”. However, there is no unbiased evidence of what really has been discussed, moreover – on what is the position of political prisoners.

De-facto, it was a meeting of hostages with the person responsible for their illegal detention, and no talks of such kind can be recognized as a “roundtable” or negotiations. There can be no dialogue with Lukashenka because he is unable to keep his political promises, and any results of this propagandistic meeting (as well as all claims on constitutional reform) are null and void as long as former president of Belarus remains the initiator of any changes – that anyways are of purely imitational nature. Lukashenka does not plan to abandon his position of illegal and illegitimate ruler even after the so-called “reform”, which means no functional changes to the totalitarian architecture of his tyranny whatsoever.

Two inmates who were present during Lukashenka’s meeting with the political prisoners, were released on Sunday. Yuri Vaskresenski and Dzmitry Rabtsevich were used by the state propaganda to call for the end of protests and join conversation on “reform of constitution” – however, with no results. It is clear that Lukashenka’s regime is now aiming to use a strategy of “imitational dialogue”. However, it has to be clear to all policymakers outside Belarus that there can be no legit dialogue on transit until Lukashenka leaves the country or ends up in jail. New targeted sanctions, growing economic pressure with blockade of businesses related to PEPs connected to Lukashenka and supporting him, as well as non-recognition of legitimacy and legality of Lukashenka himself shall be the foundations of all contacts with the acting authorities – until all political prisoners are released, the organizers and executors of repressions face justice, and new fair elections take place.

Joerg Forbrig, the director for Central and Eastern Europe at the German Marshall Fund of the United States, shares his vision of what Lukashenka’s visit to KGB’s internal prison means.

On October 10, Sviatlana Tsikhanouskaya was allowed to speak to her husband, blogger Siarhei Tsikhanouski for the first time in 134 days. Siarhei remains in jail on fabricated grounds since late May. He is acknowledged as a political prisoner by the domestic and international human rights groups.

“Belarusian cyber partizans” hacked the website (narb.by) of the National Archive and posted the names of 97 political prisoners there.

Belarusian culture workers created a Solidarity Fund for the artists who fell victims of repressions. Earlier, over 1200 artists joined an open letter demanding the end of repressions.

In Babruisk, police forces will search the housing of 30 people who were noted in peaceful rally, claims a local journalist. Many of them are journalists who are being harassed following alleged arson of police infrastructure in Babruisk that is now being “investigated”.

Acting ministry of justice of Belarus plans to nullify the license of Viktar Babryka’s lawyer Aliaksandr Pylchenka on August 15. Viktar Babaryka considers this an effort to deprive him of a basic right to legal protection. ANother lawyer of Babryka, Maxim Znak, was detained in September. Viktar Babaryka is kept in KGB pre-trial detention center since June 18.

The prosecutor of Minsk, Aleh Laurukhin, announced tightening punishments for participation in “illegal mass gatherings”. According to him, these measures will minimize the number of participants of “illegal rallies”. He added there are now around 250 criminal cases against the protesters in Minsk only. 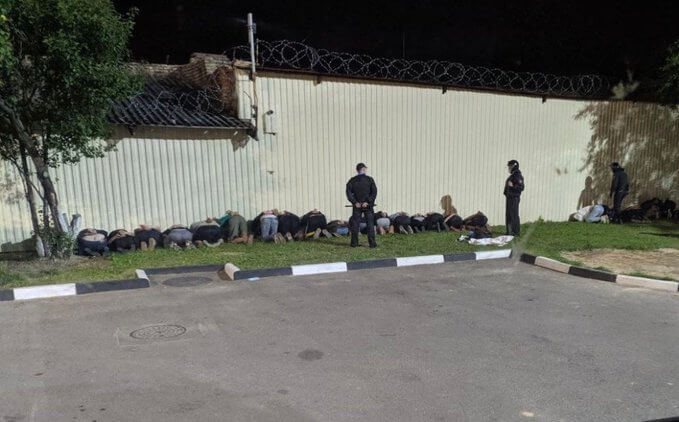 EU High Representative/Vice-President Josep Borrell made a phone call to acting minister of foreign affairs of Belarus Uladzimir Makei and reiterated the EU’s position that the acting Belarusian authorities must “end violence and repression against citizens, release all detainees and political prisoners, respect media freedom and civil society”, and urged the Belarusian authorities to start an inclusive national dialogue”.

As of Sunday, only two ambassadors of EU member states remain in Belarus. Austria and Italy remain the last EU countries to not recall their envoys after acting MFA of Belarus forced Poland and Lithuania to recall most of their diplomats. Britain also recalled its ambassador in solidarity with EU partners.

This week, president-elect of Belarus, Sviatlana Tsikhanouskaya, will meet the foreign minister of Canada François-Philippe Champagne. Two weeks ago, Tsikhanouskaya and minister Champagne already discussed the situation in Belarus during a phone call.  Canada was among the first countries to introduce sanctions against Lukashenka’s regime. 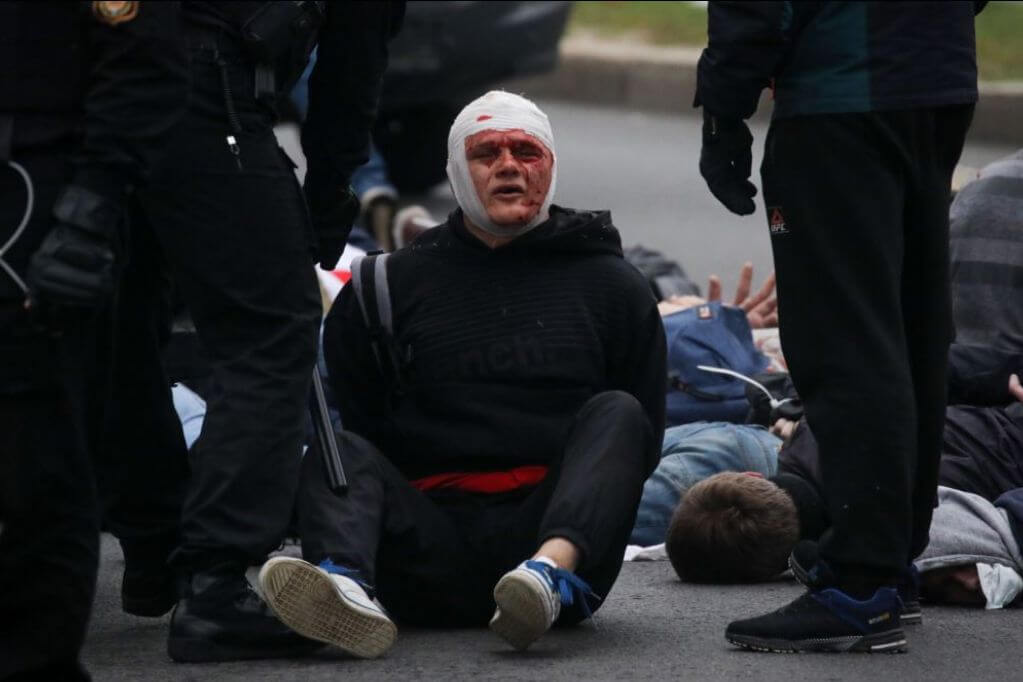 Newly-discovered video shows the use of torture by the guards of Akrestsina detention center in Minsk in post-elections campaign of state-orchestrated atrocities. Over 1,000 participants of protests reported the use of torture by Belarusian law enforcement (primarily — the employees of the Ministry of Internal affairs and, especially workers of Akrestsina detention center). The video shows a corridor of prison workers beating freshly-delivered group of protesters. Such “torture corridors” were reported by dozens of protesters following the events of August 9-13. See video (18+, shocking footage, viewer discretion is advised).

Leader of MTZ strike committee was forced to quit his job after he was blackmailed by state company’s administration and was made subject to a few arrests since August. He is the only member of the presidium of the Coordination Council to remain in the territory of Belarus at large.

UN employee Anora Lanhar was detained in her father’s summer house on October 10, 2020. It is the first detention of UN employee in a campaign of post-election repressions.

Brother of the Hero of Belarus and famous biathlete Darya Domracheva was detained following protest rally in Minsk on October 12. Domracheva remain silent about the political situation in Belarus for a long time. She was earlier subscribed as Belarus KGB officer during her sporting career.

The former head of United Civil Party (OGP), Anatol Liabedzka, started a hunger strike on October 10. Anatol disappeared on October 8. The was later discovered in jail and was sentenced to 15 days of incarceration for alleged participation in “illegal gathering”.

On October 9, journalist Aliaksandr Velitchanka was sentenced to 10 days of arrest for performing his professional duties. The witness present in the hearing via Skype, an unknown law enforcement employer, weared a balaclava and used a fake name, Aleksandrovich Aleksandr Aleksandrovich. He claimed the journalist was participating in an illegal mass event. Judge Viktoriya Shabunia, who is known for long-lasting participation in politically-motivated repressions found the journalist guilty based on fake accusations of an anonymous witness.

In Homiel, journalist Dzianis Yakshtas was sentenced to 15 days in jail in similar case on October 5. His wife, Hanna, was detained on October 9.

Journalist Larys Shchyrakova was detained on October 9 in Homiel.

On October 10, Uladzimir Kavalkin was detained in Minsk. He is the founder of petitions.by and «Кошт урада» (“price of government”). the first project help create public petitions online, the second studies and explains how state budget is being formed and spent in Belarus.

On October 9, journalist Yauhenia Dolhaya was detained in front of her 8 y.o. daughter near their house. No charges or additional information were provided to Yauhenia’s family. As of Monday morning, the journalist remains in jail. The police denied she was kept in jail, although witnesses confirmed she was delivered to Partisanski RUVD (police station) in Minsk.