Thank you for being with iSANS team. We appreciate your interest in Belarus Review Daily, and seek your feedback to tailor this product so that it fits your interests even better. We hope you will share 120 seconds of your precious time with us to complete THIS FEEDBACK FORM, and help us improve this service.

Free Russia Foundation supported a publication of report “Political Crisis in Belarus” prepared by iSANS expert Alexandr Morozov. This encompassing publication outlines the positions of main actors in current political crisis, provides an overview of current discussion among the international community, and offers possible measures to overcome the crisis.

Šimon Pinkas, a Project Assistant at Prague Security Studies Institute, presents his findings on Czech response to COVID-19 Infodemics. This article is also available on Visegrad Insight and was published as part of the Prospect Foundation project “Online Media Literacy for Editors and Administrators of Social Media Public Pages”, managed by iSANS and supported through grants from the International Visegrad Fund.

Grigorij Mesežnikov, a political scientist and the President of the Institute for Public Affairs (IVO) in Slovakia / iSANS expert, compares how the European Union and Russia behave towards Belarus in «geopolitical» context of crisis in Belarus.

Andrei Yeliseyeu (Research Director of the EAST Center / iSANS expert) explains how the misogyny of propaganda is used against Sviatlana Tsikhanouskaya by Belarusian and Russian TV channels. In his previous publication, Mr. Yeliseyeu exposed how Belarusian state media changed the direction of their propaganda after they were synchronized with Russian propagandistic news outlets. 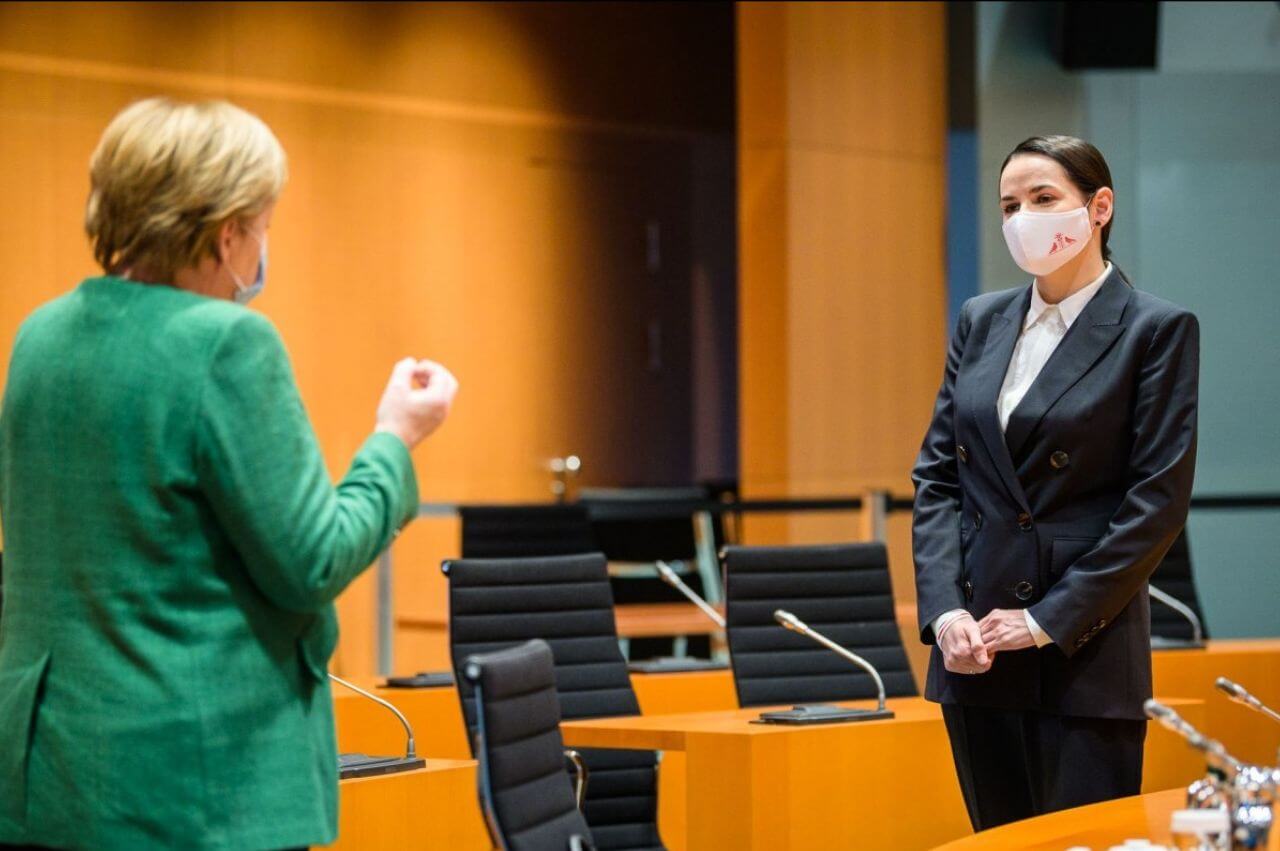 Daily protests continue for more than two months now. Over 300 people were detained during rallies in several cities last Sunday. Nearly 120,000 took part in a protest rally last Sunday in Minsk. Water cannons were used in Minsk to disperse the crowds. The protesters partially disassembled and broke down one of the water cannons after it was surrounded by dozens of protesters. On Monday, a large group of retired people marched through central Minsk causing applauses and cheering – the pensioners as a separate group protested against Lukashenka for the first time since his rule.

President-elect Sviatlana Tsikhanouskaya continues her European rally. She had a meeting with German Chancellor Merkel on Tuesday. The meeting lasted for around 45 minutes. Two national leaders discussed the situation with political prisoners in Belarus as well as need for German humanitarian support in rehabilitation of victims of police brutality and torture, support for Belarusian students and journalists. Tsikhanouskaya asked Merkel to lead mediation of dialogue between the Coordination Council and representatives of Lukashenka’s regime.

Tsikhanouskaya also said she expects Vladimir Putin to join mediation process. It is likely that this point was a part of Merkel’s position. However, Putin remains reluctant to all invitation for dialogue with Tsikhanouskaya and the Coordination Council. Soon after Tsikhanouskaya said she expects Putin to join the mediation group on Belarus crisis, she was announced «wanted under criminal charges» by Russia’s Ministry of Interior. Later on, the Minsitry explained that Tsikhanouskaya was added to Russia’s «wanted list» through a mechanism of the Commonwealth of Independent States (CIS). On Thursday, acting ministry of interior of Belarus confirmed they started a criminal case against the president-elect for «public calls for the seizure of state power or the commission of actions». So far, the only party to the conflict to violently seize power is Aliaksandr Lukashenka and a near circle of top executives representing his regime.

After negotiations with Merkel, Sviatlana Tsikhanouskaya had a meeting with Germany’s Vice-Chancellor / Minister of Finance Olaf Scholz.

So far, Tsikhanouskaya is the most successful and widely recognized opponent of Lukashenka in the 26 years of his career. As a rule, she is being welcomed within presidential diplomatic protocol standards. Also, she is notably growing very fast as a professional politician in the last two months. 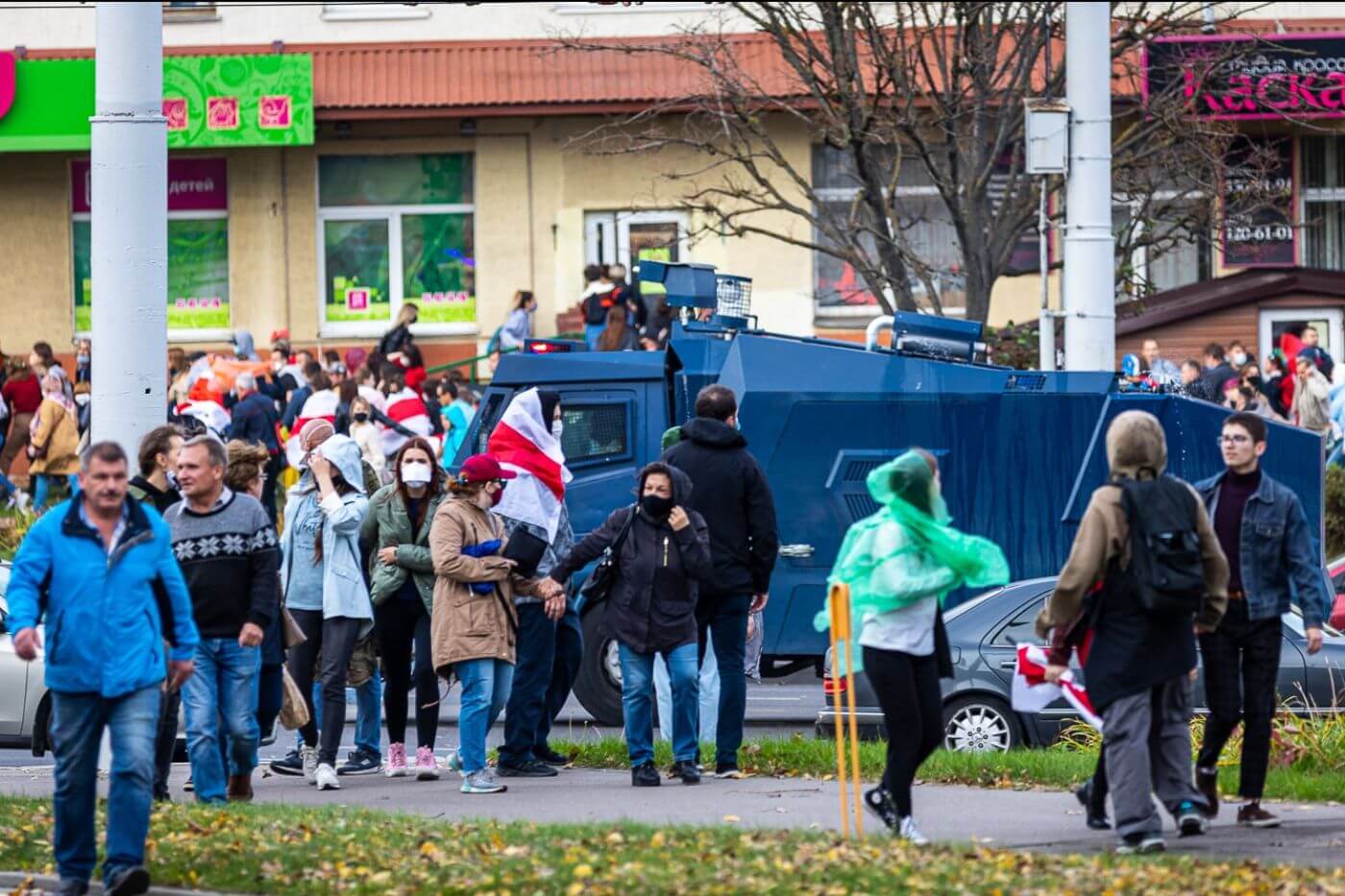 On Wednesday, members of the Coordination Council, Pavel Latushka and Volha Kavalkova, discussed preparations of the Congress of Belarusians Abroad with representatives of Belarusian diaspora in the USA, France, Germany, Israel, Australia, Norway, Netherlands and other countries.

On October 7th, Sviatlana Tsikhanouskaya made an address to the National Assembly of France.

The employees of Navapolatsk-based «Naftan» oil refinery recorded a video appeal against police brutality and in support of fair elections.

On Wednesday, a ship tanker with Azerbaijani oil for Belarusian refineries has begun the transshipment of oil in port of Odessa (Ukraine). The oil will be delivered to a refinery in Mazyr via Odessa-Brody oil pipeline. The tanker with 95000 tons of oil arrived to Odessa from the Turkish port of Ceyhan in September. Azerbaijan may supply up to 1 million tons of oil to Belarus until 2021.

Belarusian state propaganda is now using titles «Former Soviet Republic of Lithuania», «Former USSR», and «Former Polish People’s Republic» to identify Lithuania, Ukraine and Poland in their stories after these countries refused to acknowledge Lukashenka as legal head of state.

United States Assistant Secretary for Democracy, Human Rights, and Labor Robert A. Destro condemned the acting Belarusian authorities’ policy of stripping parents of custody of their children if the children are brought to peaceful protests. Lukashenka’s regime plans to introduce liability for bringing minors to peaceful protests or any mass gathering that is not sanctioned by the acting regime.

Foreign ministers of EU countries will discuss situation in Belarus on October 12. Reportedly, they will discuss, inter alia, the future of acting Belarusian diplomas in European countries.

Poland and Sweden agreed to work more closely on Belarus-related issues within OSCE since each country will preside in the organization within 2021-2022.

United States Treasury Secretary Steven Mnuchin stated it is crucial that Belarus and other countries covered by the European Bank for Reconstruction and Development (EBRD) remain committed to open market, multiparty democracy and pluralism «to avoid backsliding».

25 members of the European Parliament called up on Belarusian military executives to follow the oath to defend the people of Belarus instead of following «the illegal orders of a power usurper, citizen Lukashenka». Acting executives of Belarus ministry of defense responded that they will remain on Lukashenka’s side.

Latvia, Estonia, the Czech Republic, Bulgaria and Germany are recalling their envoys in solidarity with Lithuania and Poland. Last Friday, acting foreign ministry of Belarus announced a recall of its ambassadors to Lithuania and Poland for consultations and invited these two countries to do the same. Although the acting MFA of Belarus initially suggested Poland and Lithuania recall their diplomats, on Saturday the acting press officer of Belarusian MFA announced these recommendations are «obligatory». The ambassadors of Poland and Lithuania in Minsk were also recalled, although initially both countries were not going to do so. NATO Secretary General Jens Stoltenberg called up on Lukashenka’s regime to review this decision.

Lithuania has blocked millions of euros of a European Union-funded cross-border cooperation programme with Belarus, fearing the money could be misused.

The International Olympic Committee will investigate claims from Belarusian athletes who face reprisals for expressing their anti-Lukashenka political views during peaceful protests. So far, 680 national top athletes openly expressed their disagreement with current political situation in Belarus and joined the Free Association of Athletes (SOS BY) movement. The claims followed the arrest of Alena Leuchanka, the leader of SOS BY, who is now incarcerated for 15 days for participating in peaceful march against police violence. 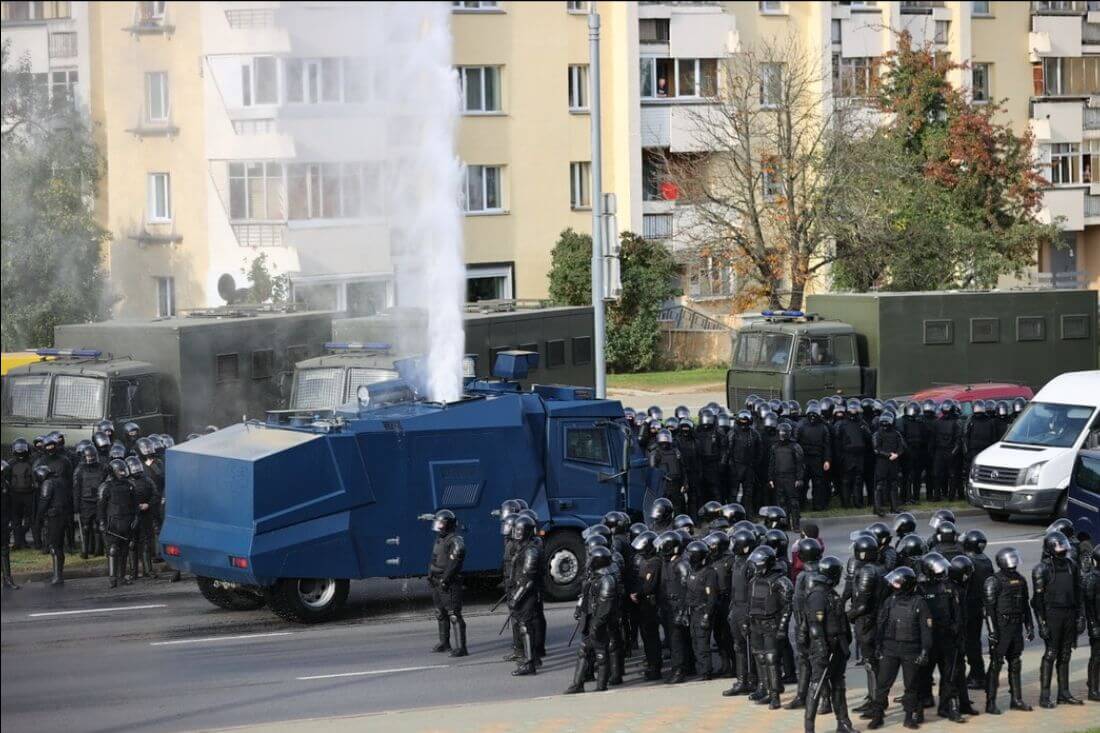 Acting Ministry of Interior and Russia’s national guard will discuss cooperation agreement. It is likely that these measures will lead to more sophisticated ways of repressions and control of political opponents in the territory of two countries.

Dozens of European diplomats will be forced out of Belarus by Friday October 9, according to Polish media. Acting Belarusian MFA requested to reduce the number of employees of the Polish embassy from 50 to 18, and from 25 to 14 in case of Lithuania’s embassy in Minsk. Following this news, three visa service centers in Minsk stopped their work.

Pilip Zariankin, the son of Vadzim Zariankin (a pro-Lukashenka politician who performs the functions of the head of city council in Vitsebsk) got released out of jail after having spent 13 days there for participating in peaceful anti-Lukashenka rally. It remains unknown whether any sanctions against his father will follow.

Blogger Eduard Palchys who was arrested recently, is denied the right to meet with his lawyer and family. No information is provided about his status or condition. The lawyer made 4 efforts over 10 days to meet her client, but jail authorities reject all applications. Eduard disappeared on September 29, and was later discovered by accident in Akrestina detention center that became widely known for its use of torture against inmates. Eduard, who was earlier jailed for his critical blogging, may be in serious danger, and global community has to rise his issue as soon as possible.

Apple forced Telegram app to shut down 3 channels used by the people of Belarus to expose the identities of law enforcement oppressors involved in repressions against the civilians. Spread of information about participants of repressions is a part of the people’s right to freedom of speech and is a security matter for Belarus civilians protecting themselves from punitive operations. Apple’s claim is inappropriate in given circumstances.

Journalists in Babruisk face ungrounded repressions in an alleged case of arson of police infrastructure.