Post-election protests continue for 80 days in a raw. So far, not a single day since August 9, 2020 was recorded free of state-orchestrated violence and repressions. Over 16,000 people have been detained since the elections day. There are at least 100 political prisoners acknowledged by domestic and international human rights groups. Zero cases were filed by relevant state institutions to investigate over 1,000 cases of torture practiced by various groups loyal to Aliaksandr Lukashenka.

On Sunday, October 25, Belarus witnessed some of the largest protest rallies in its independent history. According to nashaniva.by, one of the nation’s largest online media, up to 200,000 people joined peaceful march in Minsk on its peak. This number makes up to 10% of total population of Belarusian capital. The acting ministry of interior acknowledged the protests took place in all regional capitals on Sunday, too. Unlike usually, the officials representing Lukashenka’s regime refrained from providing the estimated number of participants of Sunday rally in Minsk.

On October 13, president-elect Sviatlana Tsikhanouskaya called for Belarusians to go on. a strike and start blocking major roads, using government shops and services and withdraw all money from their bank accounts if Lukashenka will not resign along with ending police brutality and releasing all political prisoners by October 26. Lukashenka refused to accept the requirement of this ultimatum. On Sunday, the presidential palace in Minsk was again surrounded by a convoy of BTR-80 armoured personnel carriers, water cannons, and military jeeps with heavy machine guns.

The acting ministry of Interior claimed to have detained at least 523 people in 19 protest events across Belarus on Sunday (at least 160 people were detained in Minsk). Among those arrested is a widely known conservative politician and former political prisoner Zmitser Dashkevich. The human rights group Viasna was able to identify only 216 people among those detained on Sunday. It is officially confirmed that OMON and other special units used ‘special means’ against the protesters, including stun grenades and rubber bullets. The participants and journalists spotted people in civil clothes using shotguns and stun grenades against the protesters. In at least one case, a person presumably affiliated with GUBOPiK (the Interior Ministry’s Main Directorate for Combating Organized Crime and Corruption), was spotted with Kalashnikov assault rifle when dispersing the crowd. The protesters were pointed at with guns by the representatives of the army (that was again deployed into Minsk city center) in at least one case.

After Lukashenka’s forces attacked the protesters, and people searched for refuge in nearby residential houses across Navavilenskaya street, in at least one case a group of OMON and GUBOPiK officials broke into a private apartment with no legal grounds or search warrants. This is an extreme violation of national law that includes trespassing and the violation of the right to inviolability of private housing. People inside the apartment were beaten. Some were removed out of the apartment. Media and opinion leaders compared this case to assault raids against the Jewish population hiding from Hitler’s stormtroopers in times of Nazi occupation.

Systematic abuse of power and growing atmosphere of impunity for OMON and GUBOPiK underline absolute default of legal system and the rule of law in Belarus. This indeed requires immediate external action and further pressure on Lukashenka to ensure he is unconditionally removed. Belarusian security services must be stopped by any means of international pressure. All individuals related to Lukashenka’s immediate economic interests and the interests of his family must be sanctioned as soon as possible.

Later in the evening of Sunday, arrests continued. According to our information, in a few cases law enforcement employees drove civil cars around Minsk shooting protesters with paintball guns – in addition to use of what they call the ‘special means’.

Numerous protest rallies of students and the elderly took place in Minsk and regional towns on Monday. At least 314 people (and up to 500) were reportedly detained on Monday, according to Viasna human rights center (most of them – in Minsk).

On Monday, nationwide strike has started. So far, the call to strike was partially successful, with greatest results achievements at Minsk Electrotechnical Plant, and Hrodna Azot (a major producer of chemicals in Belarus). There, before the strike has begun, at least 32 workers who stood at the entrance to the factory, were arrested and heavily beaten in riot vans by OMON around 7 am local time.

In other major factories, like MTZ (Minsk Tractor Plant) and Atlant (production of home appliances), there were major disturbances among the workers, but they hadn’t been brought to a standstill. Lukashenka’s regime claims that all factories work in regular mode. The photos and videos from factories prove otherwise. Riot vans and paddy wagons were on duty near and inside many state-owned enterprises in Minsk on Monday morning.

Despite riot police raids, Monday march of the elderly, that was supported by university students, gathered at least 5,000 participants. Many protesters were brutality beaten after 6 pm local time.

Since mid-October, numerous railroads were blocked by wiring the rails. On Monday morning, railroads were wired and blocked on the tracks near 6 locations: Zhodzina, Pamyshlitsa, Sciapyanka, Rudzensk in directions towards Baranavichi, Asipovichi and Maladzechna. On Tuesday, the number grew to 22.

China may face tangible economic consequences if railway transit via Belarus will be affected by the EU sanctions.

The head of Brest region officially acknowledged that the second wave of COVID-19 is heavier than the first one. 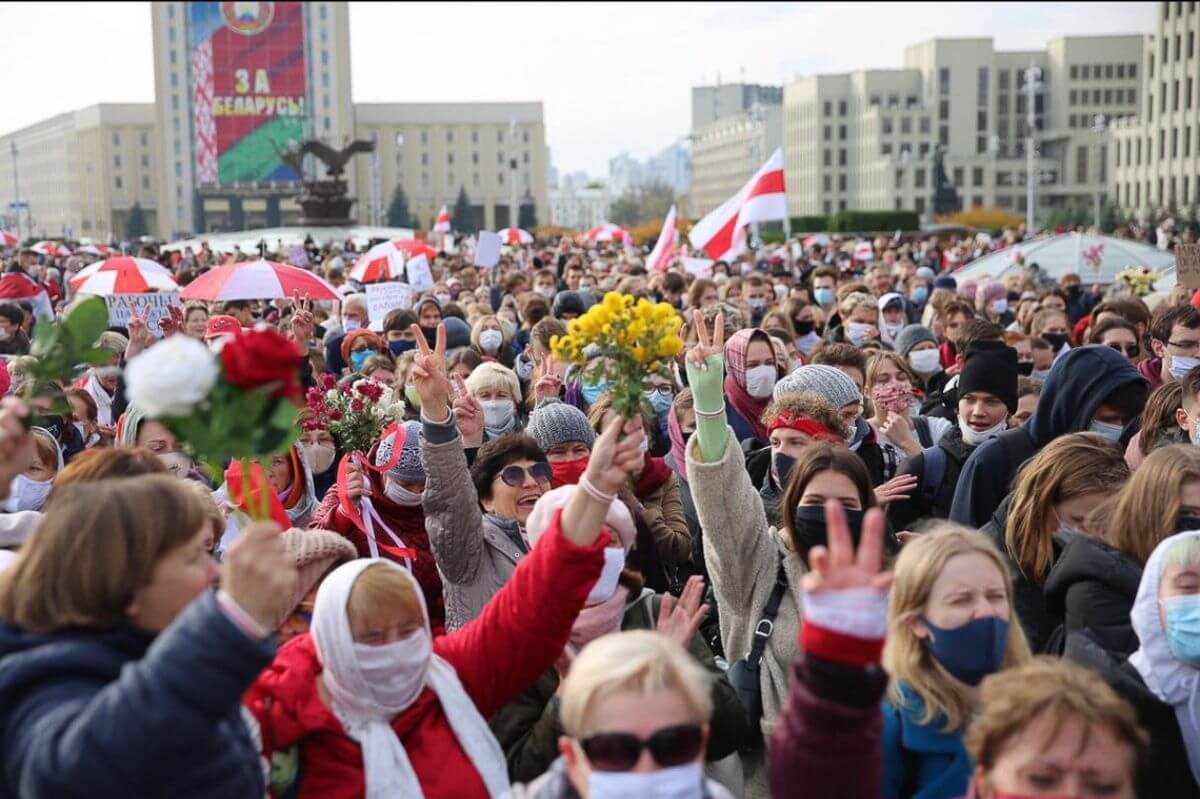 Last week, the European Parliament has awarded 2020 Sakharov Prize for freedom of thought to the democratic opposition in Belarus, led by president-elect of Belarus Sviatlana Tsikhanouskaya.

The EU is preparing the second package of sanctions and urges the regime of Aliaksandr Lukashenka to respect the people’s right to strike.

A team of journalists, human rights activists, IT workers, and volunteers launches an international media project August2020 (august2020.info/en) to collect and publish the evidence of people who suffered from law enforcement torture and inhuman treatment after the presidential elections in Belarus in August 2020.

On October 24 U.S. Secretary of State Mike Pompeo made a phone call to Lukashenka and urged for the full release and immediate departure from Belarus of wrongfully detained U.S. citizen Vitali Shkliarov. Pompeo further reaffirmed U.S. support for the democratic aspirations of the people of Belarus.

Belarus plans to launch the generation of nuclear power at its newly-built nuclear power plant (NPP) in Astravets between November 1 and November 10. So says a letter sent to Lithuania’s energy transit operator Litgrid by Lukashenka’s officials. On October 26, Lithuania’s President Gitanas Nauseda and Vice President of the European Commission Valdis Dombrovskis discussed security issues related to the Belarusian NPP. Nauseda urged to cancel the launch of the station that threatens the security of EU citizens and urged EU countries to refrain from buying any energy from this untrusted source. 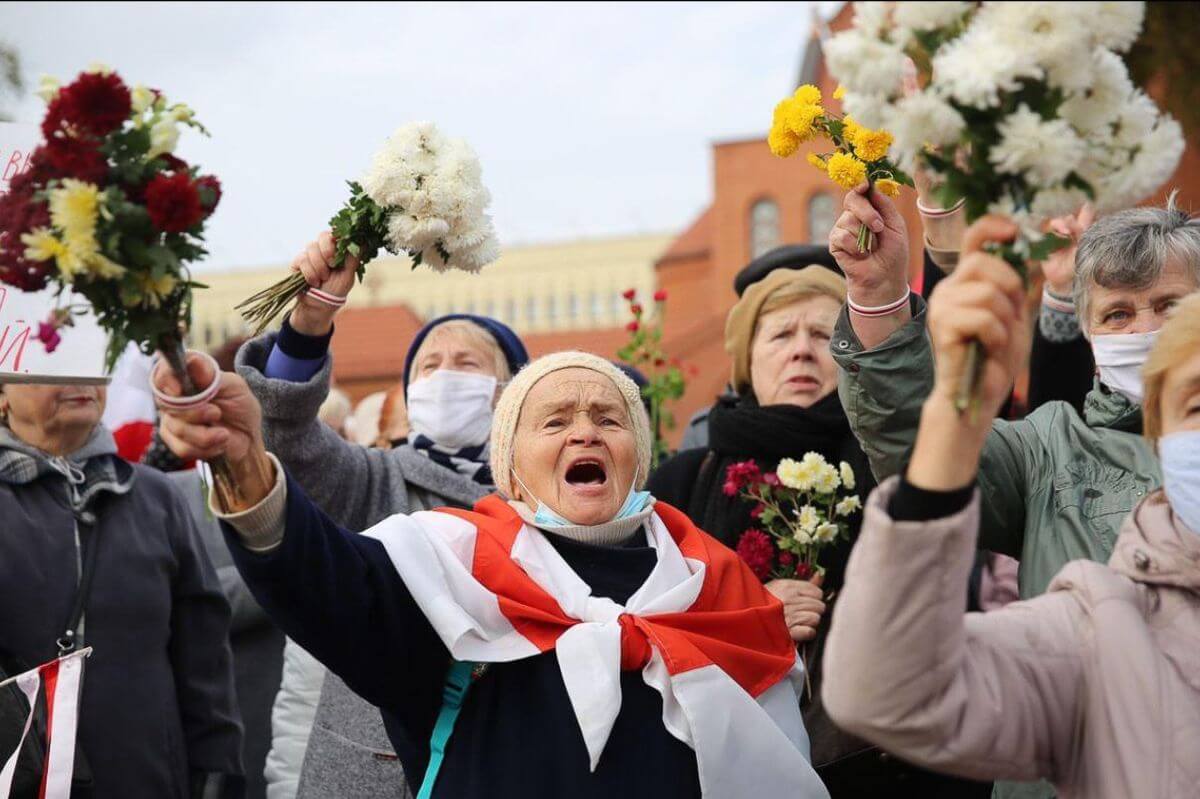 The regime puts pressure on private companies that joined the strike in solidarity with state workers. In Brest, the head of the city council Aliaksandr Rahachuk (appointed by Lukashenka) officially labelled the companies that were on a shutdown on Monday ‘the violators’.

Member of the Coordination Council, philosopher Volha Shparaha, escaped to Lithuania after she was sentenced to an extra 12 days detention upon release from initial 15 days arrest following her participation in peaceful rally for Lukashenka’s resignation.

Three people were fined and one was sentenced to 10 days in jail for commemorating the victims of Holocaust and laying flowers at Holocaust memorial in Slutsk (a town in Minsk region).

On November 12, the Supreme Court in Minsk will review tut.by’s appeal against three warnings issued by the ministry of information. The warnings became the foundation to deprive tut.by the official status of media which severely limited the rights and reporting privileges of tut.by journalists. Privately-owned Tut.by remains the most popular news portal in Belarus.

OMON dispersed a protest of high-tech industry workers near High Tech Park (HTP) Belarus. on Monday Numerous OMON employees were noted in HTP parking lot running around with shotguns – chasing IT specialists who took part in a peaceful solidarity chain near HTP office.

On Monday, Ilya Zhukavets, CEO of onliner.by (the second most popular news portal in Belarus, privately-owned) was detained in Minsk for standing in peaceful solidarity chain in front of his office.