In two new publications on our website, iSANS expert Maria Dawidowicz explains why Poland became one of the main targets of Russian propaganda, and how Russian propagandistic infrastructure operates within Poland. 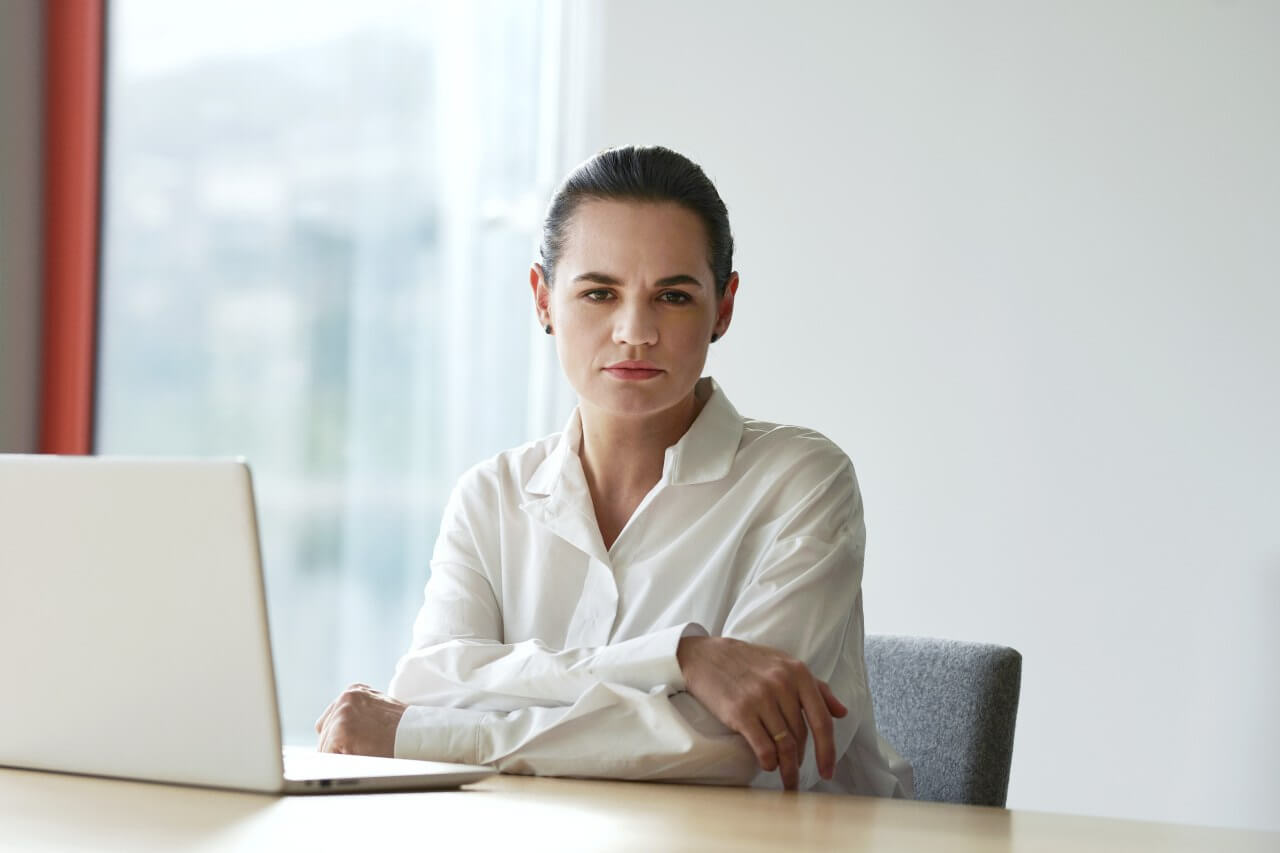 On Tuesday, 20 October 2020, president-elect of Belarus Sviatlana Tsikhanouskaya will be on an official visit to Poland. She will meet Poland’s Prime Minister Mateusz Morawiecki, Chief of Staff of the Polish President Krzysztof Szczerski, Ambassadors of Canada and the Netherlands, as well as representatives of the Coordination Council. On Monday, she met with Swiss Parliamentary mission in Vilnius and thanked Switzerland for introducing sanctions against Belarusian executives related to Aliaksandr Lukashenka.

Sviatlana Tsikhanouskaya, and her teammates Maryia Kalesnikava and Veranika Tsapkala were nominated for 2021 Nobel Peace Prize.

Post-election protests in Belarus continue for 72 consecutive days. On Sunday October 18, the 10th weekly Sunday march took place in Minsk city center along with 15 other political manifestations. Main demands of peaceful protesters remained the same as in the previous 3 months: unconditional Lukashenka’s resignation, end of political violence by Lukashenka’s security services, release of all political prisoners, and new fair elections.

Despite widely disseminated threats to use live bullets against peaceful protesters, up to 100,000 people again joined the protests. Prior to October 18 peaceful rally, at least two ‘law enforcement executives’ loyal to Lukashenka promised to use lethal weapons against peaceful protesters. Those are the head of Chief Department for Combating Organized Crime and Corruption (GUBOPiK / GUBAZiK) Mikalai Karpiankou and the head of Minsk OMON (Minsk Special Purpose Police Unit) Dzmitry Balaba.

Both GUBOPiK and OMON are directly responsible for the use torture and ungrounded violence against peaceful protesters and private property within post-election violence campaign. The relation of these units and other law enforcement agencies to post-election killings of protesters in Minsk and Brest must be thoroughly investigated as soon as possible.

Acting ministry of interior (loyal to Lukashenka) acknowledged the detention of at least 280 people across Belarus on Sunday. Human rights groups were able to identify at least 240 detainees from Minsk. 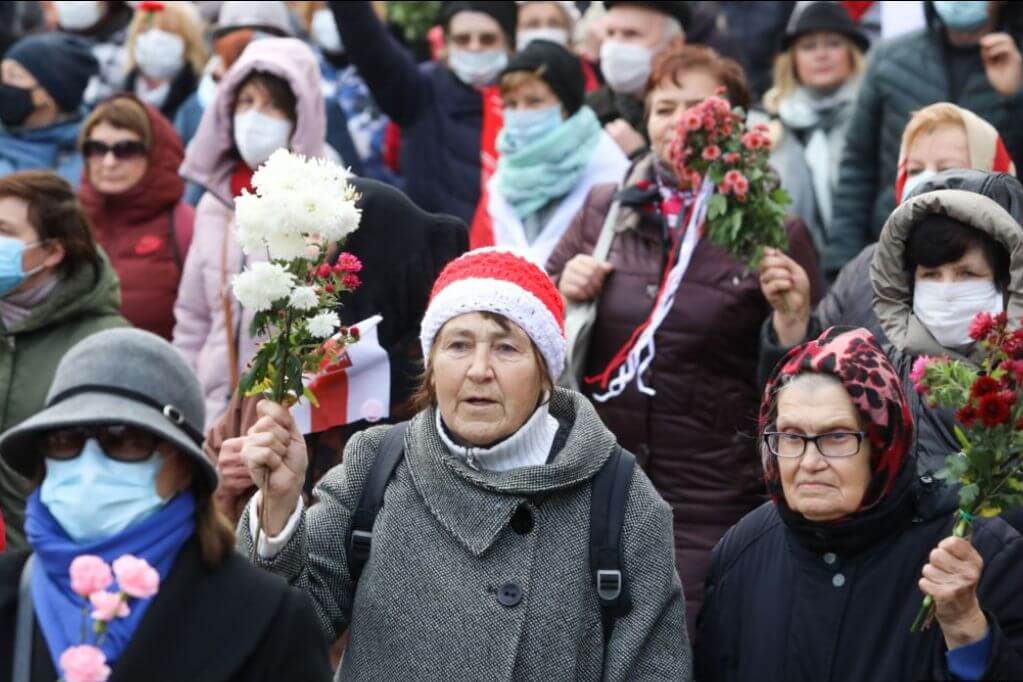 On Monday, October 19, a third traditional Monday march of retired people labelled ‘The March of Wisdom’ took place in Minsk (with smaller marches in a few regional towns). The march gathered thousands of elderly people, and was cheered by crowds of passers-by. The march was opposed by a state-orchestrated political manifestation of military pensioners that was organized with the use of budget funding and working pensioners who depend on state work. The participants were brought to Minsk by service buses of state security institutions and ministries from all regions of Belarus.

Three political prisoners were moved under house arrest from KGB pre-trial detention center. The transfer of political prisoners from pre-trial detention center of KGB towards house arrest must NOT be confused to release of political prisoners, and may not be regarded as any act of political dialogue whatsoever. Lawyers Illia Salei and Liliya Ulasava, as well as political consultant Vitaly Shkliarov will remain under conditions that amount to imprisonment, according to human rights lawyers. It has to be noted that US citizen Vitaly Shkliarov was reportedly tortured in detention where he was kept since late July 2020 on politically-motivated grounds. US State Secretary Mike Pompeo repeatedly demanded immediate release of Vitali Shkliarov.

There are already 94 political prisoners acknowledged by Belarusian and international human rights experts. Most of them were incarcerated on political grounds for peaceful expression of their political views since the beginning of 2020 elections campaign. So far, this is the greatest number of political prisoners in independent history of Belarus. Overall, at least 14,500 cases of politically motivated detentions were confirmed by journalists and human rights activists following August 9, 2020 wave of repressions.

On Sunday, the activists from Kaskad residential complex in Minsk raised what is claimed to be the world’s largest flag ever produced – 71 by 36 meters. 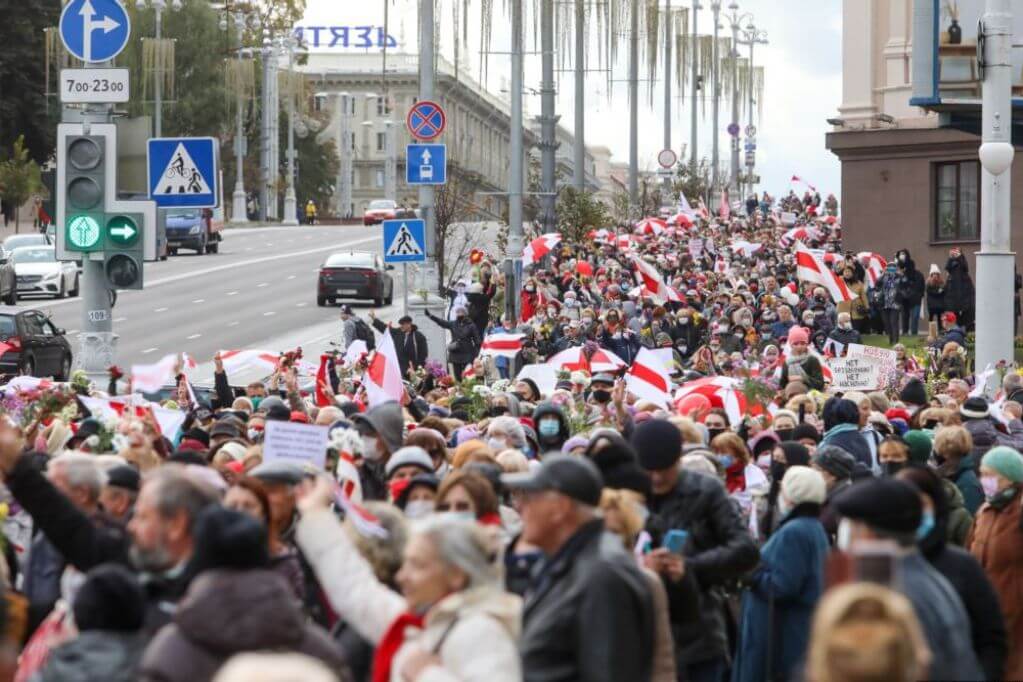 The supporters of former president Aliaksandr Lukashenka keep promoting a so-called constitutional reform. No reforms are possible until Aliaksandr Lukashenka resigns and faces justice for his personal responsibility in armed seizure of power on August 9-12, 2020, subsequent political violence, torture of prisoners, illegal detentions, falsification of all elections in Belarus after 1996, enforced disappearances of politicians and journalists in 1999-2020, and many more.

Any constitutional reform conducted by a closed circle of people personally dependent on Lukashenka (including the members of a so-called ‘parliament’ and ‘constitutional court’) should be considered as null and void by the international community. The so-called ‘constitutional reform’ is a totally imitative activity that contains NO dialogue between the old regime and its opponents. The so-called ‘reform’ is conducted by a closed circle of bureaucracy orchestrated personally by Lukashenka and both illegal and illegitimate ‘presidential administration’. No sustainable reform is possible until the end of peaceful political transit following Lukashenka’s unconditional resignation.

40 members of Belarus-based pro-Russian groups announced the creation of the organizing committee for a new pro-Russian political party, Soyuz («Союз», Rus.: Union). The party will be created following the promotion of party-building urge by Lukashenka in his recent public speeches related to the so-called ‘constitutional reform’. In April and May 2020, iSANS presented an extensive report on the agents of Russian influence in Belarus – many of them are now involved in creation of new pro-Russian political instrument that will aim to deepen ‘integration’ and promote pro-Russian activity and Putin’s ‘geopolitical gains’ (such as the annexation of Crimea), and will promote the ideology of Russki Mir in Belarus.

One of oil reservoirs at Svietlahorsk cellulose and cardboard works (Светлогорский целлюзно-картонный комбинат) exploded on Monday. At least one person is officially reported dead following the incident. A $850 million worth factory was built by China CAMC Engineering Co. with money from Chinese state loans. An ambitious, but unsustainable, project became a fiasco of Lukashenka’s rule.

Belarusnafta, a state-owned oil company, aims to stabilize its domestic oil production within Belarus at 1.77 million tons by 2023. 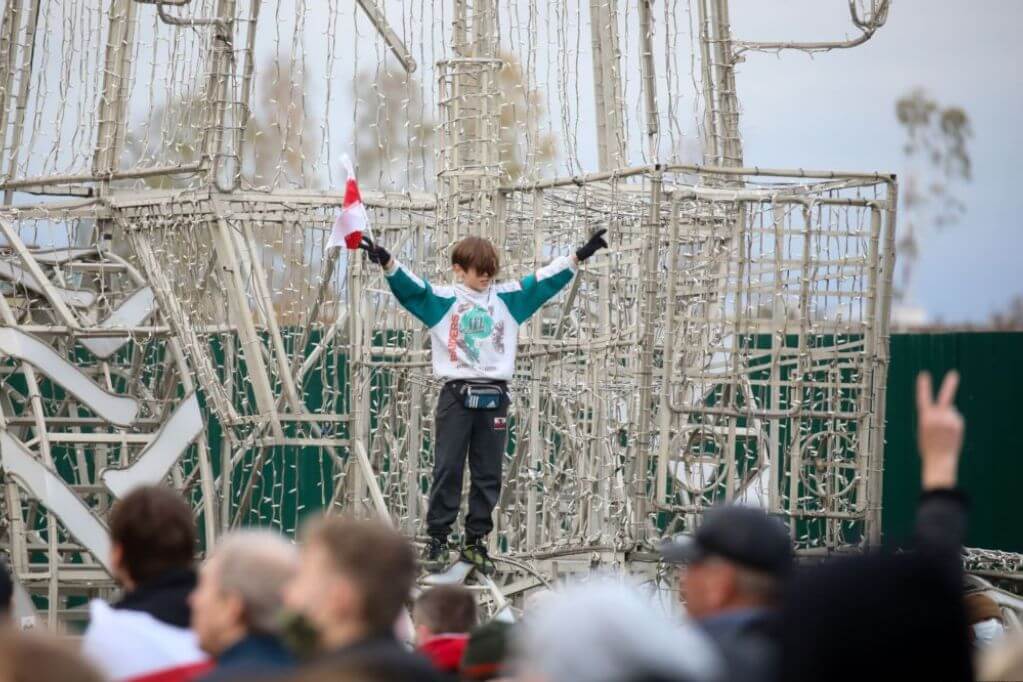 Ukrainian media claim that a major Belarusian IT business, Wargaming, relocated up to 300 employees to Ukraine (10 to 15% of Minsk team). The company does not confirm or deny this information. Since August 9, over 2,000 IT professionals left Belarus and relocated to Poland and Ukraine only.

Epidemic situation is worsening: Belarus entered the second phase of COVID-19 pandemic, and the number of registered cases continues to grow. Acting ministry of healthcare acknowledged there were 592 new cases on Monday. As this chart prepared by reform.by, Belarus is returning to peak level of late April 2020, and may again reach the number of cases recorded at 2020 peak levels in the next few weeks. Since state statistics were being manipulated since the very beginning of the pandemic, the actual numbers are a lot higher.

On Tuesday, Aliaksandr Lukashenka (the former president of Belarus and the leader of an armed group that  forcefully seized the power in Belarus on August 9-12, 2020) plans to announce the names of some nomenclature leaders who might get new positions.

On Tuesday, October 20, the European Parliament will consider the format of further relations with Belarus. MEPs will formulate recommendations to the Council, the Commission and the Vice-President of the Commission/High Representative of the Union for Foreign Affairs and Security Policy on further bilateral relations with Belarus. The draft of the recommendation is available here.

Inter alia, recommendations may include the expansion of sanctions, immediate halt of any payments to acting government, state bodies and other relevant institutions loyal to Lukashenka, and an urge to ‘treat the issue of the Astravets Nuclear Power Plant with urgency as it is approaching the start of its operations’ that may cause ‘potentially disastrous consequences of an accident for the whole region’.

On Monday, Lithuania’s president Gitanas Nauseda and the president of Swiss National Council (parliament) Isabelle Moret discussed the situation in Belarus during the visit of the Swiss parliamentary delegation to Lithuania. It should be noted that Swiss and Belarusian dual citizen Natalia Hersche was arrested during September 19 peaceful rally, and is facing criminal charges.She was aknowledged a political prisoner. 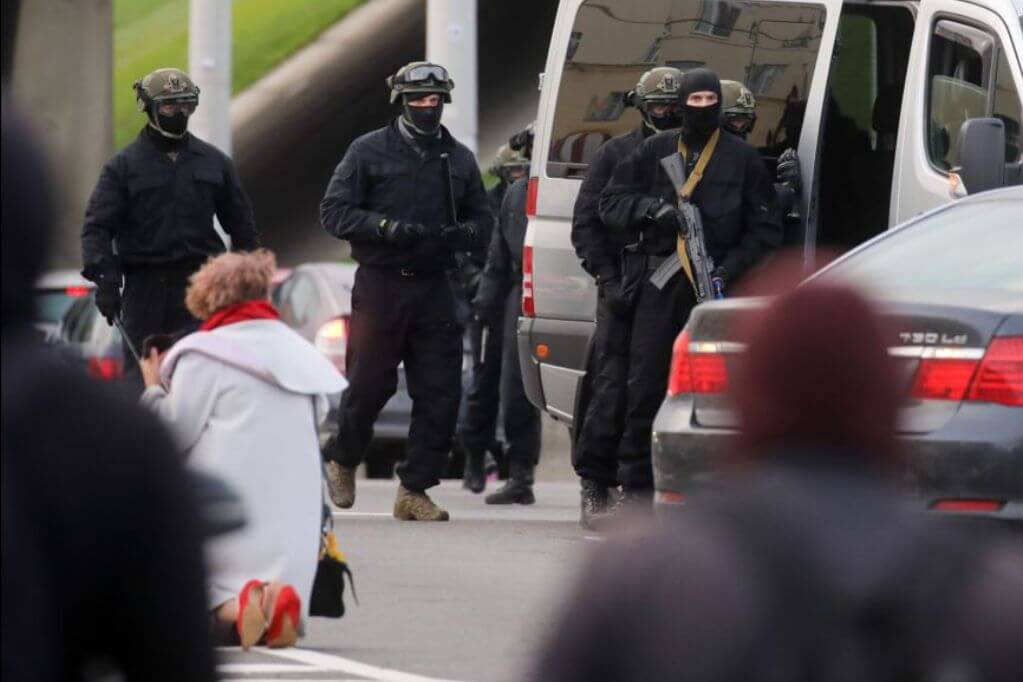 State security units loyal to Lukashenka continue to use semi-automatic Russia-produced hunting weaponry at the times of mass protests. This weaponry is being used to disperse the crowds of peaceful protesters since mid-September.

A 63 year old Alena Gnauk was brutally kidnapped in Brest: a group of men dressed in the uniform of Belarusian police surrounded her near the court building where her case was considered. She was violently pushed into what looked like Belarusian police car. Alena was released from jail on Monday following 15 days in detention (that she was assigned for peaceful expression of her political views during peaceful rally of October 4). On Monday, she was brought to the court where her other case was reviewed: on August 30, Alena stood on her knees between the protesters and the police and read a prayer ‘to avoid the violence’. This could’ve been the reason she was kidnapped after the hearing.

Miner Yuri Korzun was sentenced to extra 15 days in jail following his first 15 days term. On September 10, Korzun tied himself to mining equipment underground and refused to leave Belaruskali mine to protest against the political situation in Belarus.

Former senior specialist of Brest city council’s ideological department, Viktoriya Drahabetskaya, and her husband Dzmitry Lazarchuk, were each sentenced to 15 days in jail for peaceful expression of their political views during a rally against police violence of September 13, 2020. 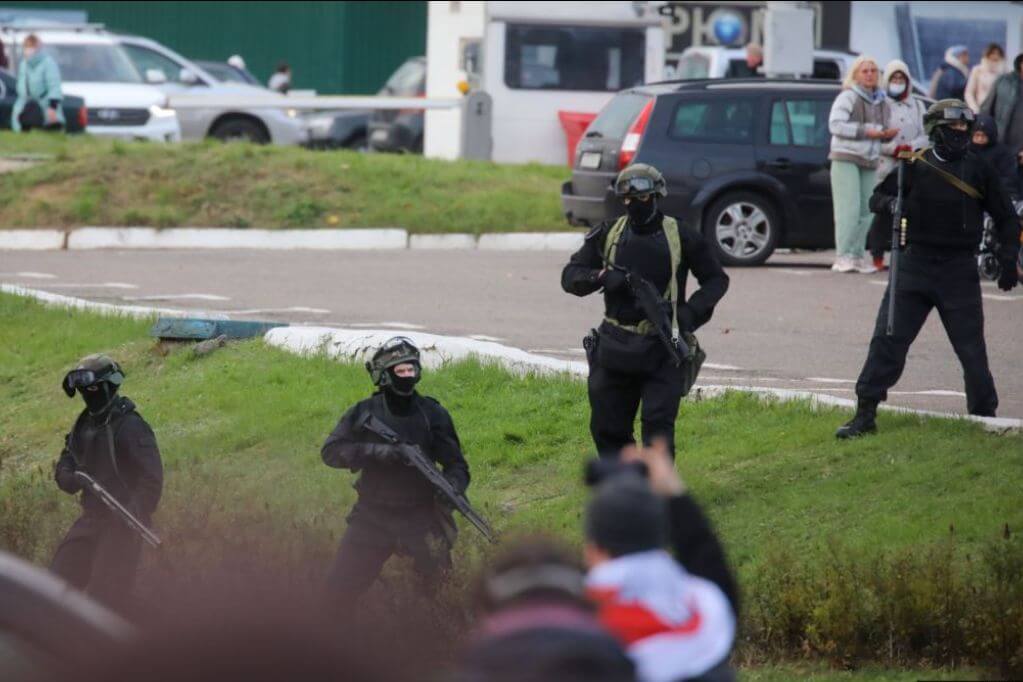 Journalists remain being threatened and intimidated by state security employees. Media workers are being prosecuted for executions of their professional duties on an almost daily basis. Journalists Maksim Khliabets and Raman Chmel are waiting for the hearings in Brest. Aliaksanr Liubanchuk, Artsiom Mayorau, Vadzim Zamirouski, Usevalad Zarubin were sentenced to 15 days in jail each. Female journalists Darya Spiavak and Alena Dounar were sentenced to 13 and 30 days in jail for their presence in political rallies when conducting their direct journalistic duties. Dzianis Yakshtas was sentenced to 15 days in jail, and then was fined with BYN 540 (over $250).

Numerous students and journalists were detained on Saturday October 17.

66-year-old pensioner Siarhei Kuzniatsou from Minsk was sentenced to 18 months under home arrest after he called the police and said that Aliaksandr Lukashenka should be held accountable for insulting Viktar Babaryka. Kuzniatsou’s house was assaulted by OMON and the man was found guilty of opposing the law enforcement although video recordings prove otherwise – the elderly man was trying to find a refuge inside his own apartment after suddenly OMON broke in.