Daily protests and acts of peaceful defiance by the citizens of Belarus continue for 95 consecutive days.

The forth protester was killed by law enforcement last night. A 31 y.o. Raman Bandarenka from Minsk had been kidnapped by a group of law enforcement officials in Minsk in the evening of November 11 from his own block. He was tortured in a mini bus operated by plain-clothed state security officials in balaclavas, and later brought to Central RUVD (Центральное РУВД) detention center of the interior ministry. Soon he was delivered to hospital in critical condition with multiple severe injuries. After an operation and hours in coma he was declared dead in the evening November 12. Thousands of people approached the block where he was kidnapped, and more join solidarity campaigns all across the country. Meanwhile, law enforcement continues to intimidate and harass those mourning.

It is of no doubt that newly-announced minister of interior, Ivan Kubrakou, chose a scorched-earth policy in relation to the civil population in Belarus, and state-orchestrated violence is fast accelerating towards the levels of August 9-13. The scope of repressive instruments in the last two weeks again includes very widely-applied torture, abductions, and first homicide in three months since at least three protesters were killed in August 2020. 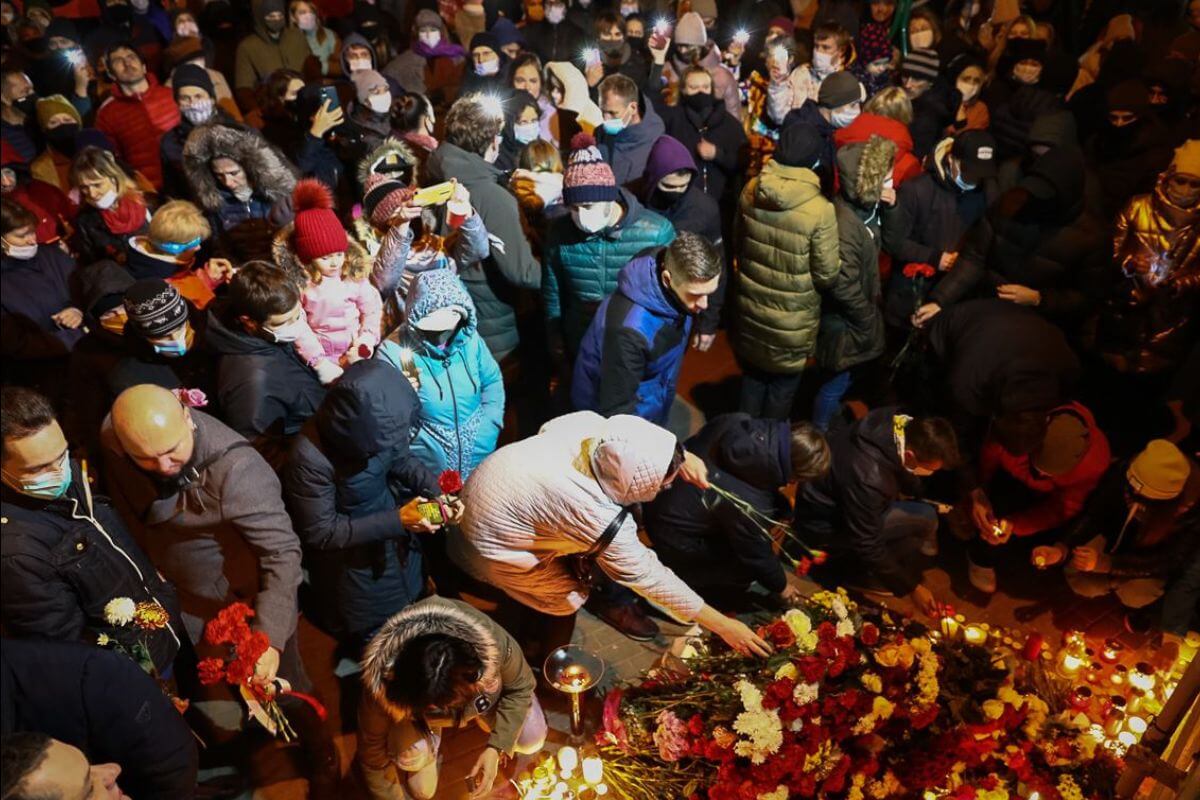 Since August 9 election day, up to 20,000 people faced politically motivated detention in Belarus. This makes ongoing political repressions in Belarus the largest campaign of political persecution in the last four decades of European history. The number of politically motivated arrests in Belarus over the last 95 days is now two times higher than the number of people interned in socialist Poland during 1981-1983 martial law repressions.

From the historical perspective, over just three months following August 9 elections, the regime of Aliaksandr Lukashenka detained 25% more people than the dictatorship of António de Oliveira Salazar in Portugal arrested over 36 years of its existence. Between 1973 and 1989, it would’ve taken Eastern German regime led by Eric Honecker an average of 5 years to arrest as many civilians as were detained in Belarus over the last 12 weeks. To say more, the scale of politically motivated detentions in Belarus is now higher than the rate of arrests at a peak of Stalin’s purges in mid-1937 in communist BSSR.

Current situation of oppression in Belarus is truly unprecedented, and requires immediate and firm pressure on the acting regime, and personally on Aliaksandr Lukashenka, who must unconditionally resign to avoid Belarus from turning into the largest «grey zone» in modern Europe, and stop further escalation of repressions – including the use of torture and inhuman treatment against civilians.

Three months after three protesters were killed by the employees of interior ministry in three separate case, not a single criminal case was started by acting law enforcement to investigate the details. The families of Aliaksandr Vikhor (likely, killed in detention center), Aliaksandr Taraikouski (killed with shotgun shot at a close range, see photo below), and Hennadz Shutau (killed with pistol shot in the back of his head at a close range) are provided limited information on reasons of death, and were denied the right to legal protection. Absolute impunity of law enforcement and state representatives stimulates repressions and inhumane treatment of protestors and inmates of detention centers. 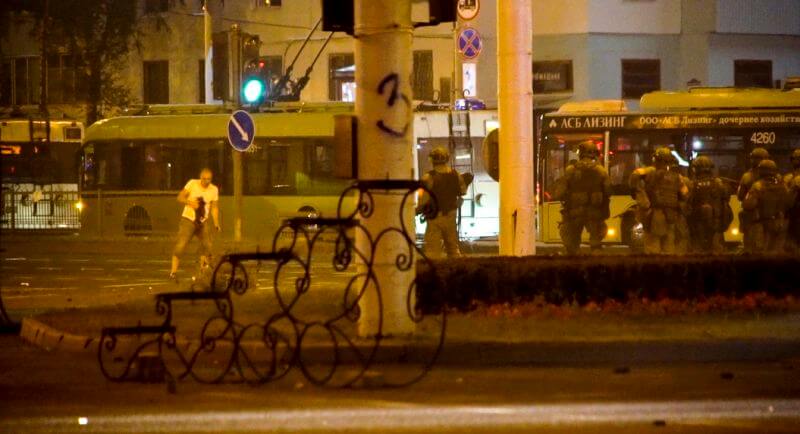 On November 11, the People’s Anti-Crisis Commandment (led by Pavel Latushka) published two basic scenarios for the transit of power in Belarus. The document formulates the conditions of dialogue with the authorities, and transit scenarios based on the course of this dialogue between the former president of Belarus Lukashenka and president-elect Tsikhanouskaya.

On November 10, acting ministry of health reported over 1,000 cases of COVDI19. This “psychological number” was avoided by the authorities during spring peak of the pandemic. Although Belarus health ministry officially claims slightly 100,000 confirmed cases of COVID19 in 2020, acting deputy prime minister Ihar Petryshenka, acknowledged that up to 20% of the population of Belarus have already developed collective immunity from COVID19 after the first wave. This claim proves the government of Belarus intentionally manipulated the statistics to decrease some 1,9 million cases to 100,000 in official reports. 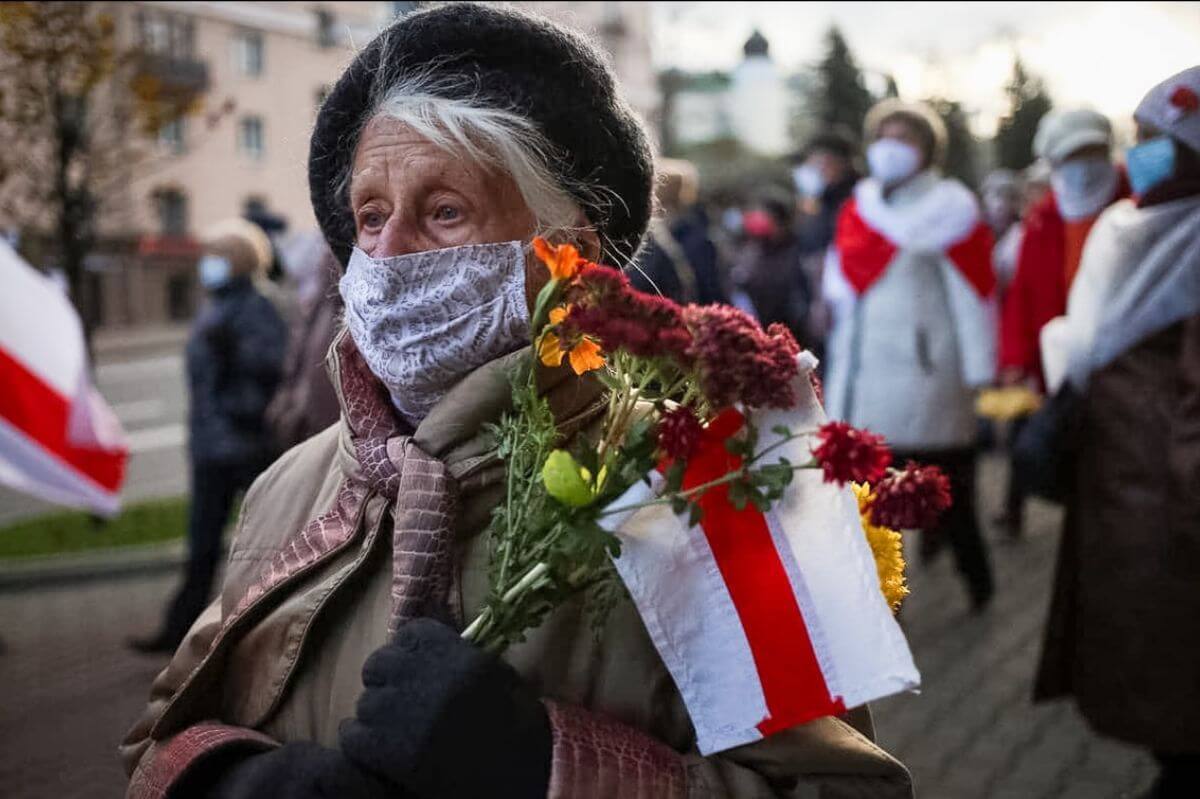 The second wave of COVID19 pandemic hits Belarus even harder, and the acting government is left alone with no volunteer support (many volunteers who helped state in spring were arrested or forced to exile the country) while the ministry of interior conducts targeted arrests of medical workers. 40+ medical workers were detained on November 7. On November 11 chief infection disease doctor of Minsk, Mikita Salavei, announced he is joining the Coordination Council due to lack of trust to the regime of Aliaksandr Lukashenka.

Since the last week, 25% of Belarusian regions (mostly in the East and North of Belarus) introduced obligatory mask regime due to COVID19 pandemic. Since August, no effective measures were introduced to stop the spread of the disease on a mass scale while the pandemic was in fact ignored by major medical institutions despite reports of growing cases by media and activists. While the official number of lethal cases is reported on the level of slightly 1,000 people, the actual numbers of COVID19-related deaths in Belarus may exceed dozens of thousands by now.

On November 10, acting ministry of energy acknowledged that Belarusian Nuclear Power Plant ceased to generate energy into national energy system. Two days after the station was officially launched, it was stopped due to an incident with power plant’s measurement equipment. The equipment now requires replacement. The acting government did not inform the public of the incident until it became widely known via independent media. This is yet another confirmation of its danger to the security of the whole CEE region and the Nordics. 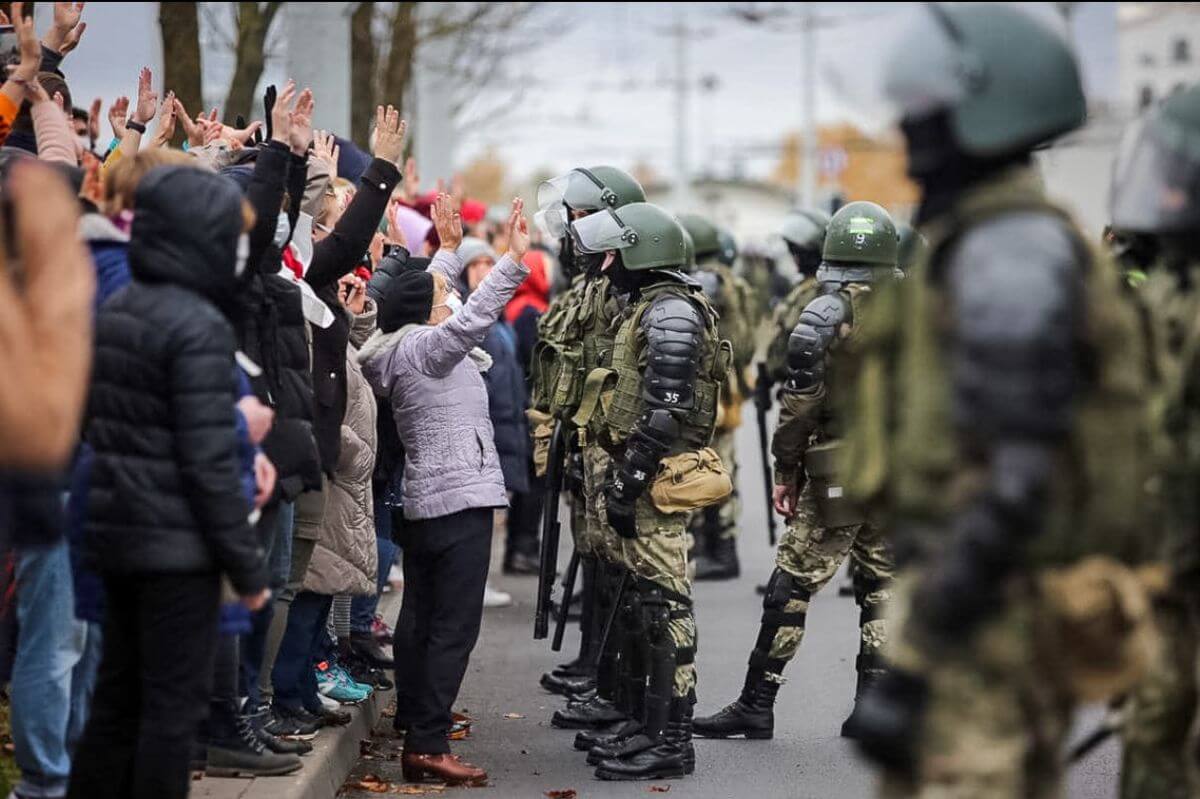 IPM research center (Minsk), an economic think-tank, published the results of its online poll on the moods of business in Belarus. 72,2 percent of participants do not expect any increase of industrial production in the upcoming months. Managers of business in Belarus generally expect the conditions will become worse nationwide, and consider doing business in Belarus risky due to macroeconomic instability (including currency fluctuations), economic uncertainty, no trust to national legal system, and low demand.

Rosatom, Russia’s nuclear energy holding company, was offered to open its permanent office branch in Belarus. The initiative was announced by the former president of Belarus, Aliaksandr Lukashenka during his meeting with Rosatom general manager Alexei Lihachov.

Although Voskresensky claimed to have agreements with the Coordination Council, the latter issued an official statement notifying the public that they did not have any negotiations with Voskresensky. President-elect Sviatlana Tsikhanouskaya named Voskeresensky a “political impostor” and stated again that she and her team will not participate in imitative dialogue promoted by Belarusian authorities through Voskresensky to legitimize Lukashenka.

In January-September 2020, Belarusian economy failed to match four out of seven key performance indexes. According to acting prime minister Halouchanka, the number of unprofitable organizations grows while net profits decrease nationwide. 2021 budget will be drafted with deficit, and, according to acting minister of finance Yuri Selivestrau, the government plans budget cuts. In 2020, the budget will end up with up to BYN 3 billion (circa $1.2 billion) losses. Earlier, though, the ministry of finance reported republican budget recorded losses at BYN 1.8 billion (ca. $700 million) and state governance budget losses at BYN 2 billion ($783 million) in January-September 2020 only.

Hrodna Azot management continues efforts to launch two factory workshops (ammonia-4 and carbamide-4) that were shut down on November 9 due to major equipment malfunction. Workers at Hrodna Azot are currently the leading force of national strike movement. 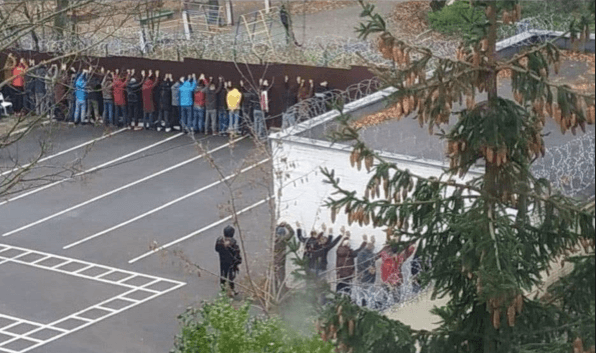 Member of the Coordination Council’s presidium, Maryia Kalesnikava, is denied legal protection and her right to correspondence for 20 days now, according to her lawyer Lyidmila Kazak. Kalesnikava was kidnapped on September 7. KGB tried to forcibly remove her out of Belarus threatening her with execution. Kalesnikava refused to leave Belarus and ripped her passport into pieces on Belarus-Ukraine border. After her wheeabouts remained unknown following this incident, she was later discovered at a detention center and is now facing ungrounded criminal charges.

Human rights center Viasna reports that acting authorities initiated 900+ criminal cases against political opponents in the last six months. Human rights activists were able to identify 456 people subject to criminal prosecution in relation to dissidents and participants of protests. Over 121 of these people are already acknowledged as political prisoners.

The latest acknowledged political prisoner so far is Eduard Palchis, a popular blogger. He disappeared on September 29. A day later he was found in a detention center at Akrestsin Street. Later he was sentenced to 30 days of administrative arrest. On October 27, Palchis was supposed to be released after serving his sentence, but remained incarcerated. On November 6, he was charged under Art. 293 of the Criminal Code (organization of mass riots, accompanied by violence against individuals, pogroms, arson, destruction of property or armed resistance to representatives of the authorities).

On November 10, the acting government of Belarus blocked accounts of police violence victims who received financial support from BY_help national solidarity campaign. According to Aliaksei Liavonchyk, the coordinator of of BY_help, after the accounts were blocked, the state expropriated BYN 1.4 million (over $ 600,000) from deposit accounts of previously repressed people and torture victims – without any explanations. The protesters urge to block access of the acting authorities to SWIFT since Belarusian bank system is now used to execute political repressions and steal money without legal grounds – instead of performing purely financial functions.

Eduard Babaryka, the son of presidential candidate Viktar Babaryka remains in KGB jail since June 18, 2020. Over 4,5 months he is denied his right for freedom of correspondence. Despite high volume of letters that people from Belarus and abroad send him, Eduard was only allowed to read letters from family members and a few close friends.

The USA have not yet made the final decision on whether it will send new ambassador to Belarus, according to George Kent, Deputy Assistant Secretary of State for European and Eurasian Affairs). The United States supported the Moscow Mechanism’s report on Belarus. James S. “Jim” Gilmore III, U.S. ambassador to OSCE, named stealing away and abducting political prisoners without charge and without a legitimate, real law to support that is now happening in Belarus “an act of domestic terrorism”.

So far, 17,500 people urged the US and the EU to add OMON and GUBOPIK units of Belarus interior ministry on the list of terrorist organizations via an online petition.

The United States are now considering new options to put pressure on acting state officials of Belarus, according to the US Deputy Secretary of State Stephen E. Biegun.

On November 6, the UK enforced new sanctions against 12 individuals including Aliaksandr Lukashenka. The total number of sanctioned Belarus citizens engaged in election frauds and atrocities against the civilians reached 59 people. 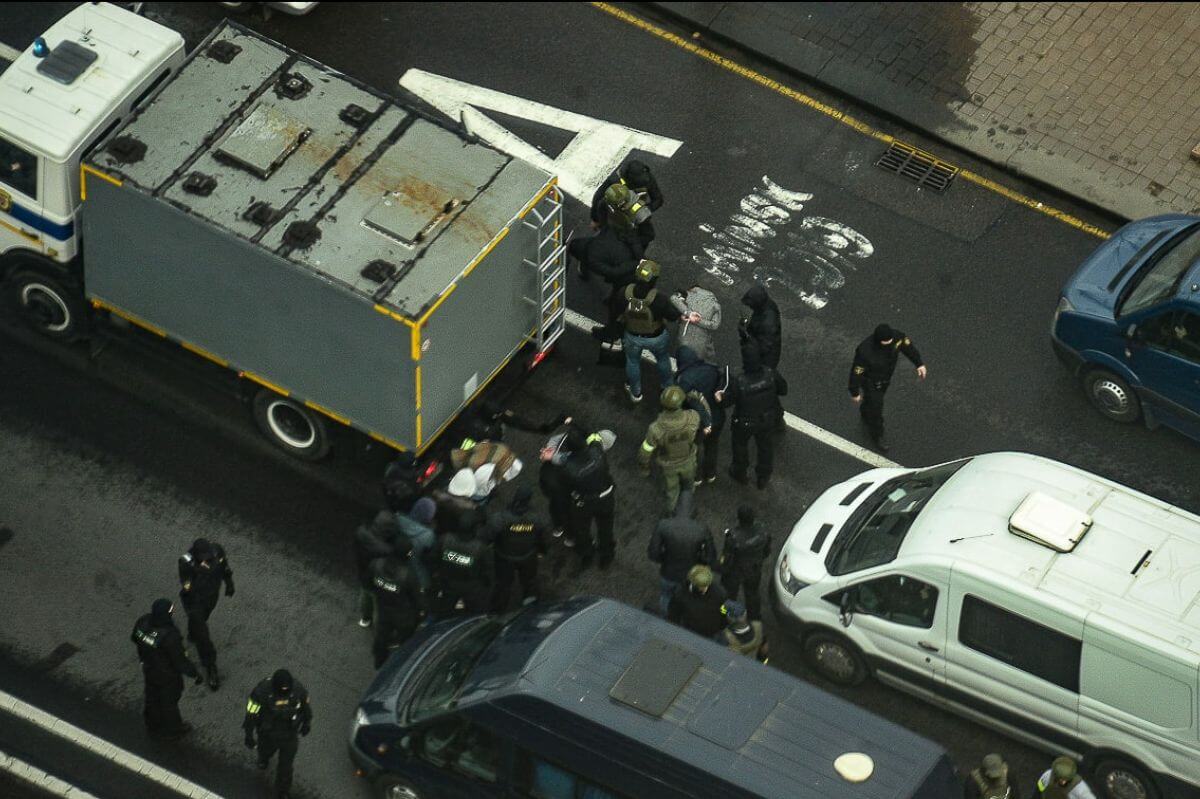 The UK expelled two representatives of Belarus MFA in response to the unjustified expulsion of two British diplomats from Belarus earlier this week.

On November 18-19 IIHF will consider removing World Ice Hockey Championship from Belarus. IIHF should not run an international sporting event in a country that imposes severe political persecution of national teams and individual sportspeople for openly expressing their political views.

PEN International expressed its solidarity with Belarusian writers, artists and cultural workers targeted in repression against the democracy movement.